Vietnam has a quite good transportation system, with a wide road, train and airport network. However, like in other SEA countries travelling in Vietnam is notoriously slow, so the saying less is more still applies in Vietnam.

There are 3 international airports in Vietnam: HCMC, Hanoi and Danang. Phu Quoc was until 2015 an international airport as well, but currently there are no international flights arriving or departing. There a quite a number of national airports throughout Vietnam: Buon Ma Thuot, Ca Mau, Can THo, Chu Lai, Con Dao, Dalat, Dien Bien, Dong Hoi, Hai Phong, Hue, Nha Trang, Phu Quoc, Pleiku, Quy Nhon, Rach Gia, Than Hoa, Tuy Hoa and Vinh. So you can reach most parts of Vietnam by plane. Only the area west and north of Hanoi is airport free.

For domestic flights you can either use the country’s airline Vietnam Airlines (www.vietnamairlines.com) or the low-cost airlines VietJet Air (www.vietjetair.com) or Jetstar Pacific (www.jetstar.com). I flew a few times with Vietnam Airline and VietJet, and all 7 flights were ok, with only one flight with Vietnam Airlines delayed by 2 hours. The reviews of Jetstar is not very good, so I have avoided them so far. However, in general the % of delayed flight is quite high in Vietnam, so it is highly recommended to spend the last night in Vietnam in the place of your flight home. The risk of missing your flight home due to a delayed domestic flight is not worth it and can become very expensive.

Most international airlines fly into HCMC, with the usual stopovers. Vietnam Airlines offer non-stop flights to several European and American airports. Some airlines like Emirates also offer flights to Hanoi as well. So if you plan travelling from north to south Vietnam, it it might be worth to see if you can fly into Hanoi, and leave from HCMC. Several Asian low cost airlines like Nok Air and Air Asia also serve HCMC, Hanoi and Danang.

So far I flew with Air China and Thai Airways to Vietnam, and I was surely impressed with Thai Airways as they offered shorter layovers in Bangkok. Bangkok is in general a great transit airport.

Overall, flying is a good option and affordable method to travel through Vietnam.

If you have a connecting flight straight after arrival in Vietnam to your final destination in Vietnam on a different ticket I would advise having around 3 hours or more between flights as you have to pass immigration, get your bag and checking in again (last check-in 40 minutes before departure). During peak times waiting time at immigration can be longer. If you are flying on one booking I would be less worried, as the airline will just put you onto the next flight. 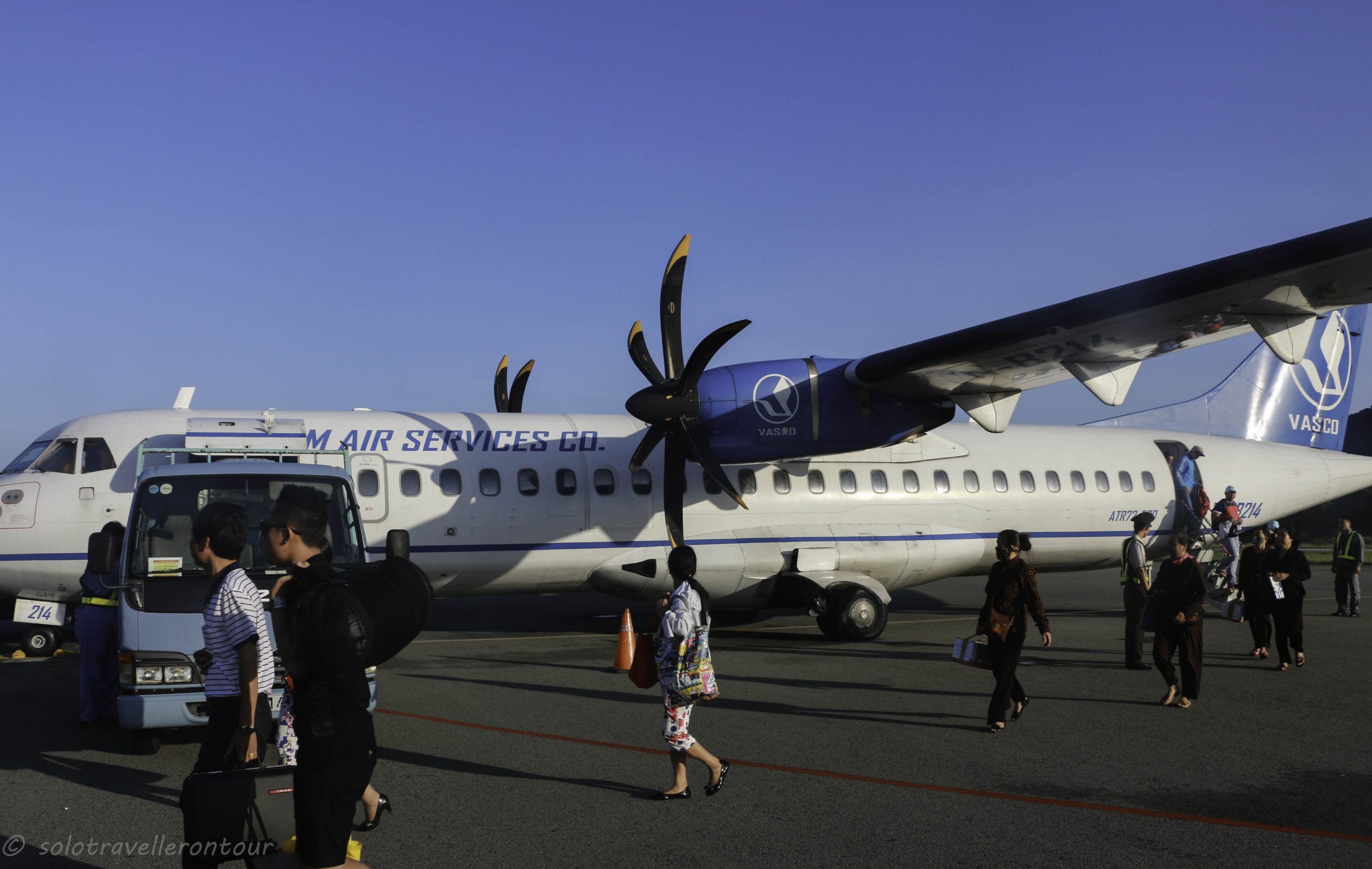 A great way to travel through Vietnam is by train. In theory you could take a train from Lao Cai in the far north to HCMC in the south, stopping at the mayor cities of Vietnam along the way, including Hanoi (where the train from Lao Cai stops, and the Reunification Line to HCMC starts), Dong Hoi, Hue, Danang, Nha Trang Phan Thiet and HCMC. 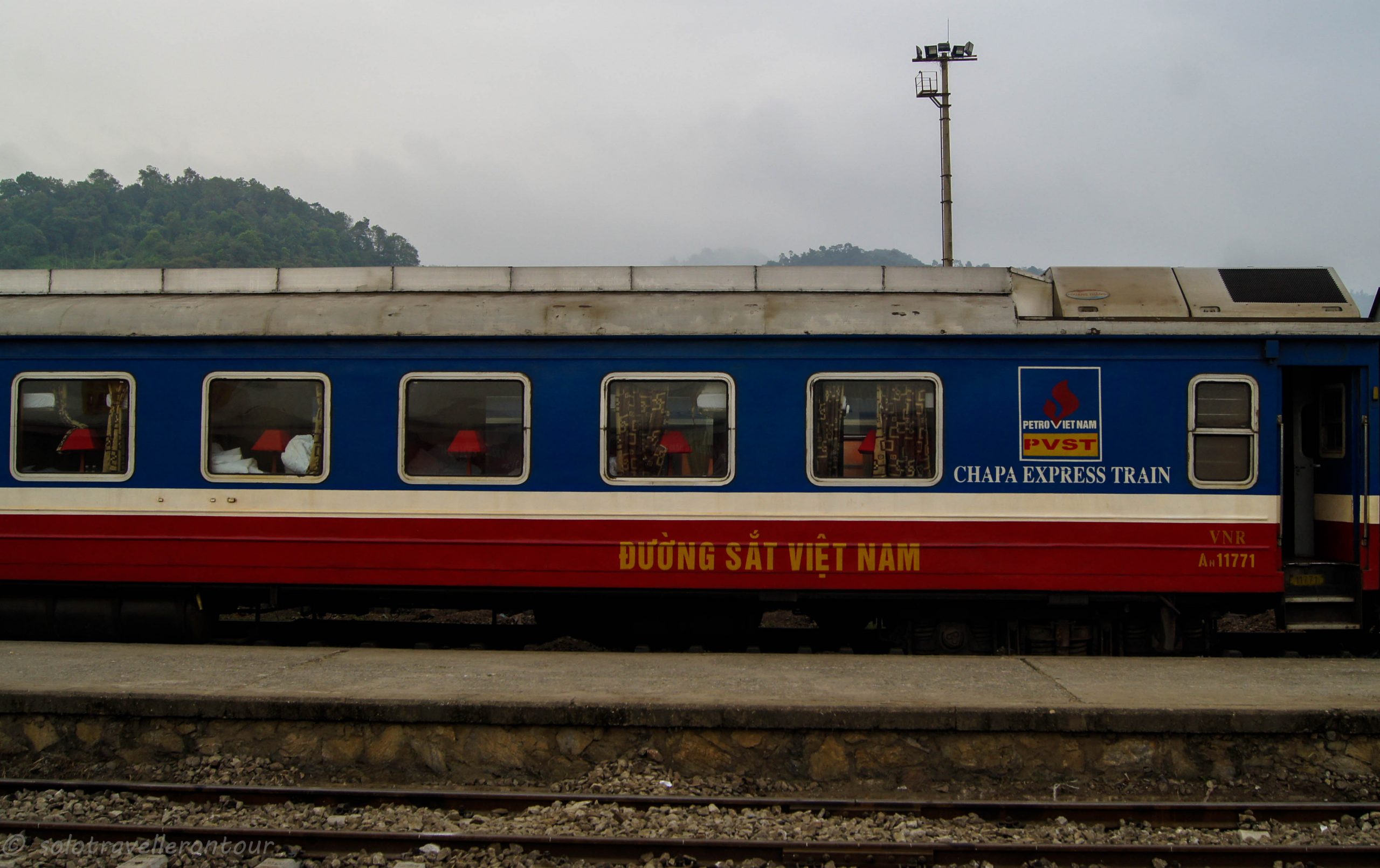 For a short journey of 3-4 hours a soft seat is perfectly fine. I found the seats comfortable, in some trains the A/C might be on the cold side,, and some trains have a TV on. If you are on the train in the evening you will get a pillow and a blanket. On the TN1 train the A/C was not very strong, and it was very hot in the carriages during the day time.

For longer journeys (especially when travelling over night) the soft berth is a better option. I prefer the lower berth, as you feel the movement of the train more in the upper berth. THe A/C can be a bit cold, so a long sleeve shirt might be useful. People often report about dirty carriages and toilets, but I found the 4 overnight journeys (including a 19 hour trip from Danang to HCMC) comfortable and it was clean. However, if you get onto the train in the middle of the journey I would ask for two new sheets to replace the cover and the blanket as others might have been in your berth. Please note, unless you buy all berths in a compartment you will share it with others. It is a nice way to meet other travellers or even locals. If for some reason you do not want to share, you have to buy tickets for a whole compartment. 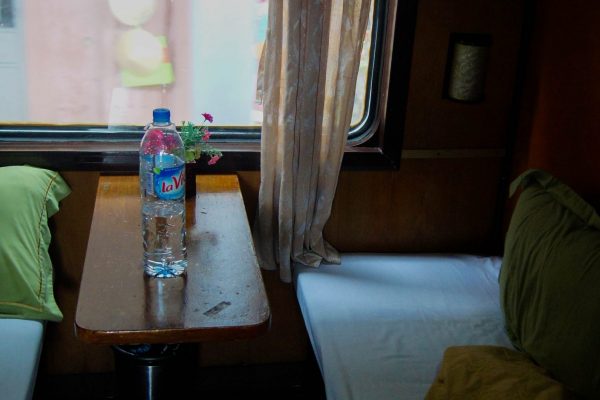 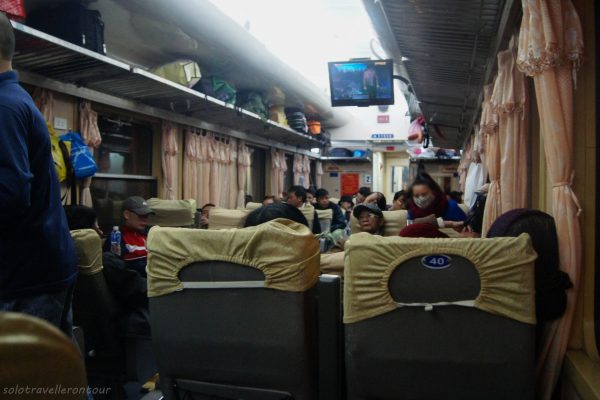 Soft seats carriage - even with TV

On some trains between Hanoi and Lau Cai; Hanoi to Danang and between HCMC and Nha Trang you might find some privately owned carriages that offer better berth, and even two-berth compartments. They are more expensive as well. I never used them, as I am always happy on the standard carriages.

In some trains you will also find third class carriages with hard seats. They are more local trains, but they could be an option for journeys like between Hue and Danang, as you can open the window to take pictures. All trains leaving Ga Long Bien, Hanoi to the north or east only have third class carriages.

Tickets can be bought at all train stations in Vietnam. If you want to book ahead (might be necessary to get a ticket early before NYE or Tet) contact your hotel or agency to get the ticket for you. Apparently there is only one way to book a ticket online via http://www.baolau.vn/. However I have not used them so far, so I cannot recommend them or advise against them.

Train travel might be slow, it still one of my favourite ways to travel (well, nothing beats riding a motorbike), and I would at lest once use the train for an overnight journey. In addition of seeing the lovely scenery (which looks nicer than sitting on the plane) you might also meet interesting people (again, how often do you speak with other people at the airport or on the plane – but will do it on a train while having a beer). I never had any issue with the toilets and compartment. While the 19 hour journey I took from Danang to HCMC might not be the best idea for people with lack of time, do no discount train travel. I hope I will be able to do some of the train journeys who have evaded me yet.

Like in other SEA countries buses are a common mode of transportation. With the network of highways and other roads you can reach every place in Vietnam. Some roads are in better condition than others, overall I have not experienced terrible roads on the most travelled areas. The situation is different when heading to the rural areas, especially in the far north. 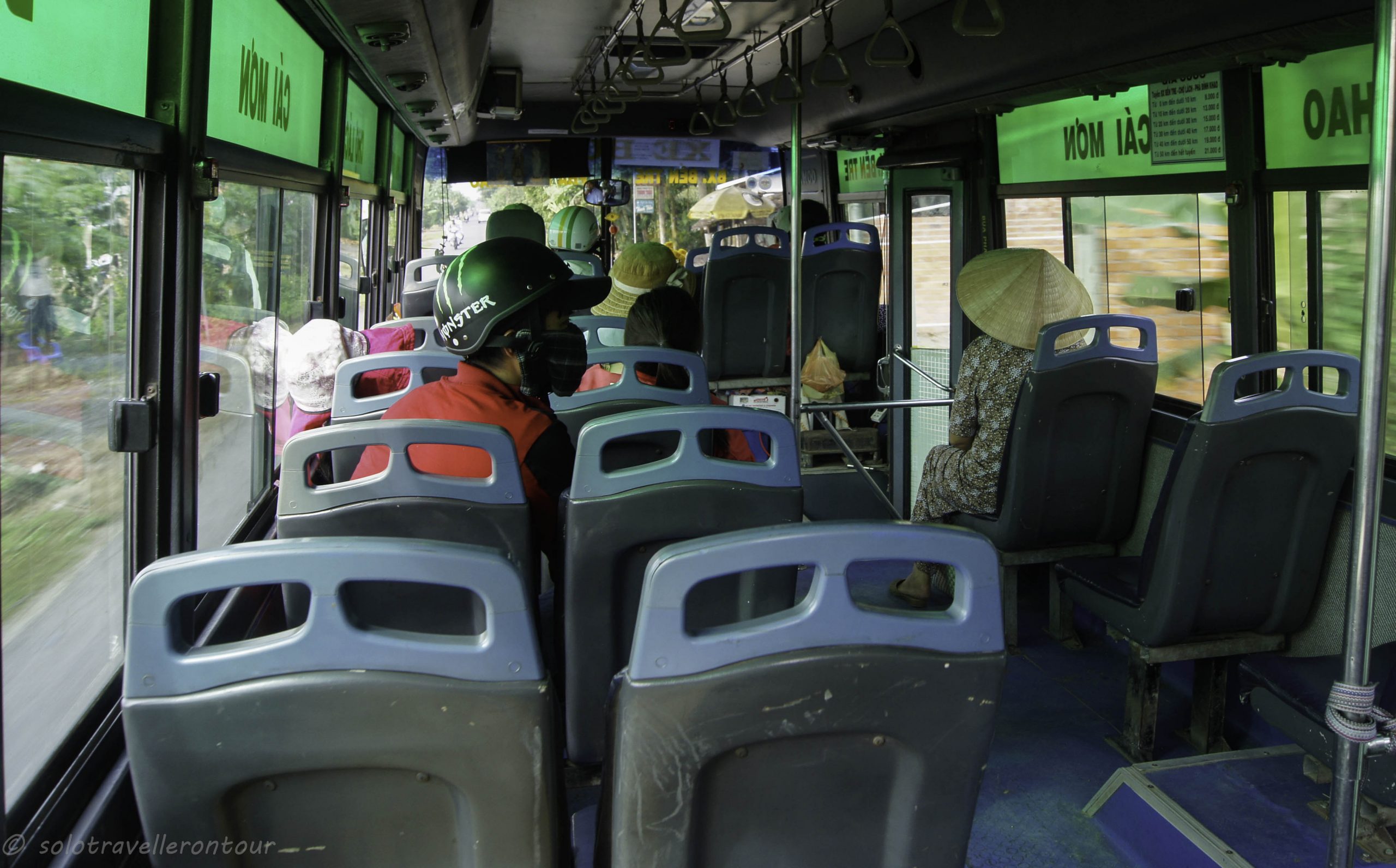 You can find different kind of buses: local ones in thecities, minibuses, larger buses for the popular routes and the sleeper buses, where instead of seats you find bunks in the bus. They are not the most comfortable ones for people over 1.75m. 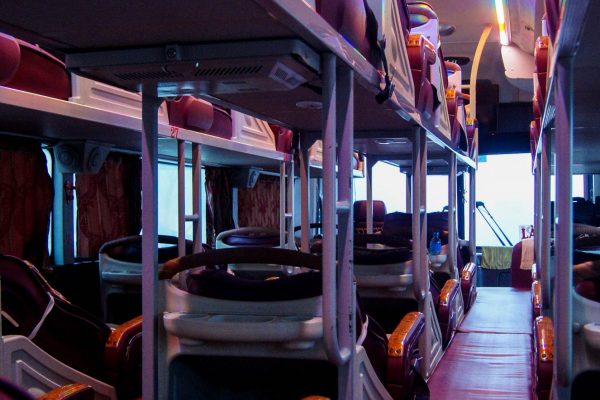 Seat arrangement in a nightbus 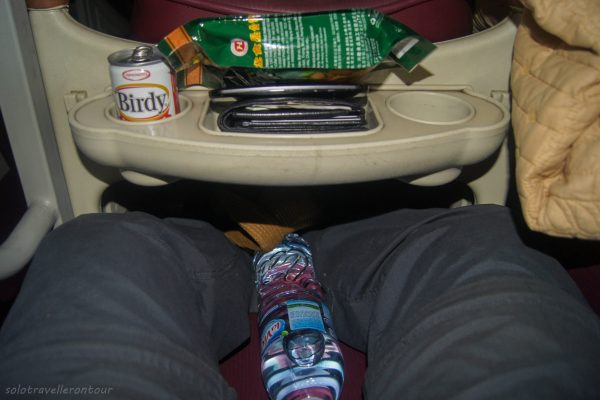 It was a little bit more comfortable than it looks

The biggest issue for bus journeys is the safety aspect. The number of fatalities on the road in Vietnam is staggering. Most of them involve scooters, but there a regular reports about head on collision of buses, where not everyone walks out alive. Seeing the Vietnamese driving style no one can really be surprised about it. During the four hour journey between

Hanoi and Halong Bay I saw some reckless overtaking manoeuvres of the bus driver, where other cars had to break or driving off the road to evade the bus and prevent a collision. The  main risk areas are the busy highways  between Hanoi and HCMC. The less travelled roads in the north, the central highlands or the Mekong Delta are more comfortable.

But the general advise of regular visitors or expat in Vietnam is to use trains or planes and avoid buses where possible. However, if you prefer taking the bus, or there are no alternatives when heading to the Mekong Delta or to the far north try to use one of the reputable bus companies like the Original Sinh Cafe or Futa. I also travelled twice on Kumho Sance and it was good.

However, are not tempted to use the night buses, as they are seen by expats as death traps. Bus drivers on drugs to keep awake during the night is apparently not uncommon, and scooters or other cars driving without lights or animals suddenly appearing on the face can cause terrible accident. Again, some of the more remote areas might be safer due to lack of traffic, but it is still not safe.

Please be aware of fraudulent bus companies or aggressive drivers. For some scams check out this site.

Back to Vietnam Menu