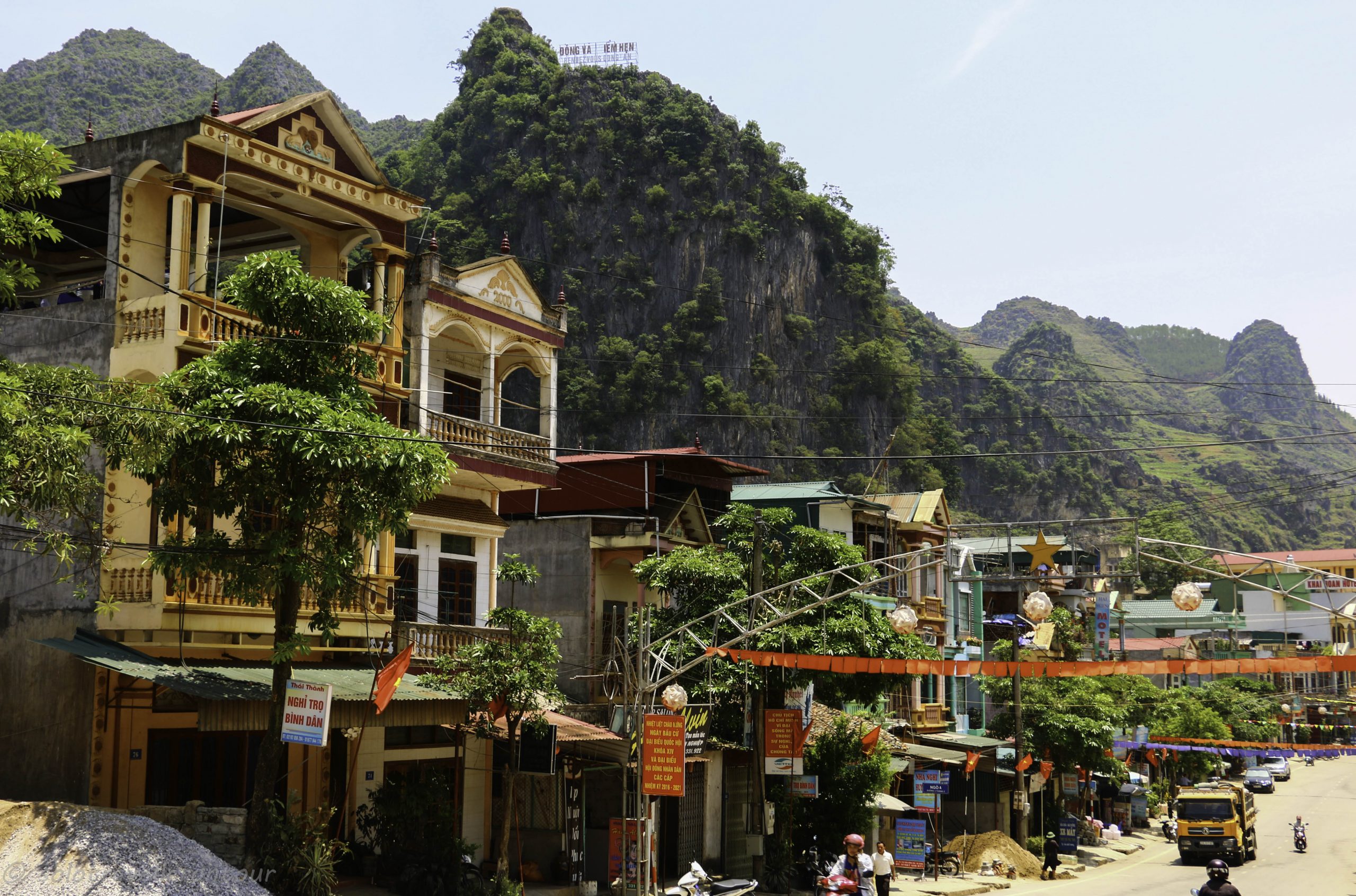 Dong Van is one of the most northern towns in Vietnam, only around 20km from the northern border to Vietnam. From Ha Giang it is around 150km via the QL4C road.

Like many other towns and villages it is located in a valley surrounded by hills, which gives the place an interesting feel, seeing the karst raising towards the sky behind the houses. It has probably the best tourist set up outside of Ha Giang, which plenty of accommodation for different budgets, food places, tourists agencies and even a nicely restored “Old Town” square with shops and cafes. It feels like a place where you could hang out for a day or two.

Due to its small size it is easy to get around, with most accommodation located along the QL4C that goes through Dong Van.

You will most likely see more tourists here than in Yen Minh, but like Yen Minh it has not the feel of a tourist town, with the locals seemingly very friendly

Overall, it is a nice place to stop, and if you need a little break from riding the motorbike it is a good place to do so. 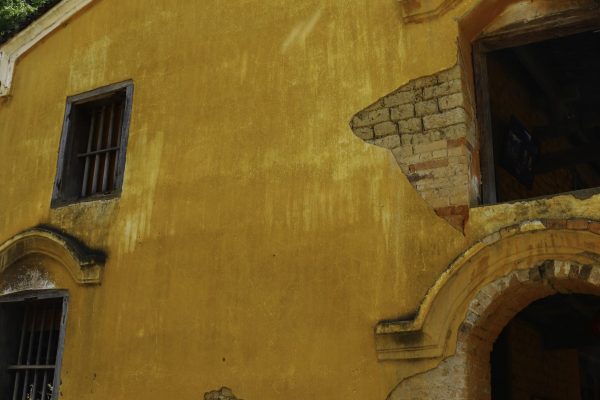 One of the beautiful houses in DOng Van 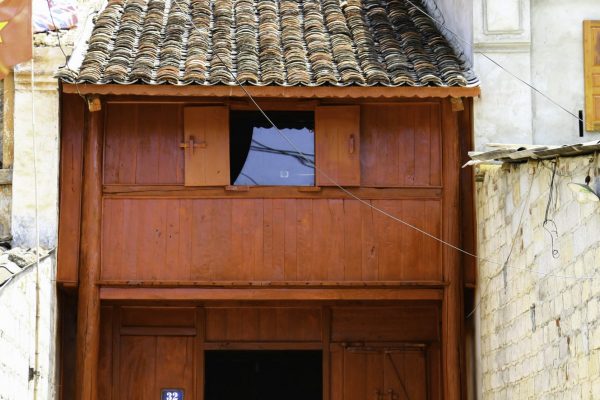 Colourful houses in the "Old Town"

Buses arrive here from Ha Giang Town and Yen Minh. Buses apparently go to Meo Vac as well – though not too often.

If you travel on a bike, the road from both Yen Minh (QL4C) and Lung Cu lead down into the valley where the town is located. Most guesthouses appear after the petrol station to your right. So it is worth while to ride down the road until you reach the town square on your left.

Coming from Meo Vac you enter Dong Van via the QL4C from the south. Again by following the road you will be soon in the centre of the town. You really cannot miss Dong Van when on the main road.

Dong Van has a nice mix of guesthouses on offer. There are some very basic accommodation without windows, some nice budget guesthouses and some nicer guesthouses for a higher prices. You will not struggle to get a room, even when arriving a little bit later.

Opposite the town square is a very nice looking guesthouse, where you can get rooms from 400.000 Dong. It looks nice from the outside. Coming from Yen Minh there are some very cheap places on the left prior to the guesthouses for rooms from 150.000 Dong (without windows though).

The Binh An Motel, which is on the right side prior to the square coming from Yen Minh, is a decent place to stay. It is an option for people travelling on a budget.

Like in most other towns you will have no problems finding a place to eat here. Along the main road there are several food places serving typical Vietnamese dishes. On a corner of the main road on the opposite side of the square is a food places offering a number of dishes from grilled meat, tofu, vegetables, soup and rice & noodles. You can see the food they offer at the entrance area. Inside you find the usual dining area with metal chairs and little tables where the food is served. The food is very nice, and it was 20.000 Dong for three people. I would recommend it for dinner. 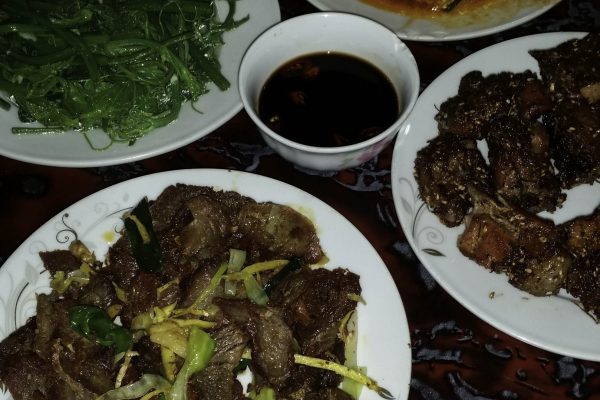 Dinner in Dong Van - it was good as it looks 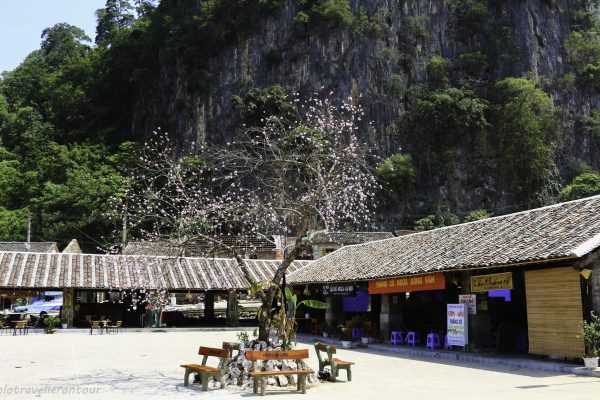 On the town square you can find a few little food places on one side, and next to it two places where you can have a late night drink – coffee, beer or cocktails. This is a nice place to sit down for a late night drink, or for having a coffee in the morning. With the square lit up with lanterns at night, and the view offered during the day it is maybe one of the best places for a drink.

For breakfast there are a few food carts opposite the market, one of them selling some great Banh Mi. Great place to buy one and then heading to the before mentioned cafe at the square.

Before the square on the left-hand side is a little bakery selling baguette. You can smell it from a distance, and it is difficult not to go there. Unfortunately they only sell bread and cakes, and not a Banh Mi with filling. But maybe worth to stop for a little cake.

When in Dong Van you should not miss the “Old Town”. It is the street that leads around the town square. You see some beautiful old buildings, the karst behind the buildings offering a nice contrast. It seems they ensure to restore the buildings and keep them then in a good state. It really is worthwhile to walk along the street. On the far side is a lovely old yellow building with a cafe indoors. Worth to walk inside as well. 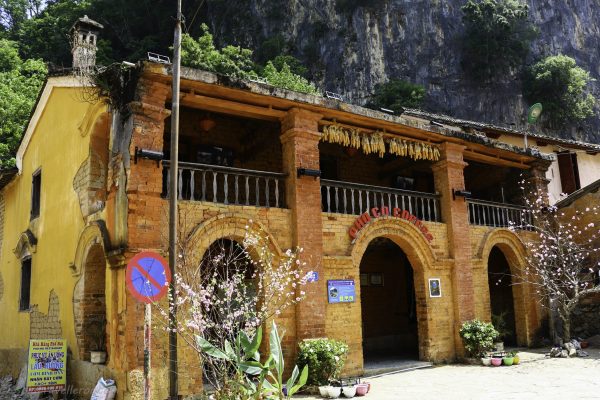 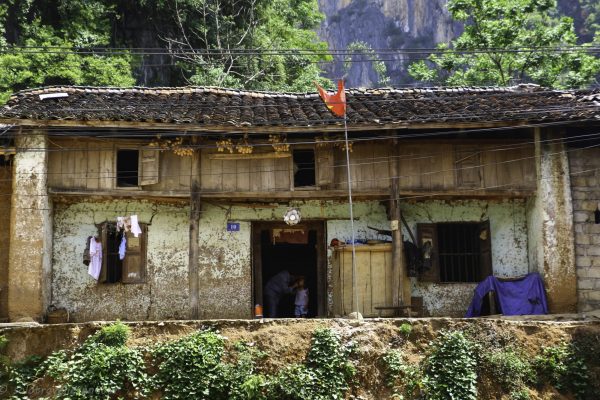 One of the older buildings of the "Old Town"

The square itself is nice as well, providing space for a few tourists shops selling silk scarves, traditional cloth of the minority villages and the usual tourist T-Shirts and other souvenirs. This is actually the best proof that Dong Van has the most tourist set up. 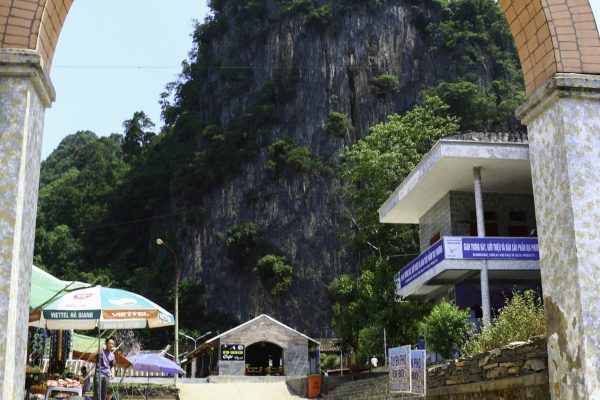 Entrance to the town square 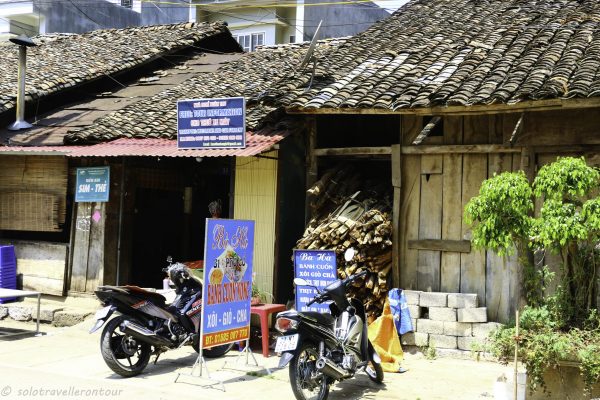 As far as I was told you will also find next to the market the most northern post office. So if you really want to send a postcard from Vietnam – this might be a nice place to do so.

Another good option is to explore some of the many small roads around Dong Van that could lead to a nice little trip. So having Dong Van as a base for further exploration might be a good idea. 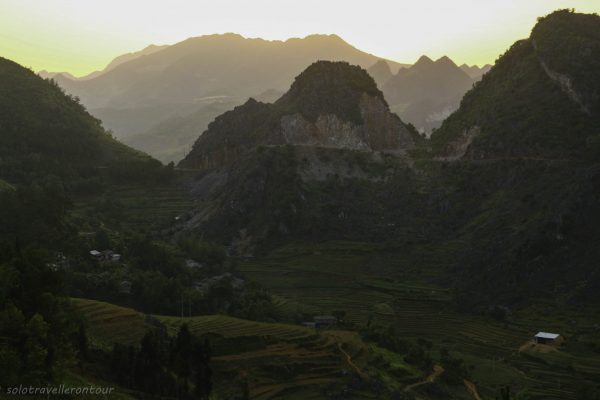 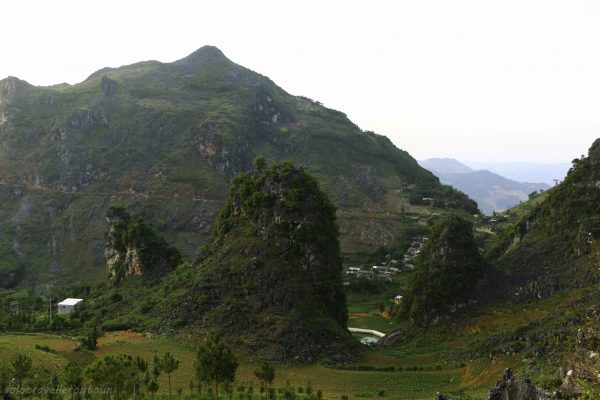 If you need some information, or want an organised walk, there is a travel agent opposite the souvenir shops.