One highlight of the Cham Islands are the various dive sites. For a dive trip contact one of the diving centres. I used Cham Divers, based in the Ancient Town of Hoi AN. They offer several packages for divers and non divers, including Padi courses, try dives, fun dives, snorkelling – either as a day package or a two day package that include overnight stay on Cham island (sleeping in a tent on the beach). Prices starts from $72

Their boats are spacious, with a large sun deck to relax, space on the ground deck to get some sun protection, and a good platform to get in and out of the water. Water, tea, cakes and bananas were provided free of charge throughout the day. They also had a few books on board to see what fish were spotted during the dive. Very handy for people new to diving. Lunch is not served on board, but on a beach on Cham Island, where the afternoon is spend to relax. 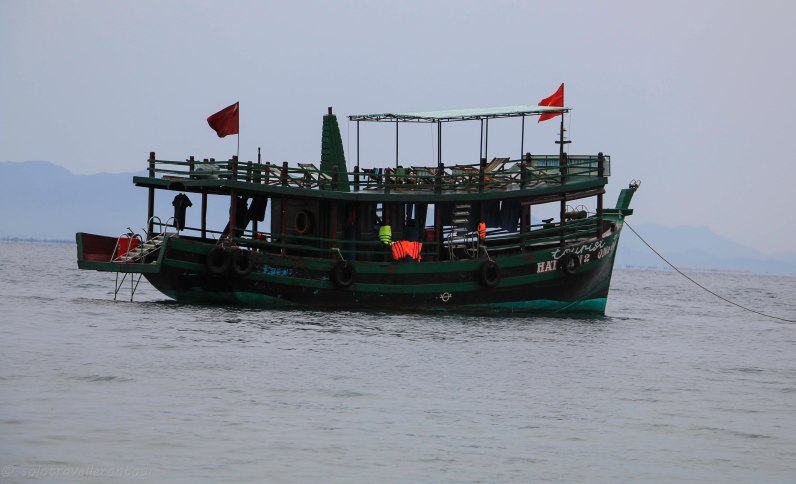 Their equipment, mainly Mares, looked good. Everything is provided to divers (included in the price) except of dive computers.

The dive guides are from all over the world, and the one I had (Ian) looked after us. His briefing was very clear with all required infromation, and he also allocated buddy teams. He checked the equipment under water as well, and spotted an issue with my jacket under water straight away. He also provided some good tips how to improve – something a beginner like me really appreciates.

Groups are put together based on qualification: non-divers, OWD and AOWD. On both days the qualified diver group were rather small, and the non-diver were putinto smaller groups. There was no large group with only one dive guides. Again, a good sign in regards of safety and comfort. You will dive until you have 50 bar left or after an hour. If your tank is at 50 bar much earlier than the other diver, the dive guide will help with the ascent (inclduing safety stop), and above water you will be picked up. THis way the other divers can still enjoy mor time underwater

Overall I was very happy with Cham Divers and had fantastic four dives. Would definitely recommend them.

We visited three different dive sites over the two days. But even at the one I visited twice we dived into different parts. For people doing a day trip they will see two different sites. Obviously the decision which sites to use depends on the weather.

Hon Tai South.
The water here was nice and warm – 29 degrees. After getting my damaged jacked replaced the whole group went down. Some slower than others. Apparently using the same amount of weight in salt water than in fresh water doesn’t work – I was too light with 6kg. But soon enough all five of us were down at 12m, and the dive started.

Visibility was great – around 15 metres, and I was able to enjoy the pure beauty of the underwater world. Fish were left right above and under us. We went down to 18 metres to follow the ground along coral reefs, rock formation. Floating around was great – even though I had to ensure not going up to easily.

My first ever Lion fish

Always time for a picture 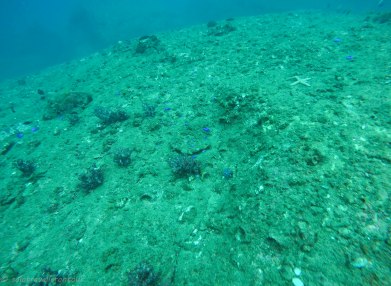 Ranh Man.
The second dive was great as well. There were less corals, but the rock formations on the ground were more interesting, at some point we passed some impressive canyons. Looking up to see how the blue colour of the water got lighter and seeing so many fish swimming above us, it hit me how strange and wonderful it was to be up to 16m down, enjoying the view in an area I actually didn’t belong to – it felt amazing and peaceful (considering the only sound I could hear was my breathing through the regulator). After 40 minutes we surfaced, and thankfully it was a shortish swim to the boat.

Some of the corals seen underwater 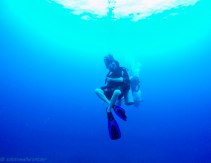 Getting ready for the ascent 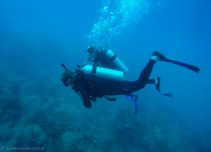 Difference between OWD and AOWD 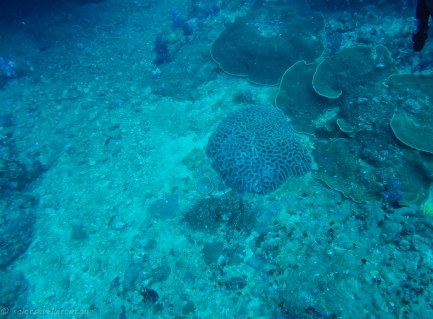 Hon Tai South again.
Due to the rainy weather visibility was worse than the day before, only up to 10m. Even though it was the same dive site Ian took the group a different direction to see an area not seen the day before. At one point Ian made it quite clear to stop immediately, and took us a wider way around a rock. I was distracted by a colourful fish that I didn’t see the trigger fish which was the reason for our detour. If protecting their nest they can be aggressive towards divers. Otherwise the corals and plenty of fish ensures it was an enjoyable dive.

More colourful fish seen- some of them bit me 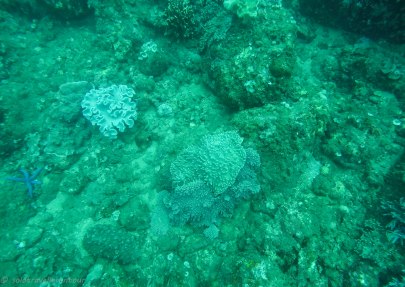 Sien Vien.
The underwater world here was once again complety different, and we spotted another lion fish. The main attraction once agaiin was were some canyons, and I enjoyed every single minute of the 46 minutes under water down to 17,6m.

Keeping an eye on the floor 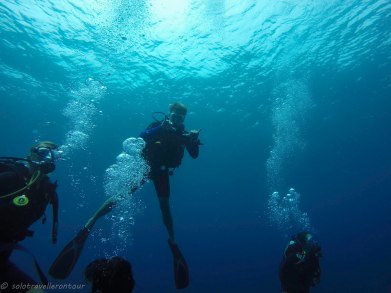 Going up for the last time

I really enjoyed my dives here, but it is clear that the corals are not as colourful as in Egypt – but they are still beautiful. In addition of many smaller fishes we also spotted a few lion fish and a trigger fish. But the area is not the home for larger fish – which made the dives very enjoyable. It is definitely a nice area for new divers, and for experienced diver I think it offers a nice activity if you are templed or cultured out. Would I dive there again if I am back in Hoi An? I certainly would.