Cao Bang is the capital of the Cao Bang province in the far north-east of Vietnam. It is around 240km away from Hanoi, located in a mountainous area with some stunning scenery in the surrounding area. It is by far the biggest town in the province. Especially along the waterfront of the river that passes through the middle of town it has some charm. But overall, the attraction of Cao Bang is being a great base to explore the province.

The area on the west of the river, opposite of the bus station, is what you could call the tourist area. However, the hotels are not aiming for foreign tourists, but for the large numbers of Vietnamese tourists that visit this area. The place is still not on the radar for most foreign tourists and are mainly visited by backpackers who are exploring the far north on the back of the bike. Still, any tourist will find plenty of choices for accommodation and places to eat. However, it was very difficult to rent a motorbike here. So, prepare to look around for a while if you want to explore the area by motorbike.

However, the lack of western tourists has its advantage as locals are happy to approach you to practise their English. And do not be surprised if you are invited for a beer or some rice or corn wine. This very welcoming approach adds to the rather nice vibe of this town.

The surrounding area is mainly defined by limestone karst, hills, rice fields, vegetable fields and numerous minority villages. The highlights of the province are surely the beautiful Ban Gioc waterfall, the Động Ngườm Ngao cave and the Pak Bo cave. Cao Bang is the perfect place to visit these places and to enjoy the stunning scenery. 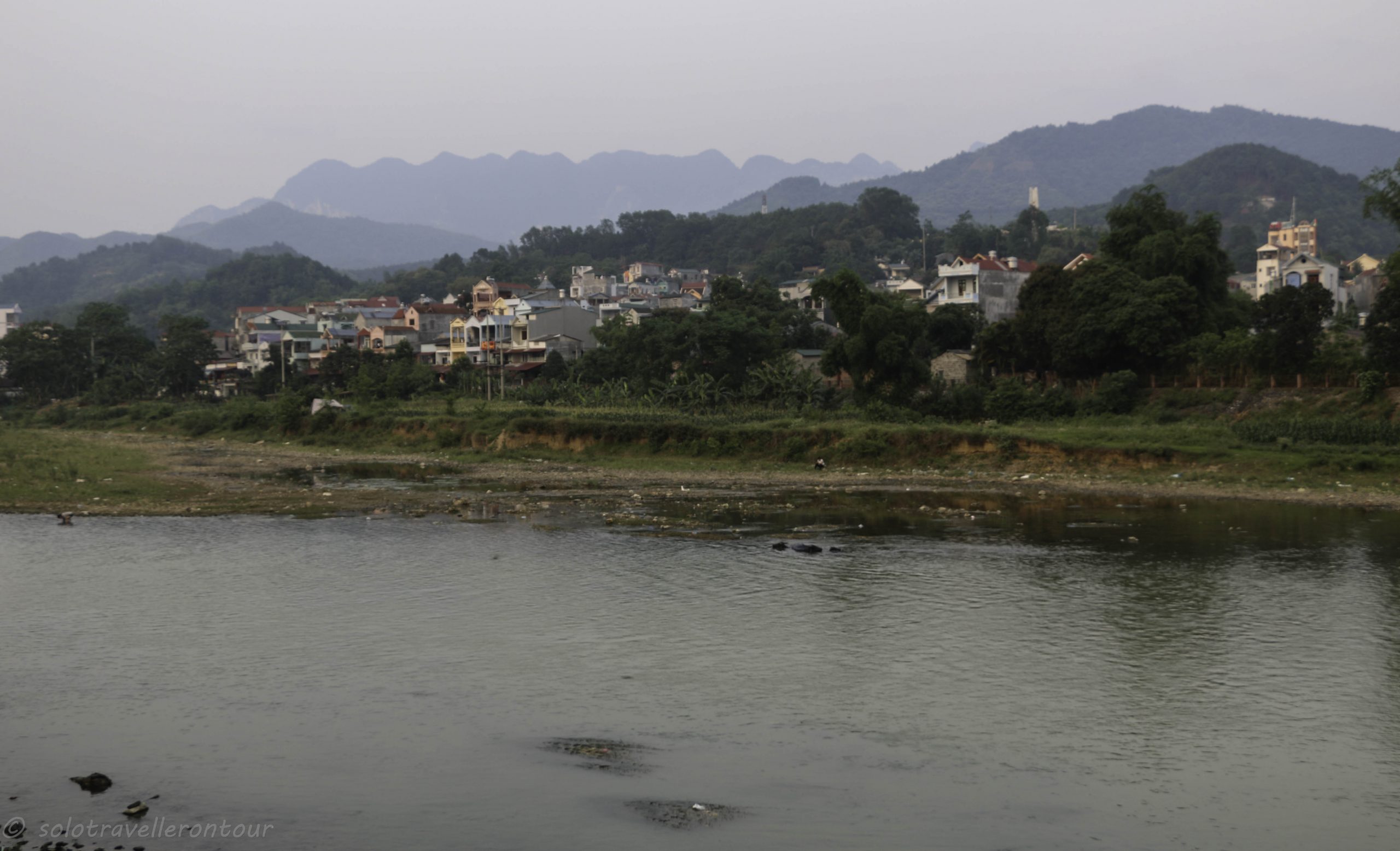 The main way to get to and from Cao Bang is by bus. The bus station is located near the main bridge Cao Bang on the east side of the river.

There are regular buses connecting Hanoi and Cao Bang. Minibuses leave every hour. Larger buses departure every other hour as well. Depending on the company the journey takes between 6 and 8 hours. I used two different companies, and I would recommend Xe Hoa An. They leave Hanoi at 10:30, and Cao Bang at 7:30am. They didn’t do any big detours, and the driver was not bad. For my return journey I took the minibus at 11:30 from Cao Bang, and we only left at noon. This bus seems to stop everywhere. The journey took 2 hours longer.

Form the station buses arrive and depart for all places in the surrounding area, including Quang Uyen, Ban Gioc and Bao Lac. I was told there is no direct bus to Ha Giang, you would need to change buses in Bao Lac. There are also buses leaving for Thai Nguyen.

There is apparently also a bus going between Cao bang and Ba Be Lake. As an alternative take the bus to Hanoi and change buses halfway through (the other bus will stop and wait).

Due to the popularity with Vietnamese tourists Cao Bang has a wide range of accommodation on offer. Most hotels and guesthouses are located west of the bus station on the other side of the river. The most luxurious hotel seems to be Khách Sạn Bằng Giang hotel next to the bridge. During the day it seems to be a conference centre as well. You might be able to hire a bike there, depending on who the receptionist is.

I stayed at the Minh Hoang hotel along the river, and the Than Loan Hotel near the market. While I enjoyed the latter, when arriving in Cao Bang it might be worthwhile to check out some of the guesthouses near the bridge. You are close to everything and do not need to find your way through Cao Bang when arriving on a bike.

Considering that most visitors are Vietnamese Cao bang has not a lot of larger restaurants. Instead, you find here little food places and several food stalls. I had dinner at the food stall next to the roundabout coming from the bridge. They have a few chairs there and an interesting looking kitchen. The pho bo was very good, and the other dishes served (including stir fry) looked very good as well. A nice place for dinner.

Another good pho place is opposite the bus station, the first one after the roundabout. They mainly serve pho, and there is a reason why. It is just delicious. There are more stalls next to this one.

There are other little food places, and there is apparently one on Vuon Cam that is a popular place for Western tourists, but I never visited it. Along the river on the western side of the river you will also find several food places where you can enjoy dinner or just one or two beers.

On the main road running parallel of the waterfront, you will find plenty of cafes for a nice cold drink. One that is very popular with locals is the located next to Khách Sạn Bằng Giang hotel. Here you get some nice smoothies as well as a version of coffee with coconut milk.

What to do in Cao Bang

I haven’t really explored Cao Bang but riding along the street I saw some nice section, so a stroll through the town seems a nice idea. In the evening it is worthwhile to walk along the river to enjoy the view and atmosphere with locals and tourists sitting along shops – eating and drinking.

However, the main attractions are outside of Cao Bang. The Ban Gioc waterfall is a must-see attraction in that region, being an impressive waterfall representing the border between Vietnam and China. Nearby is the Động Ngườm Ngao cave and should be incorporated into a visit to the falls. 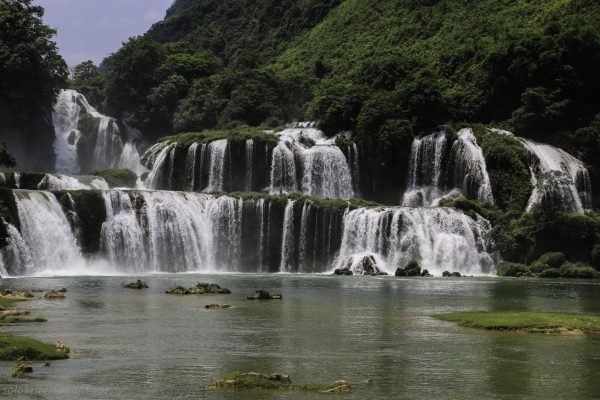 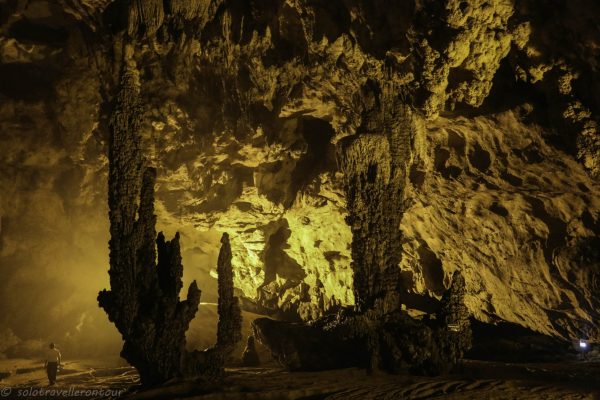 The most impressive chamber of Động Ngườm Ngao cave 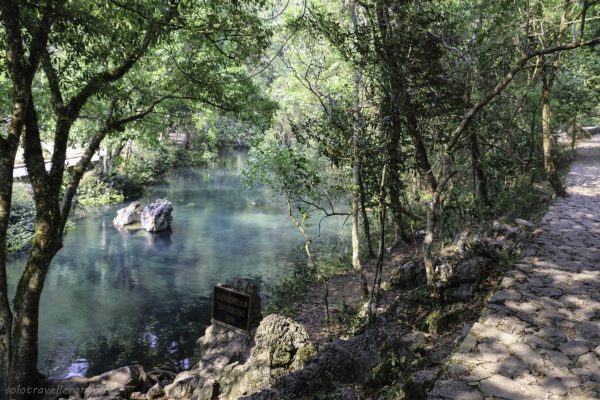 North of Cao Bang is a very important site for the Vietnamese, the Pak Bo cave. Representing the start of the Ho Chi Minh highway this is another interesting place to visit.

But it would be a shame if you’re in the province and not exploring this area. It is a beautiful, remote area with stunning scenery and friendly locals, lacking mass tourism. This province has some of the most beautiful places Vietnam has to offer. So you should really consider doing the Cao Bang Loop when visiting Cao Bang. 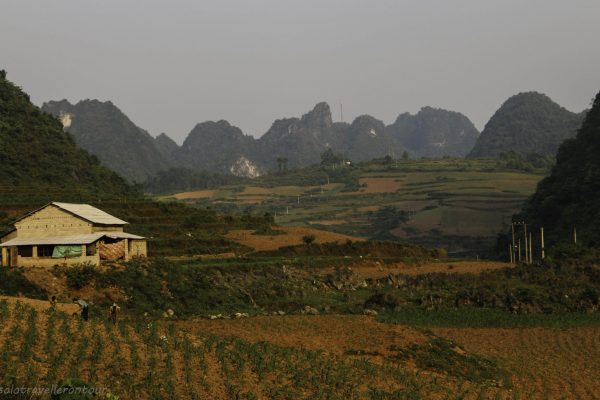 Sun set in the middle of nowhere 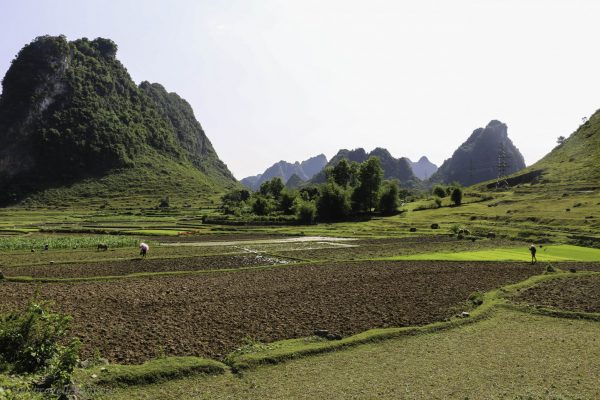 It is hard to beat this scenery 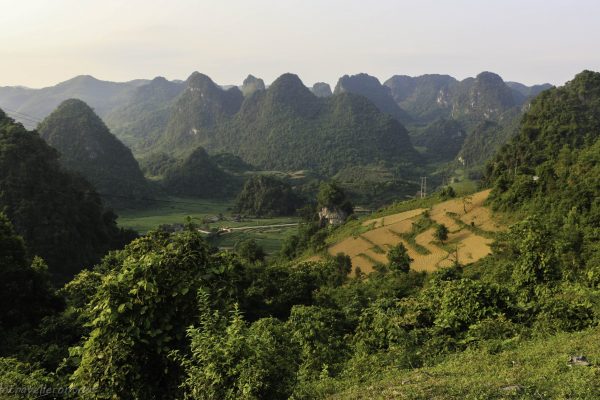 View of the valley - with the right road below me