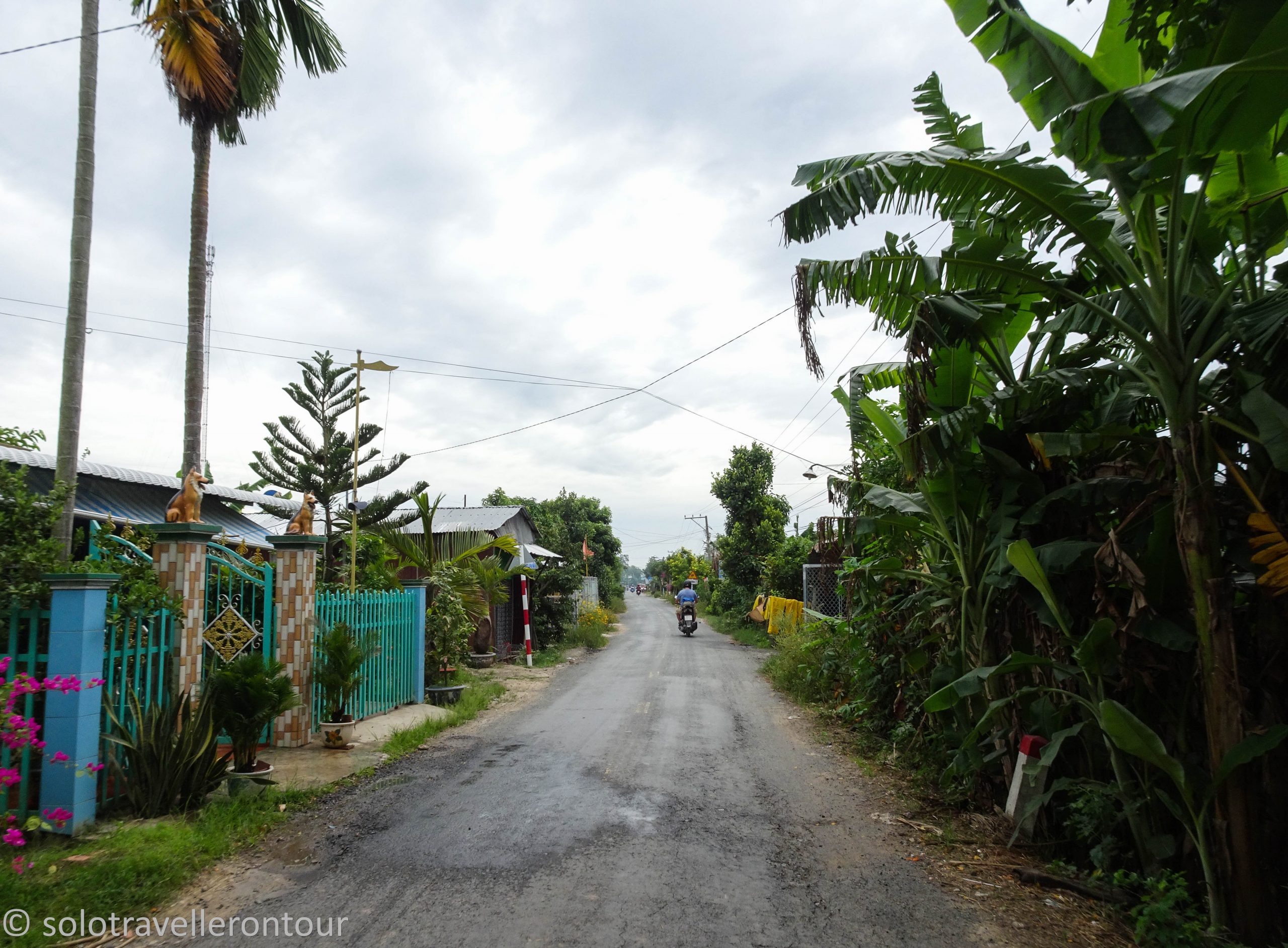 This was it – the last day of this so far amazing motorbike trip through the Mekong Delta. I twas time to head back to Saigon. So a last time getting up and packing the bag.

Thankfully this time there was no need to find a breakfast place. Instead we headed to the first floor were a breakfast buffet was available. They offered a selection of Vietnamese / Asian food like pho, ban cuon, dim sums as well as baguette, jam etc. It was a good selection and my sister and I managed to fill our stomach.

It was also interesting to see the amount of Vietnamese guests in the breakfast room and the amount of buses outside. It was Sunday morning, so it seems many Vietnamese came to Chau Doc to visit the holy mountains and nearby temples. Unfortunately we had no time to visit either. Instead we cleared the room, and after looking for my parking ticket and key I was the last on the bike. A bit later than planned we were on our way towards Saigon.

We headed back to the river front as we had to cross it. For some naive reasons I thought there was a bridge, but no, we had to take another ferry to get to the other sides. I stopped counting the number of ferries we took. I enjoyed it I must admit, as I can relax a bit and take in the view and watch the locals. Great way to travel. 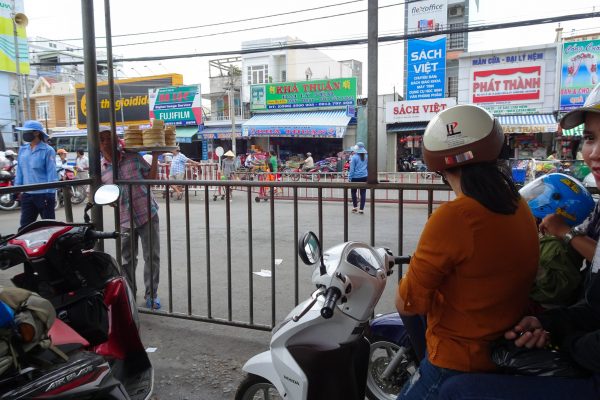 Waiting for the ferry - including food delivery 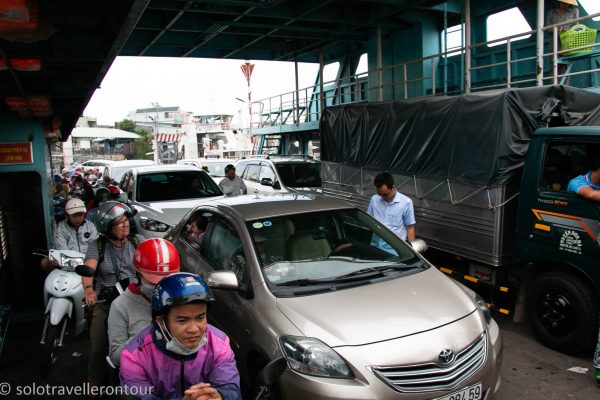 The ferry was rather busy 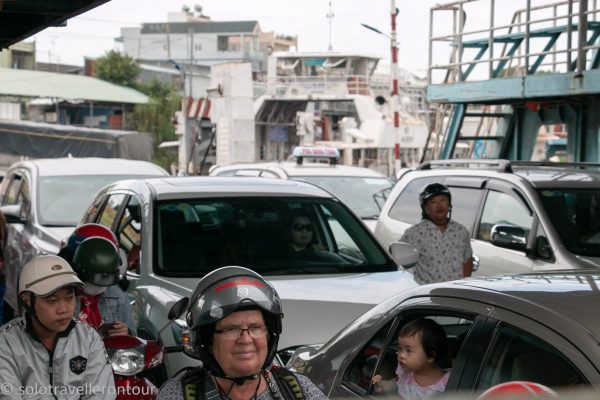 It seems even we were certainly interesting for some locals

On the other side of the river we followed the DT951 along the river, which was actually quite pleasant as we passed quite a few villages where we could watch more of the local life. it was rather pleasant. After a short while it was time to say bye to the river and to follow a smaller road leading us to the next larger road. This stretch was once again very nice. Passing rice fields, villages and lots of green. Obviously, being a side road, potholes and some rather bad looking stretches were part of the fun. 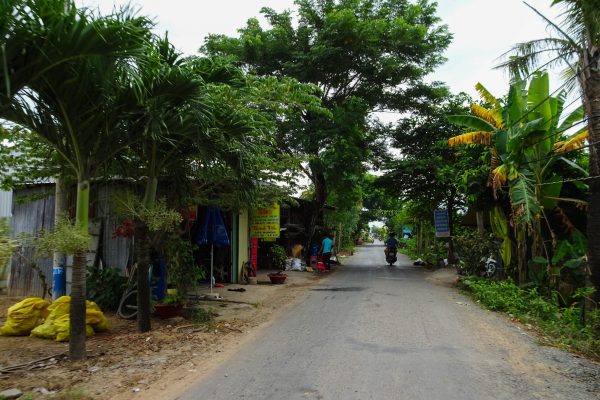 The road in this area was a pleasure to ride 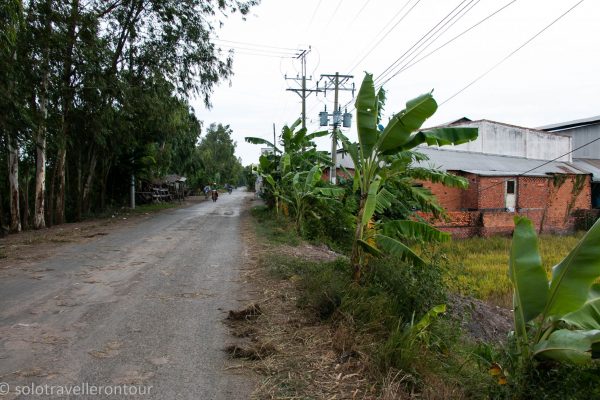 The condition of the roads did not get better 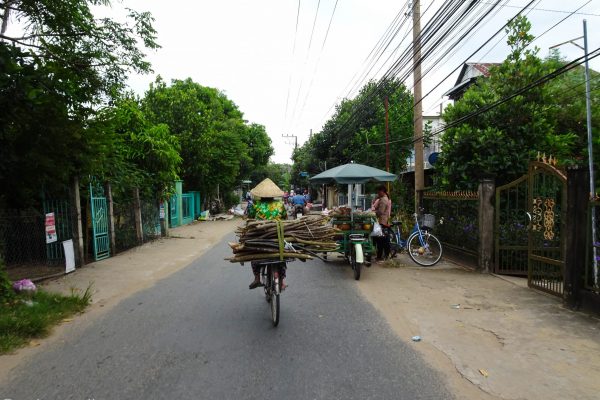 The village on the other side of the river 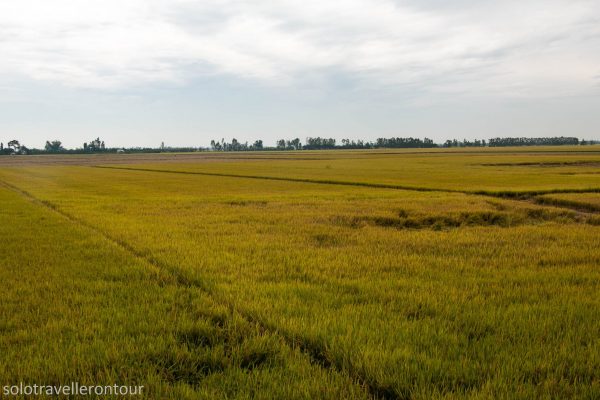 More rice fields to see - I was a happy man

Soon we were back on a main road (DT954) that followed one of the many rivers in this area. I know we had to cross the river via a ferry, but I was a bit tempted using one of the rather small ferries you could spot along the road. But my sister was probably right with 200km we should try to follow the direct route (we get back to that topic soon!!!), so we just enjoyed the ride, watching quite a few wedding parties that took place in tents that were erected on the road (covering half of it). Yes, life in rural Vietnam is certainly different than back in Germany.

We soon arrived at the next ferry crossing in Phu Tan. This was the last ferry crossing of the trip, so we both tried to enjoy the last crossing. This was a slightly longer one, as this was a larger arm of the Mekong river. Besides the usual boats there were also some static boats removing soil from the bottom of the river. While enjoying the fresh air and the view some of the kids on the ferry were a bit interested in the two foreigners next to them. Some shy smiles, then some laughter and when we arrived the waving started. These little things always make me happy when traveling in Vietnam. 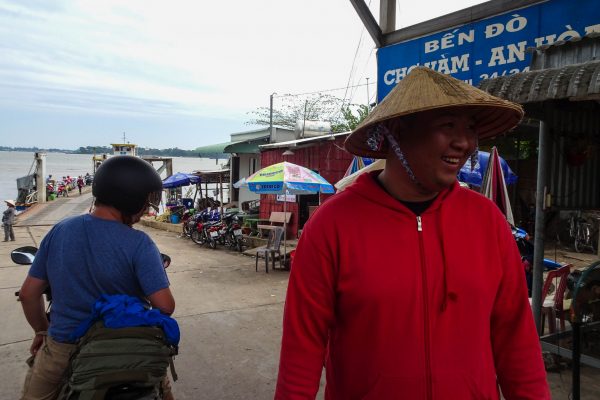 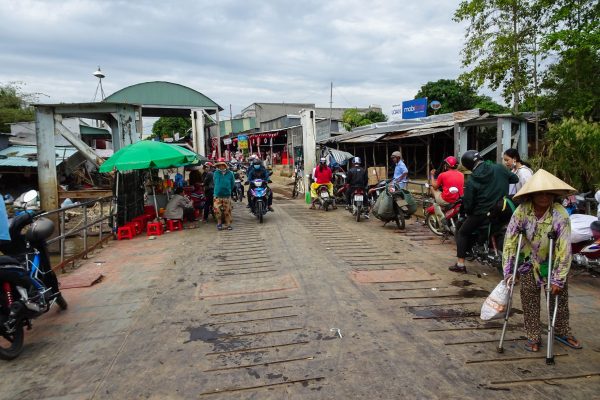 Our last ferry to use for this trip 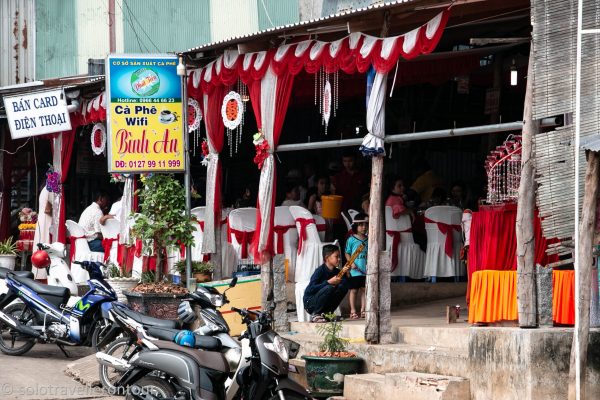 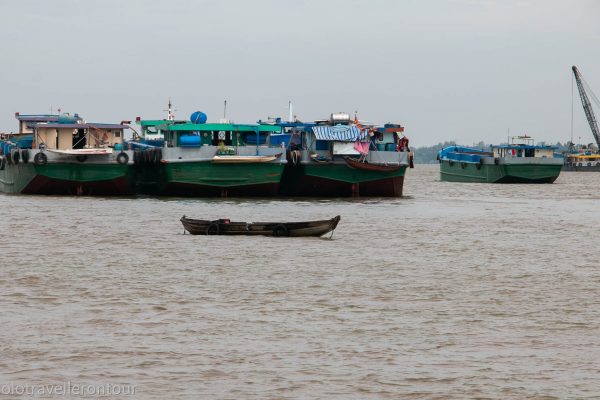 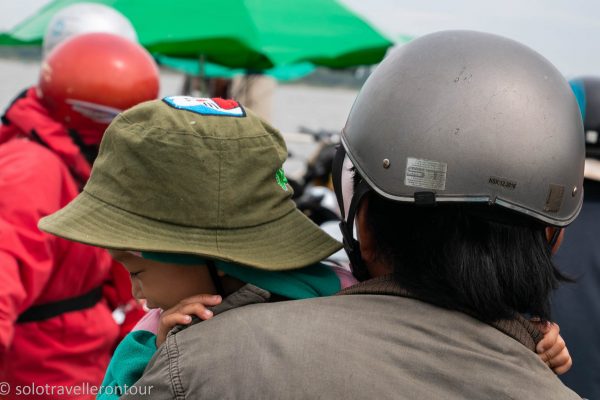 Playing hide and seek on a small ferry....

Now on the right side of the river we had two options – following the QL30 and then rather busy highway, or following the smaller DT844. The choice was very easy, and after a few km we turned off the QL30 and onto the side road. Without knowing this was a the last stretch of this trip where we rode on a smaller road with the sights we both enjoyed for the last few days. Rice fields, little villages, crossing little streams via small bridges, some small towns, some lakes. It really was enjoyable. The temperature helped, as it got a bit cooler (and the sky darker), but it did not impact our mood.

For me this stretch was just a reminder why I like the area so much. One little highlight was a village were the street was above the ground floor, and so were the houses. The houses were connected to the road by little wooden or stone bridges, some houses were not connected at all. It was a bit unusual, probably even for this area. But it just showed that you can constantly experience something new. 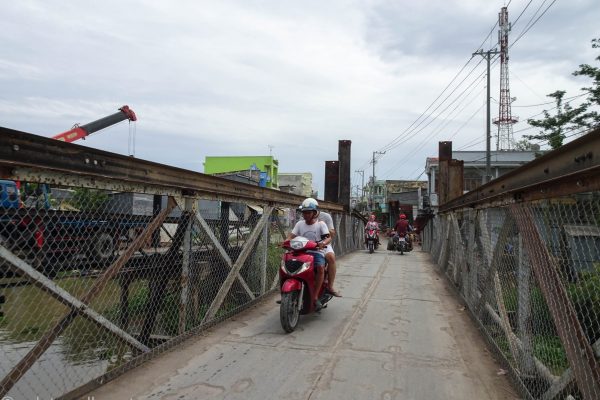 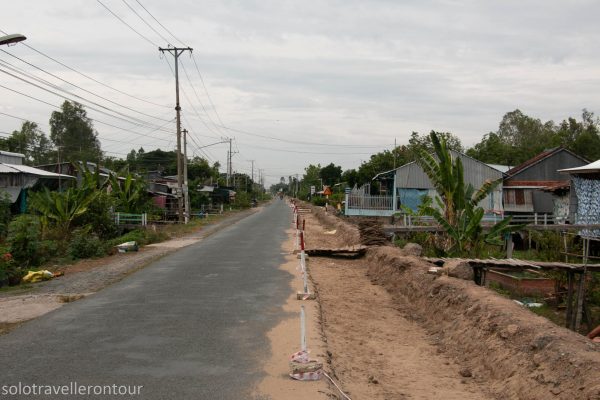 Connected to the main road 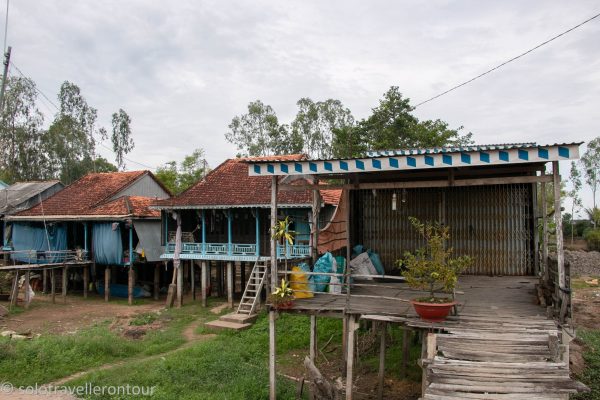 For the houses further back to the road it involved a lot of stair climbing... 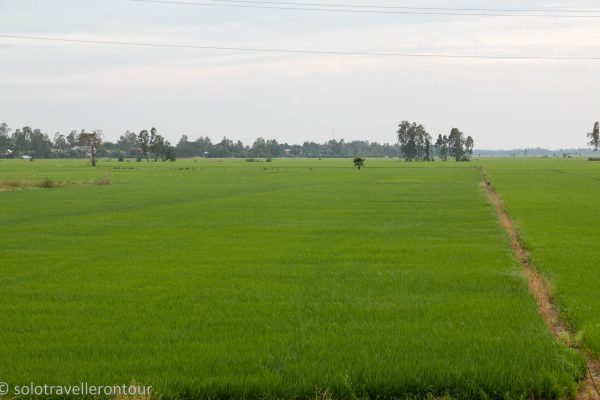 Unfortunately our good luck departed us at around 1pm, haven driven more than 50% of the distance – the cloud got darker and it started to rain. Ignoring the barking dogs we took advantage of the protection a closed restaurant offered and got our rain coat one for the very first time. Both of us hoped it was not required for too long. It turned out the rain got heavier instead, so my dear sister needed a mask to protect her face from the now heavier rain (I now really enjoyed the full visor of my helmet. At some time we decided it would be a good idea to stop for lunch and hope the rain stops.

We stopped at Nha Nghi Cafe at the end of DT844. It was a bit busy there as we were not the only people with the idea. But there was still plenty of space for us to get a seat and enjoying a hot Bun Bo Hue. Being a bit wet the soup was exactly what I needed. It was tasty and we took the chance to relax for a while. The place actually was a hotel as well, with rooms behind the cafe overlooking some rice fields, offering clean toilets in the room. Having taken advantage of the setting after 1 hour the rain did not stop, and it meant we had to continue the the ride in the rain. Protecting our gear as much as possible it was time to leave the comfortable and dry place. Surely, the weather would become better. 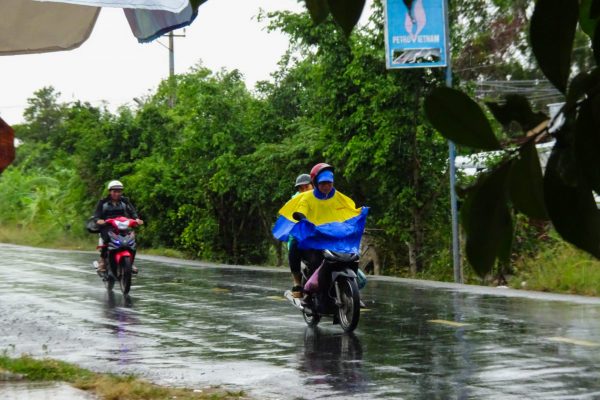 Seemingly the weather got worse 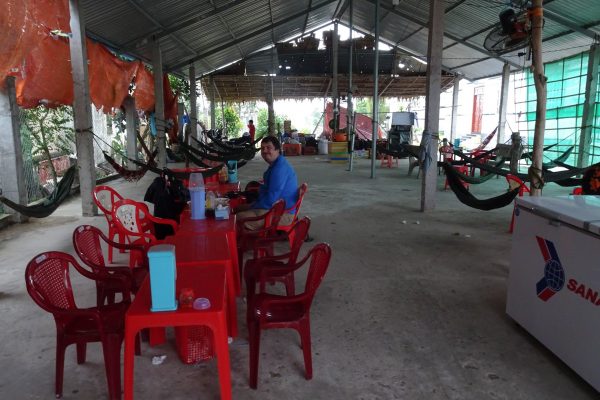 Finding shelter from the rain 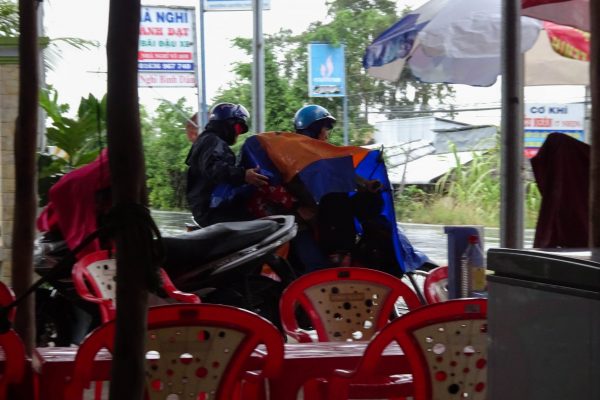 Watching the locals getting prepared - I was not eager to follow their lead....

Well, it did not. A storm had moved over HCMC and the surrounding area, and for the remaining 90km we realised that as well. Shortly after the cafe we followed the QL62, which meant slightly better road but also more traffic. And more rain. It was pouring down now. It seems something went wrong with my raincoat and I gathered quite a bit of water. I was soaking. My dear sister did not had the same issue – but still got wet. Focusing on the road I was unable to enjoy anything during the stretch – and I was too cold and too wet to care. Stopping at a petrol station was a short relief to get a brief break, but the relief was gone 2 minutes after the ride continued. Thankfully at this time we just had to follow one road towards HCMC. Though after a while my map told me to turn off the main road. So we did. At the next traffic light I wanted to check the map again, but I was too wet and assumed we just follow that road. Suddenly we arrived at a larger freeway and we continued here. Even the sight of a lorry using the bike lane to avoid paying for the toll (the attendances rushing out of the booth to see the lorry speeding away) did not stop us. Though something in my mind that we are not heading to HCMC. The road was not busy enough. My hands freezing cold and wet it was a rather bigger challenge to check my phone – and to my horror I realised that we should have turned left at the traffic light. Great – we rode 15 minutes into the wrong direction. So turning back and off we we were. This time we took the correct turn. Thankfully now the rain got a bit less. And for more good news I spotted a sign indicating to turn left to HCMC. 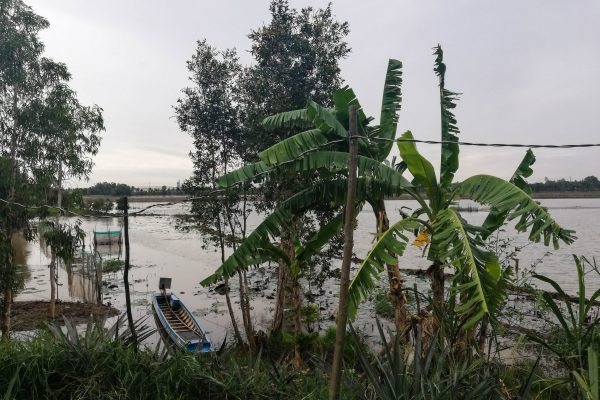 The last picture from the road before the rain started 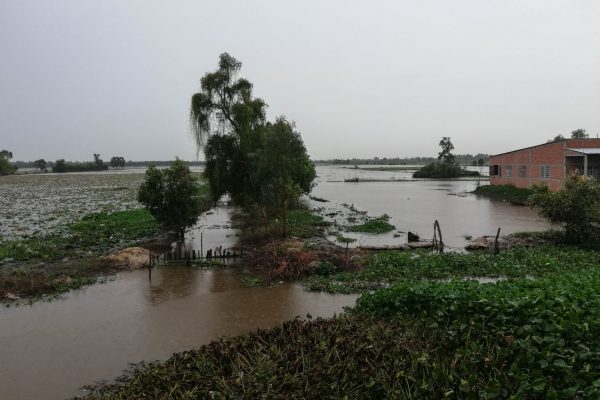 If you thought this would be now the easy part to get home – it was not. Apparently it had rained a lot here. So roads were flooded. So we both had to check where to ride, observing the bikes in front of us. So my tyres disappeared underwater a few times. At some time I thought I was clever and followed a bike whose rider was certainly sure how to cover tat stretch. Unfortunately he decided then to ride on the pavement which I decided not to do – and had to encounter some deeper holes again.

It was not fun. And to make things worse – the rain got heavier again and it got dark. At least we were now in the outer area of Saigon. Surely now we were ok. Once again I was wrong. At a traffic light we had to stop (I was so soaked I didn’t even care that my feet halfway to the knee was under water) and as sson the traffic light turned green i ahd to focus on the road. My bike was partly half way under water, and falling down now would be a bad idea. Covering that stretch I stopped to wait for my sister – the only problem was she was not behind me. I waited for a few minutes – still no sign. We previously agreed if we got separated I should return to the last spot I saw here. But this would have meant going back through the totally flooded street. Thankfully somehow I managed to reach her on the phone, and after giving one simple instruction she finally arrived. It seems she followed another bike with a similar raincoat and turned right – into an even more flooded street that even had a strong current. Glad that I did not have to experience that, we continued our journey.

Unfortunately HCMC is rather large, and as it was ark and wet I was not 100% sure where we were exactly – until I spotted a familiar place. Unfortunately I did then a wrong turn, causing further delay. But finally I saw the canal and somehow ended up at home. At 18:30!!!! I am not sure I have ever been so happy to arrive home. Soaking wet, freezing, cold. But we made it somehow in one piece. Not the end I was hoping for this trip.

But it did not ruin this great trip. I had a fantastic time exploring the beautiful Mekong Delta and to make it even better I was able to do so with my old(ish) sister, which was a first, but certainly not a last. Experiencing some stunning scenery, meeting lovely locals and seeing some less usual sights. We shared laughter but also seen the terrible past in some regions because of a murderous regime in Cambodia. It is impossible to name the best part of this trip – I surely will not forget the whole trip. It was a great reminder how wonderful the region is – and I still have to visit more areas in the Mekong Delta. This was certainly not my last visit. 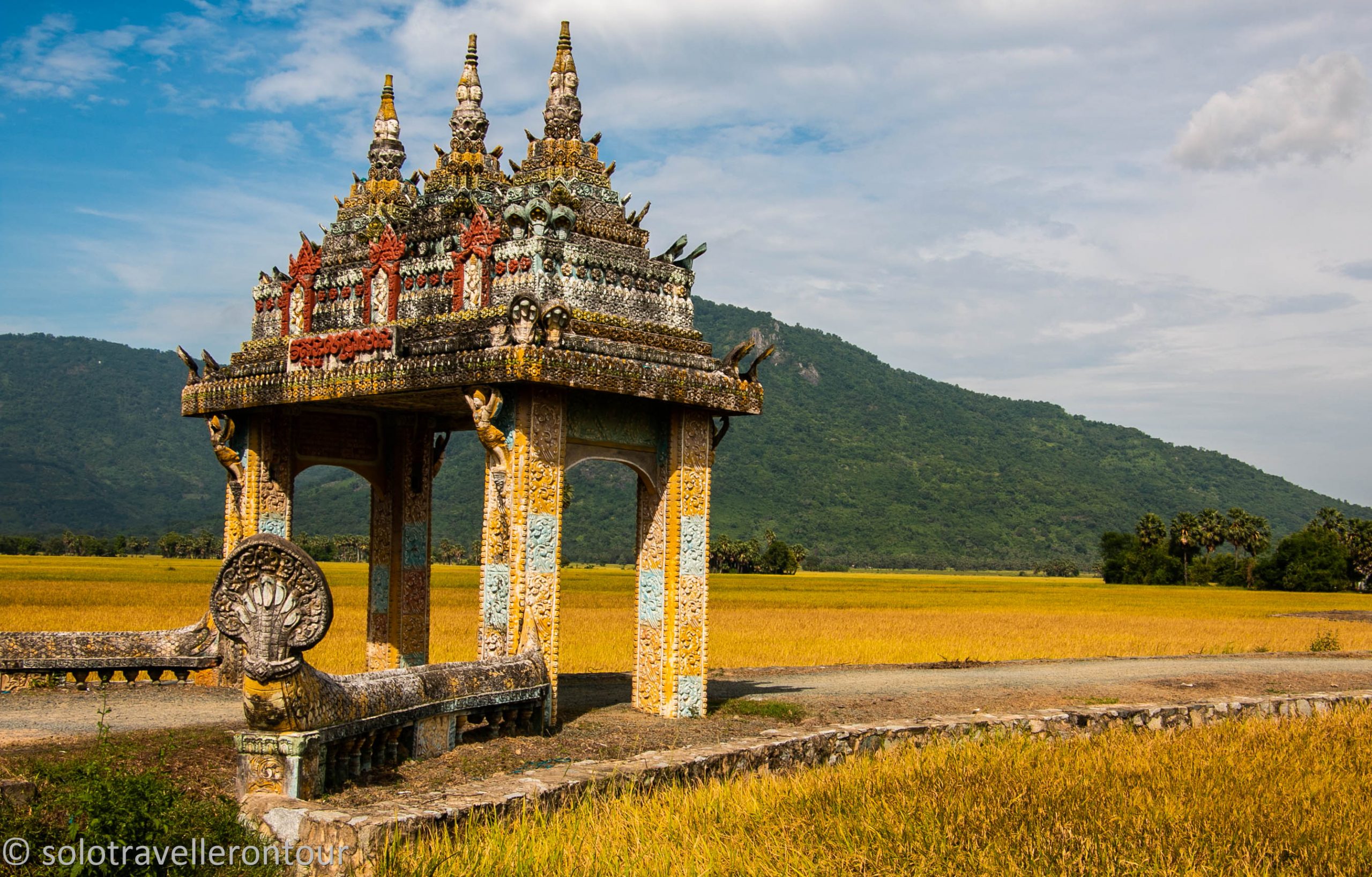 Mekong Adventure V – A day of beauty and sadness 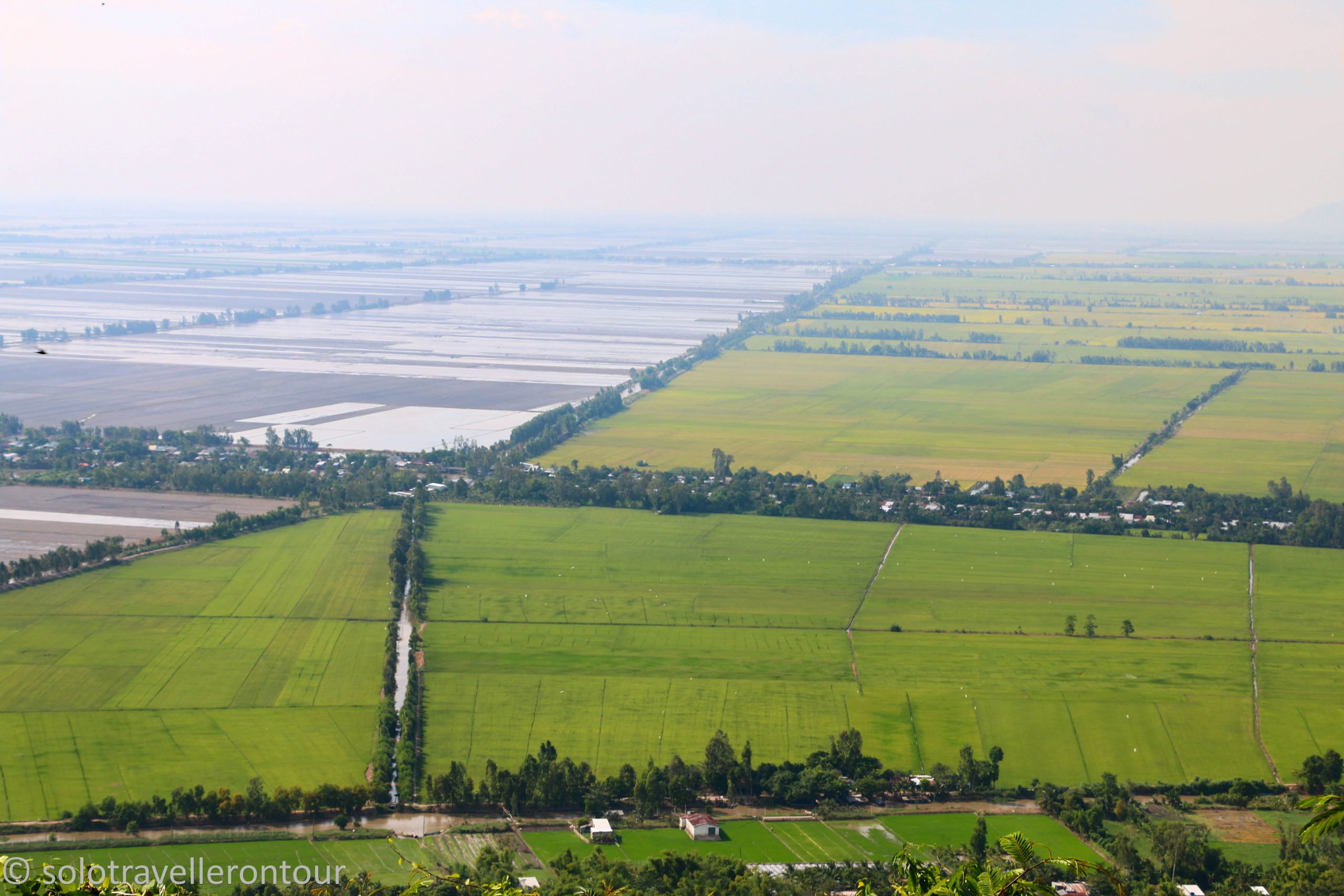 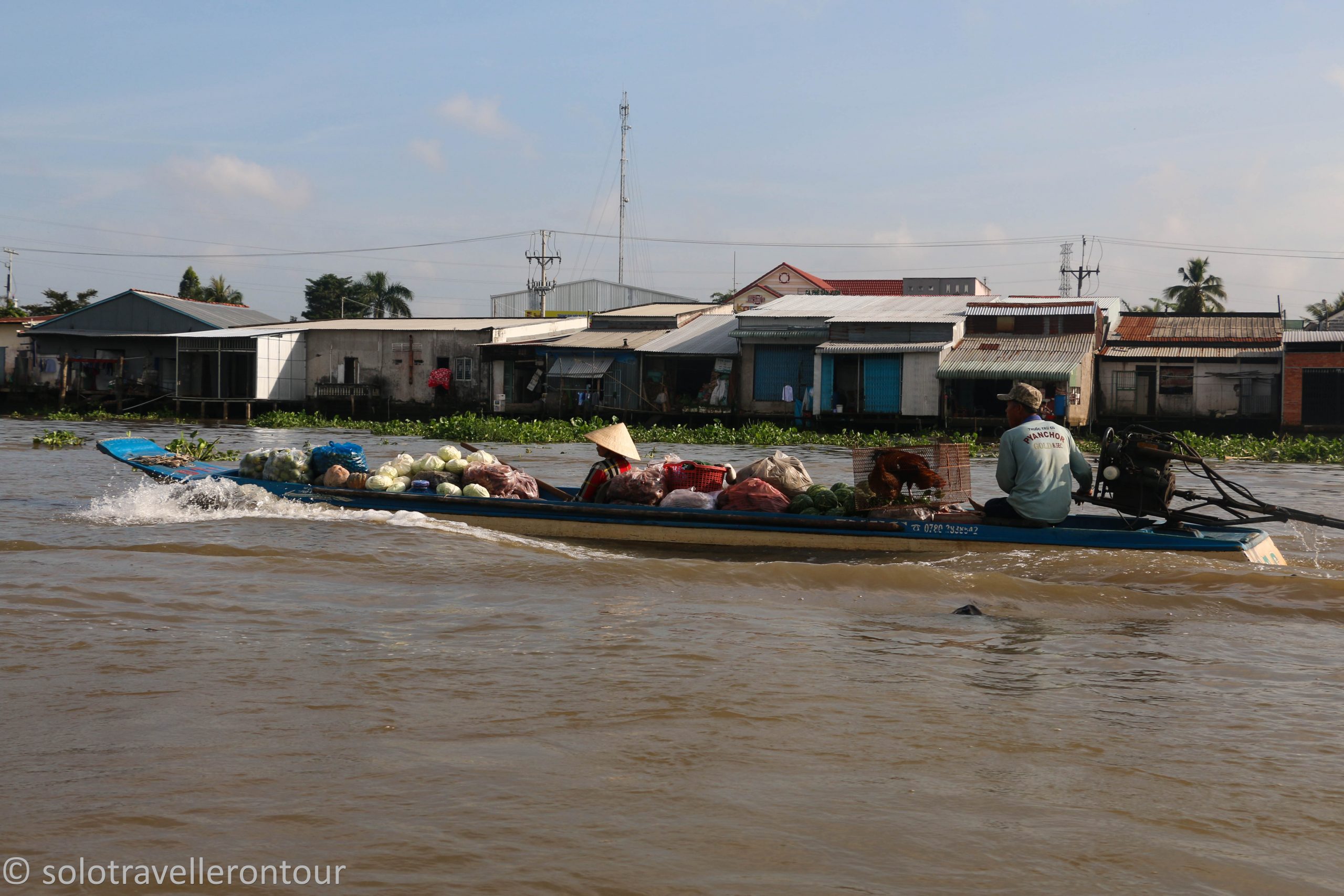