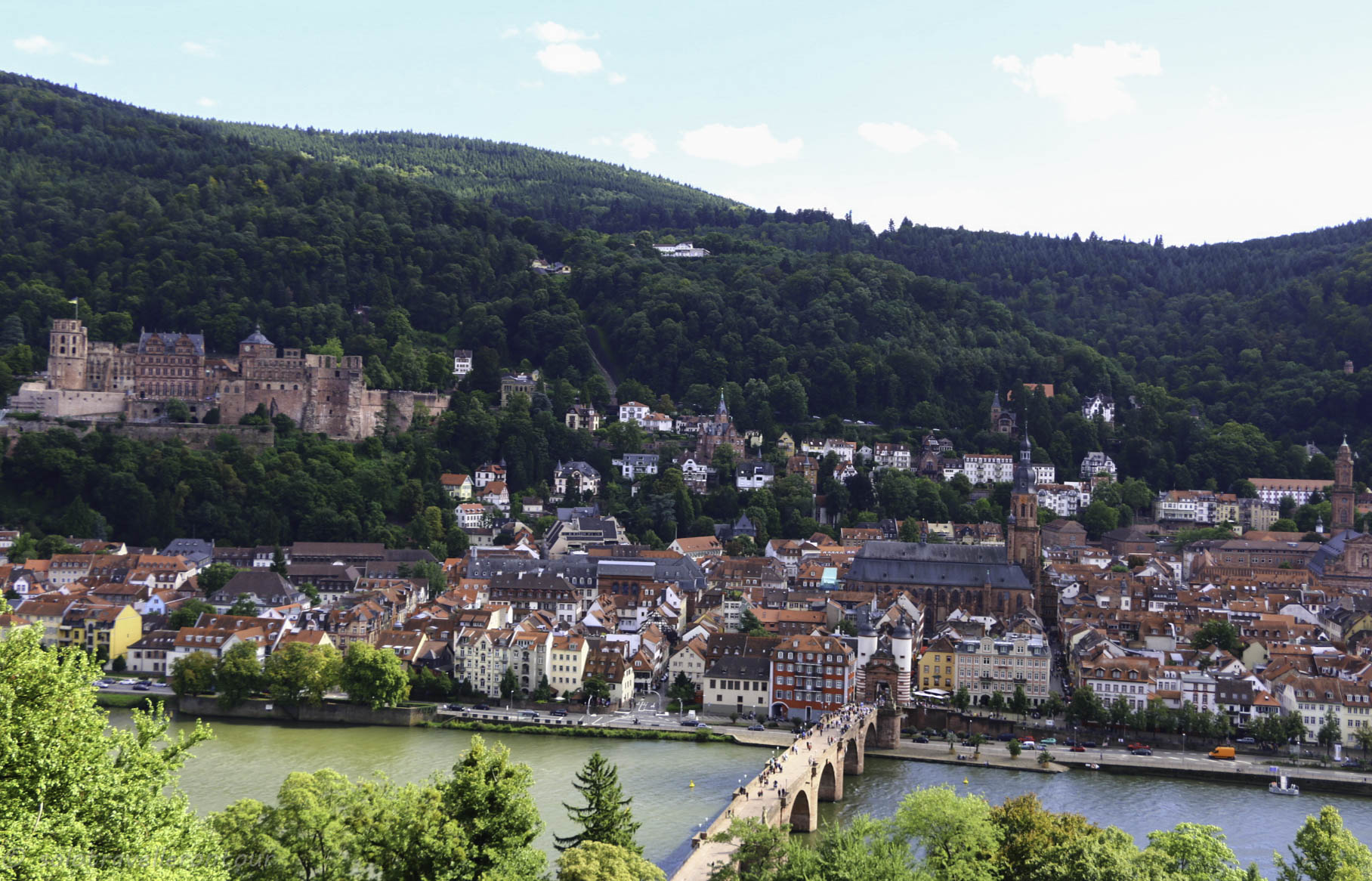 Heidelberg I – The arrival

After some busy weeks at work I decided it was time for a little trip away from Cologne. So on a short notice I thought it was time to head to a city I always wanted to visit – Heidelberg.

Train tickets and hotel booked I left the office a little bit earlier than usual on a Friday afternoon to get the direct train to Heidelberg from Cologne Central station. Unfortunately I was once again reminded that some stereotypes about Germany are not always correct – the train was delayed by 20 minutes. Well, at least I had time to get some food and drinks for the journey. 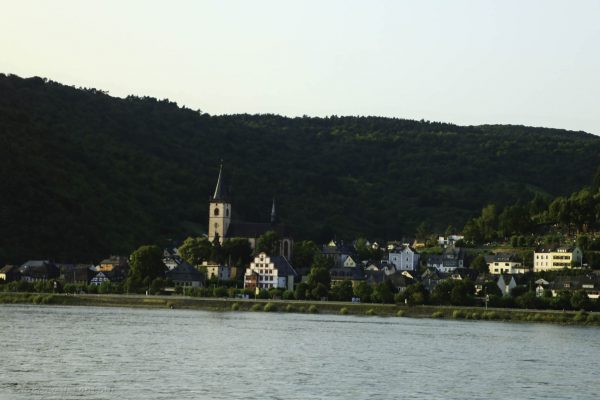 One village along the river Rhine 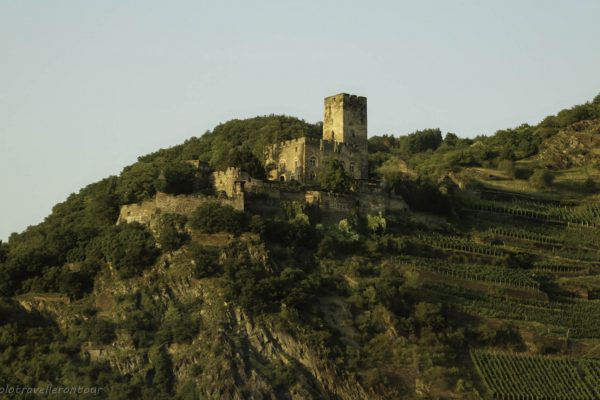 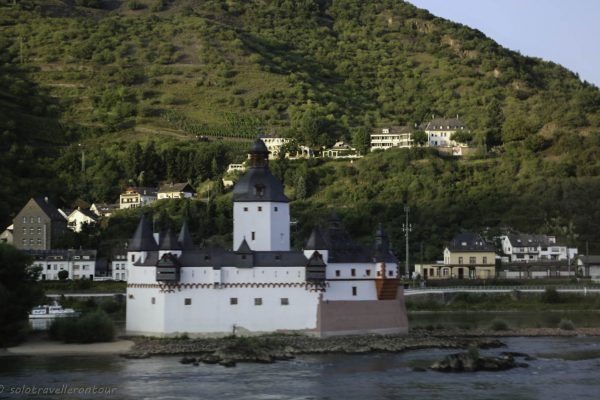 The IC train finally arriving I got my comfortable pre-booked seat at the window. And it seems I was lucky as the train took one of the most scenic train routes in Germany – along the Rhine valley. It is famous mainly for the amount of castles you pass like Marksburg or Pfalzgrafenstein on an island in the middle of the river, the medieval towns and villages like Remagen, Bacharach and Bingen. These places alone would be reason enough to get off the train at every single stop. But you can also just enjoy the scenery during the train journey – hills, wine fields and just the blue water of the river Rhine that never seems to stop. Yes, it is one great rail journey. And I really struggled not to look out of the window. Though unfortunately I was on the wrong side, looking away from the river. Thankfully the train was not busy, so I could on occasion sit somewhere else to enjoy the view. 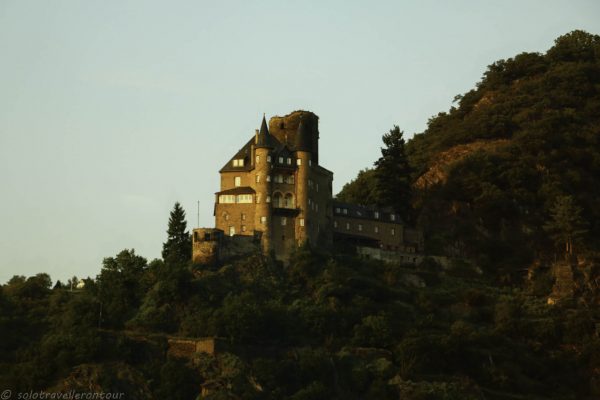 Quite a few castles are overlooking the valley from the hills 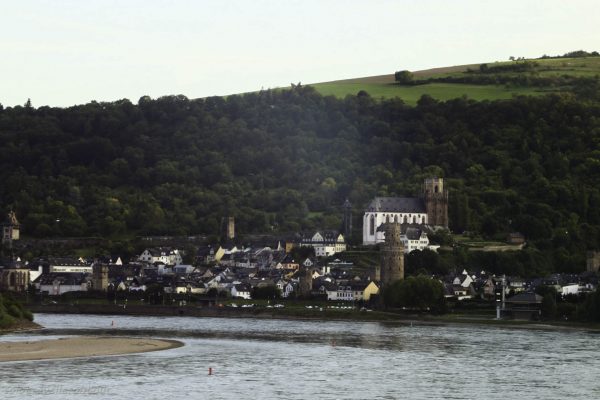 There are some beautiful villages along the river 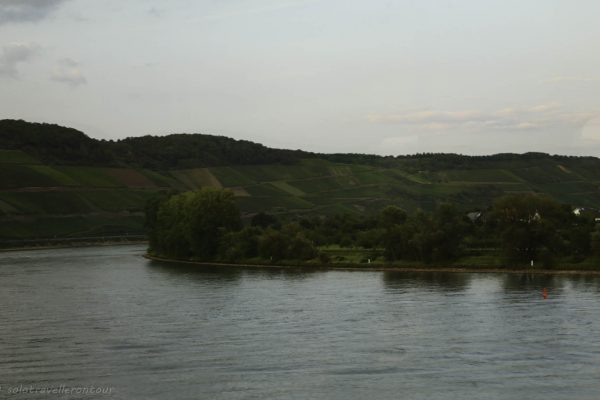 Some wine fields next to the river

The only other distraction to the journey was shortly before arriving in Heidelberg – the appearance of a birthday cake that a young woman brought in got the attention of the passengers. Unfortunately despite the best efforts of everyone we did not succeed to convince her that the great cake would be a waste at a birthday party and would be much more appreciated in the train. It was a shame – as the cake really smelled good!!!

Arriving at Heidelberg Central Station it was a short 10 minute tram ride and I finally arrived at the Hotel Bayrischer Hof, my home for the next two nights at the Bismarkplatz. I liked the hotel itself and the location. Here is my review of the hotel.

Refreshed and hungry it was time to find a nice place for dinner. The reception of the hotel was happy to recommend a local brewery house – Vetter’s Alt. It sounded a place to my liking!!!

So off I went heading towards the main pedestrian road Haupstr. that would lead me to the promised land. Obviously it started to rain as soon I stepped foot out of the hotel. My umbrella protected me of the rain, though the first impression of this long street flanked by some beautiful old buildings was not perfect, but still enjoyable. Seeing the smaller churches on route lighten up was very nice – but the view of the Heiliggeistkirche (Church of the Holy Spirit) and the castle standing proudly above the Old Town was just stunning – even in the rain. I even forgot that it was already after 9pm and that I was hungry. Though, that lasted only a few seconds. 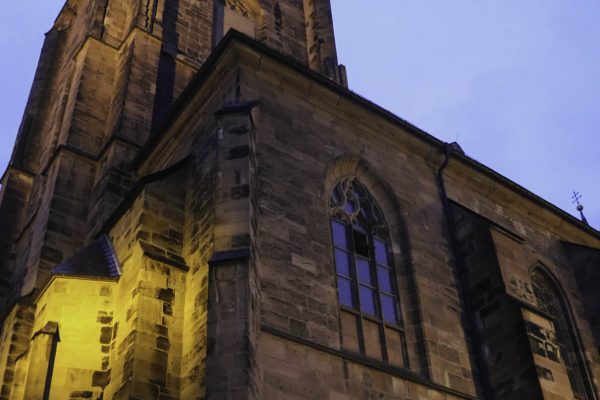 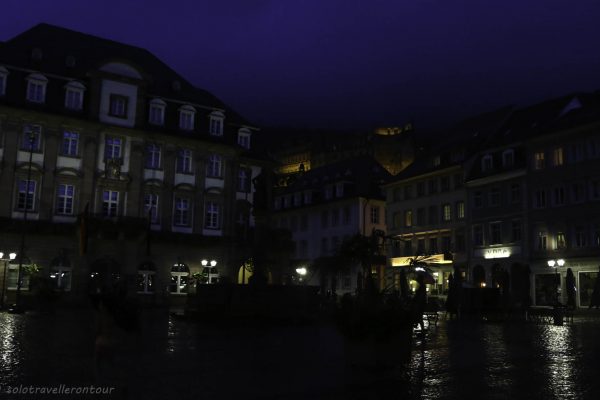 View of the main square, the citz hall and the castle 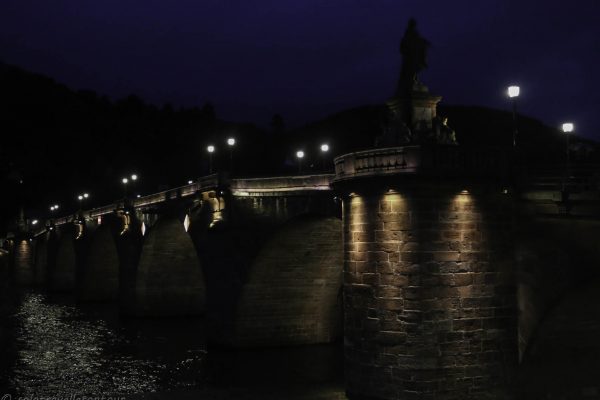 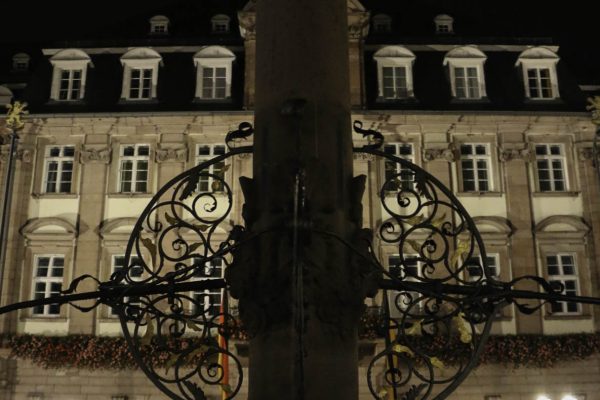 The City Hall by night

The Vetter’s Alt Brewery is behind the Heiliggeistkirche on Steingasse, the street that leads to the famous Old Bridge. It is a very traditional brewery house with wooden tables and chairs and three copper vats and it has a very cosy atmosphere (it is a little bit dark in there) as it is visited not just by tourists, but by locals as well. They have seats outside as well if you want to enjoy the good weather. They offer different versions fo their own brewed beer – and you can buy a “taster” menu with four little glasses containing their light, dark, heavy and seasonal beer. Unfortunately they had only three different brands on offer that night, so I decide to stick with their larger glasses instead (it is cheaper as well). The dark beer was good, but prefered the lager. They also serve traditional food, and I took a chance to finally try the famous regional dish I have heard about – Saumagen with dumpling and a dark beer sauce. And it was very very tasty. Jackpot. It is also easy to have a chat with the other guests, and even met a Dutch couple who overheard the recommendation given by the reception – they clearly followed me.  Overall I really liked the place. Friendly service, good food, nice beer and a nice atmosphere. It was a great start to my culinary exploration of the area. 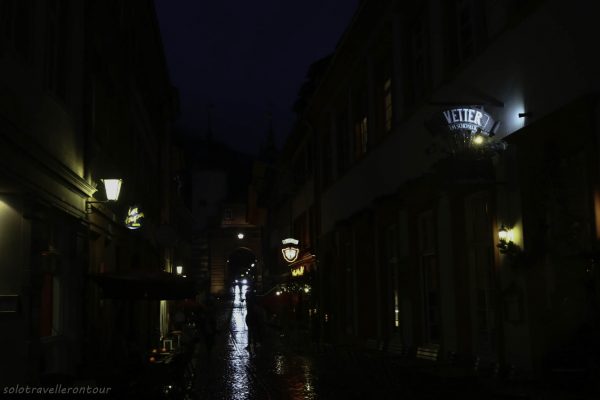 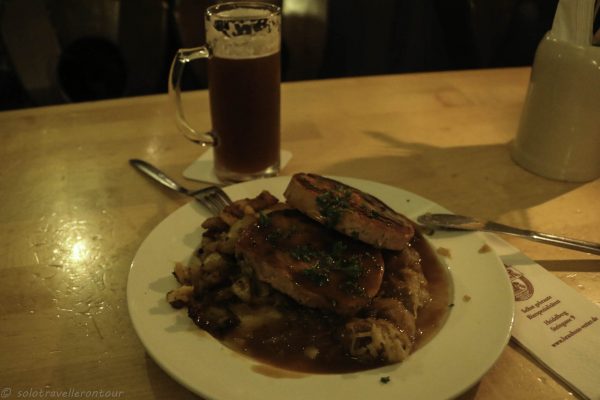 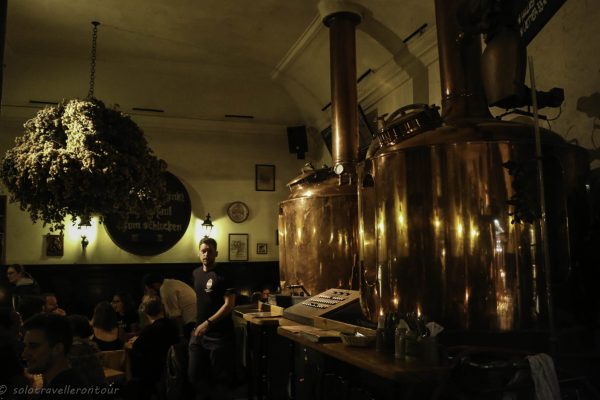 Thankfully the rain has stopped when I left the brewery house, so I took the opportunity doing a little detour while heading back to the hotel. And it became very obvious that Heidelberg is a beautiful medieval town – especially by night. There are so many nice old buildings and little alleys that just invites you to explore them. The parallel street of Hauptstr. – Untere Str. also offers several bars and pubs to have one or two drinks – and it was busy there at night.

Overall it was a great first taste of Heidelberg, especially seeing some of the highlights of the town – like the castle, Heiliggeistkirche or the gate of the Old Bridge. You might say I am sucker for such towns, and I knew instantly that I will love the short stay in this town. 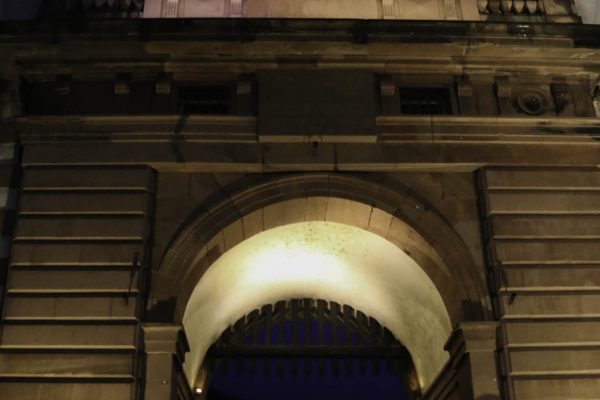 The gate of the Old bridge 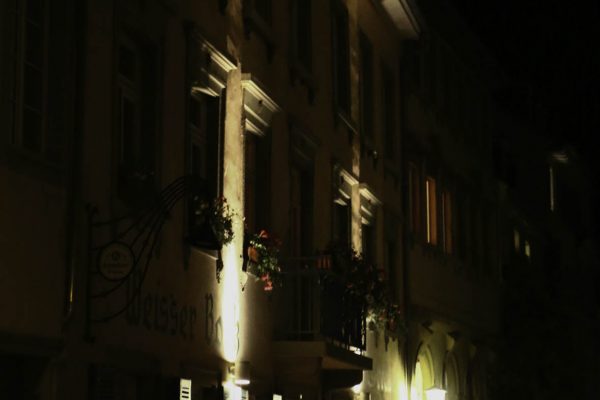 One of the many beautiful spots in the Old Town 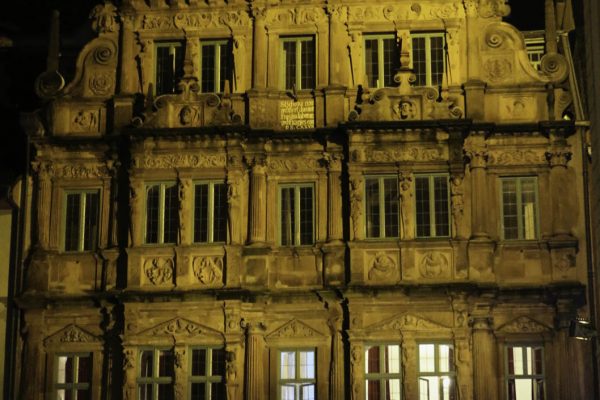 One of the old buildings in town 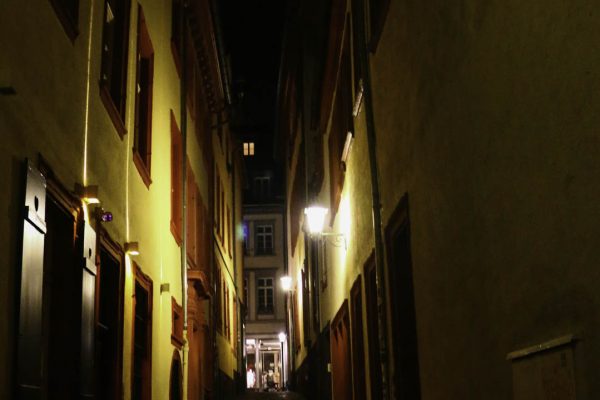 One of the little alleys in the Old Town

I was back at the hotel just before midnight (hotel is locked after 11pm – so you need the key card) and I was glad to fall into my warm bed, looking forward to really explore Heidelberg the following day. 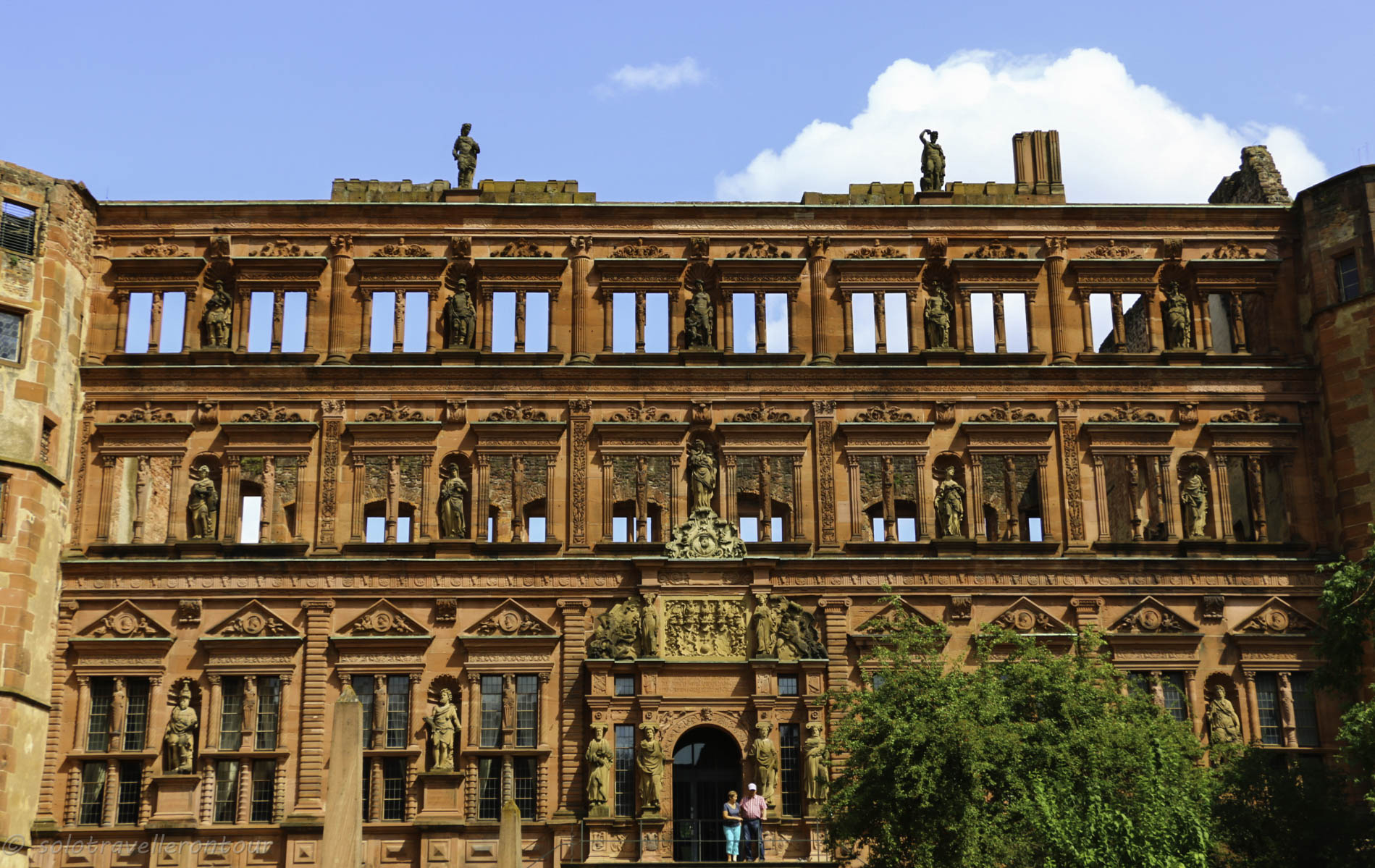 Heidelberg III – Visiting the past 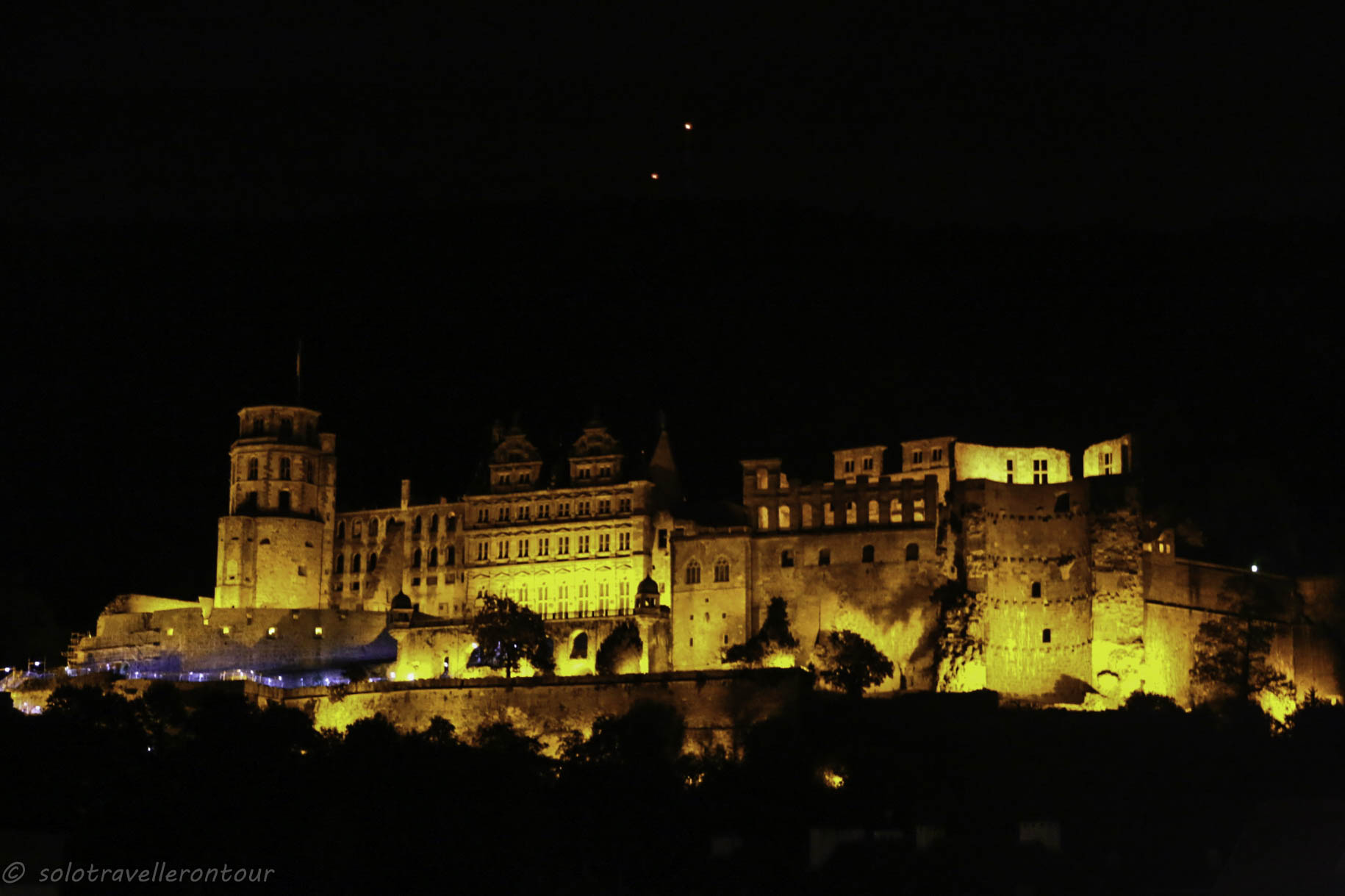 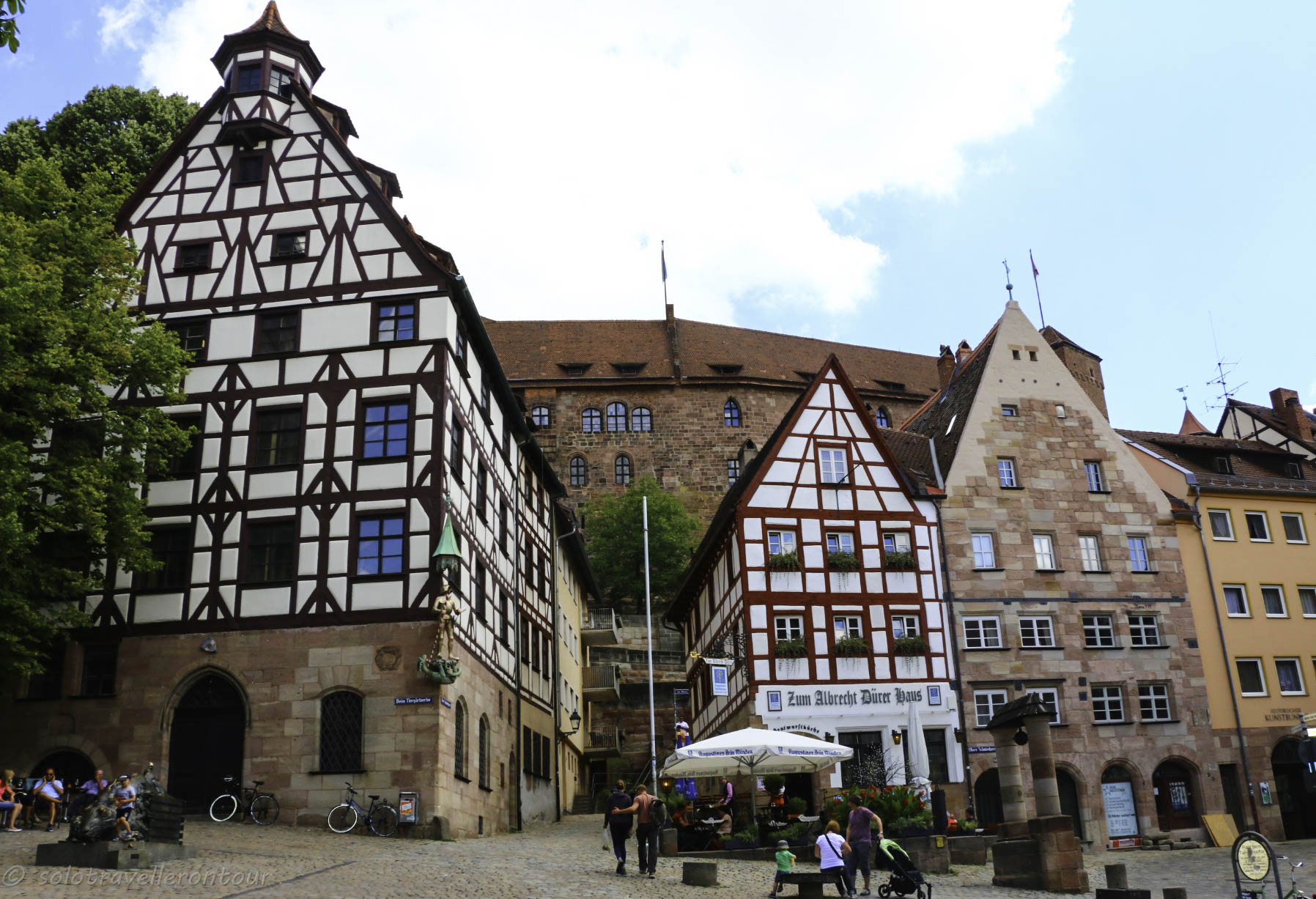 A musical trip to Nuremberg