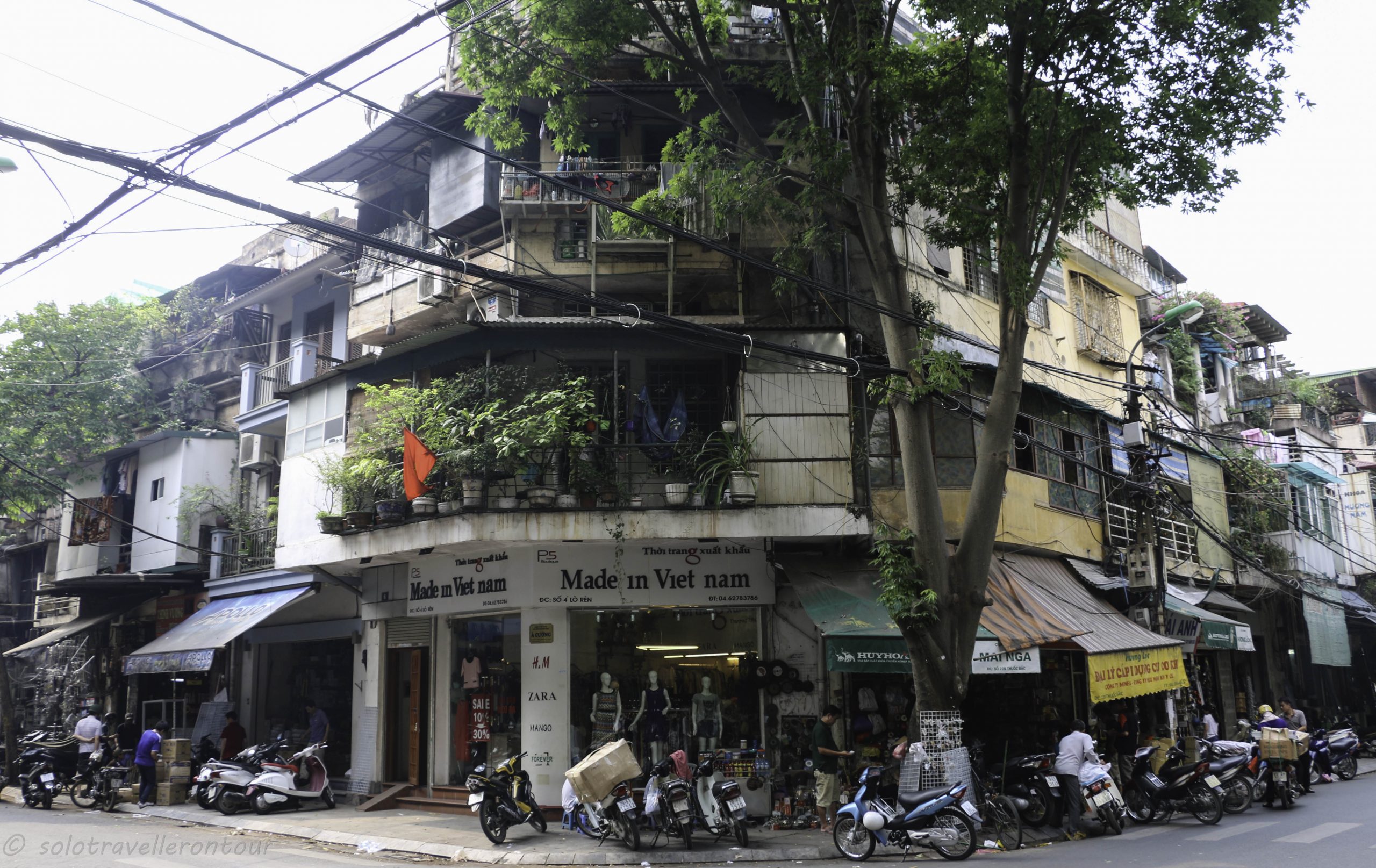 1. A deja vu – arriving in Hanoi…again

It was time. After some planning, passing my motorbike test on the 2. May, getting my International Licence on the 3. May I was on my way to the airport once again to start my third Vietnam adventure on the 4. May. Talking about German efficiency.

After my mixed experience with Air China the year before, and the Vietnamese flight decided after a week to jump up the day I wanted to book the flight I had my first long haul flight with Thai Airways from Frankfurt. I must admit, I was a bit excited to be on the new Airbus 380. Well, I shouldn’t have. I don’t like it. Yes, it is a very spacious plane, and looks very welcoming, but it has a design flow that ruins everything for me. I always get a window seat so I can easily rest my head against the wall for a good sleep. I got a window seat…but not actually a wall to lean against, as there was a gap of the size of a child. On the positive side, I had the whole row for myself, so I could actually lay down properly. To continue with the positives, the service of Thai Airways is good, as is the food. Transit at Suvarnabhumi Airport is straightforward. Go through one security check and you are near the next gate. Quite a few airports could learn from it. Even 55 minutes transit time I had for my return flight was more than enough. So would definitely fly with them again.

18 hours after leaving my flat I finally arrived at Hanoi Airport, where 518 days ago my first Vietnam adventure started. But it was different this time….I knew what I was doing. Or so I thought.
This time I had no pre-arranged Visa. I went for a second time through the VOA process. I got the invitation letter once again through www.vietnamvisapro.net and again it worked well. But things has also changed at Hanoi Airport. Was I last time greeted by a massive queue at the little VOA there were only a handful people at the now modern looking VOA area. And despite seeing me now as a rather experienced Vietnam traveler I made a beginners mistake. I forgot to fill in the immigration form at home. So I had to queue twice. Once to get the form, and second time to return the filled in form with a photo and the $25. Seeing a larger group approaching from another flight I filled in the for. In record time and jumped in front of the desk before the group. It looked strange, but it saved time.
Waiting time was only 20 minute, and after making the immigration officers laugh when I said my Xin Chao and Ban Khoe Khong I arrived in time when my bag came out. Perfect timing.

At the arrival hall the usual procedure happened. Finding an exchange booth for a few Dong and a new sim card.
I got the impression that everything has changed since my first visit 1 1/2 years ago. Everything looked so different. Maybe I just imagined things. Anyhow, you can find everything you need on the bottom floor, on the far left side. Like back at the airport in HCMC the exchange rate here was actually very good, so instead of just getting a few Dong I got a few million that could keep me going for a week. Why wasting time finding a place in Hanoi to exchange money, and maybe save a $ or two. There are also several booth selling Sim cards. One looked a little bit like an official Viettel booth, but it was very busy. So I took the risk and went to the one next to it. The girl here showed me several Viettel packages, with varying data volume and call allowance. I took the offer of unlimited Internet for a month, 10 minute international calls and 100 minutes national call – all for 350.000 Dong. I could have needed few more minutes for international calls and some more credits for sending messages, but otherwise it was perfect for my stay.

Having all admin work out of the way, it was time for pleasure – getting a cold ca fe sua da to survive the heat that would surely welcome me outside. I impressed the staff with my ability to say a few words in Vietnamese I got the beverage I was waiting for a very very long time. But as it happens…if you wait for such a long time you might get disappointed – and the coffee was not that good.

The next step was something that terrified me last time – stepping out of the airport is like being like a little deer on a dining plate while predators eyeing you – in this case taxi drivers waiting to jump on you. This time I didn’t need to worry as I decided to try out the brand new shuttle between the airport and Hanoi train station. Still people will approach you to offer their taxis. Unfortunately even the official Vietnam Airlines shuttle tries to rip off tourists. The official price to their office in the Old Quarter is 32.000 (though the minibus waits till it is full) they might offer you a ride for an inflated price of up to 200.000 Dong, keeping the additional fee for themselves. Avoid them at all cost.

However, the new bus in addition of the slower local buses was worth a try as it only takes 45 minutes in Hanoi for only 30.000 Dong, and leaves the airport every 30 minutes.

The new shuttle bus leaves on the second row of platform 19, which is the last one on the far right side when leaving the airport. You can see staff in an orange short. The bus has A/C with enough space for luggage. The staff on the bus speak English and can show you on the map where the various stops are and what the best stop for your hotel is. The bus actually does not stop inside the Old Quarter, but stops on the main road Yen Phu on the west side of the Old Quarter, once at Cau Long Bien Bridge and Cao Chuong Duong Bridge, making down its way to the train station via Hoan Kiem lake. So from the various station you can reach all hotels in the Old Quarter very easily

The bus ride itself was pleasant, giving me a chance to see some bits of Hanoi I missed by taking a taxi last time. I was advised to head off the bus at one of the bridges, but in hindsight I should have left a stop later – still, it was a relaxed way to get into Hanoi for a less than 10% what a taxi would cost.

And here I was again, at a public bus station just outside. Not too far where the night bus from Sapa dropped me off after midnight back in December 2014. But at least this time I know where I was. And I was ready to start my trip. 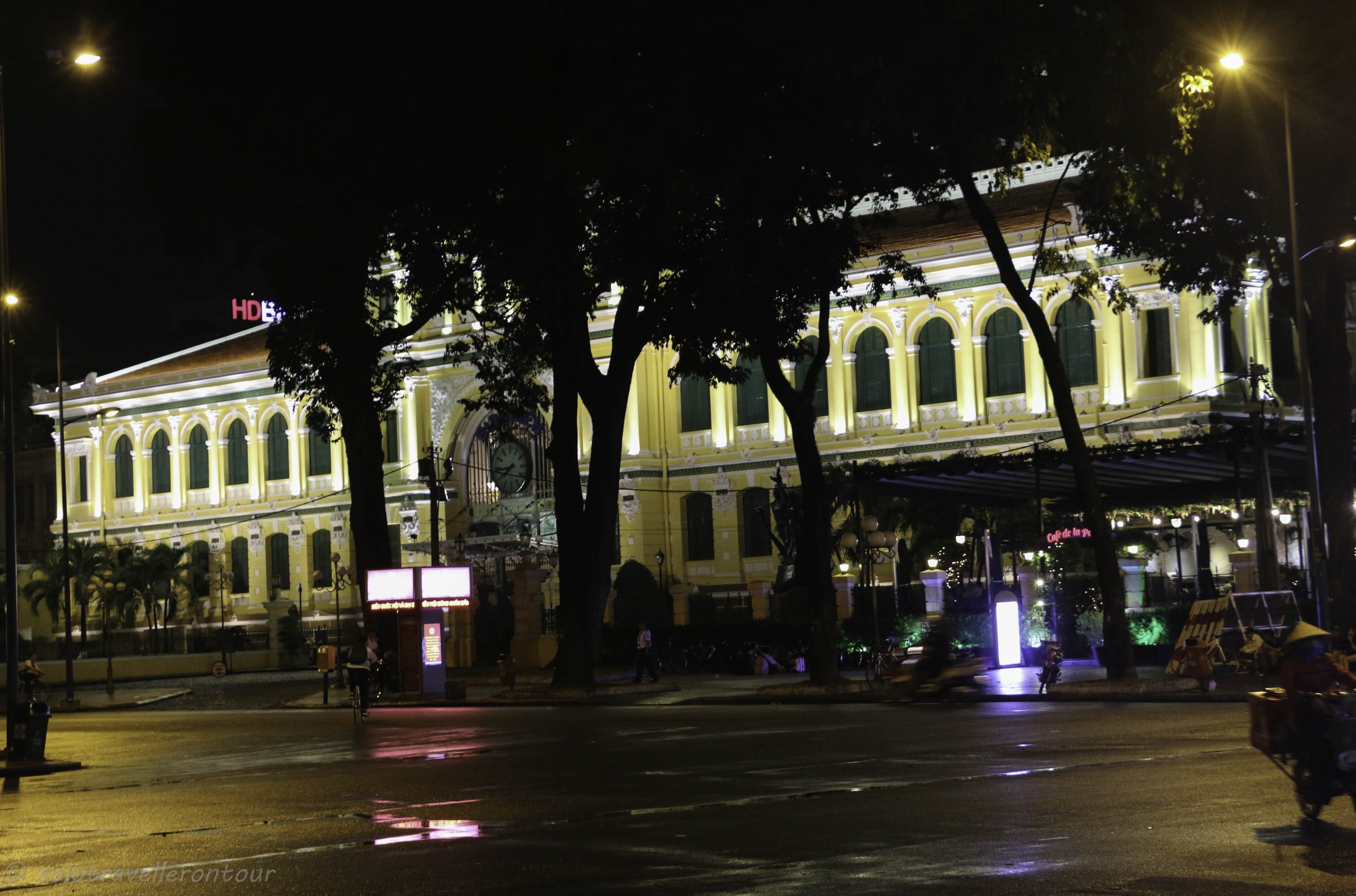 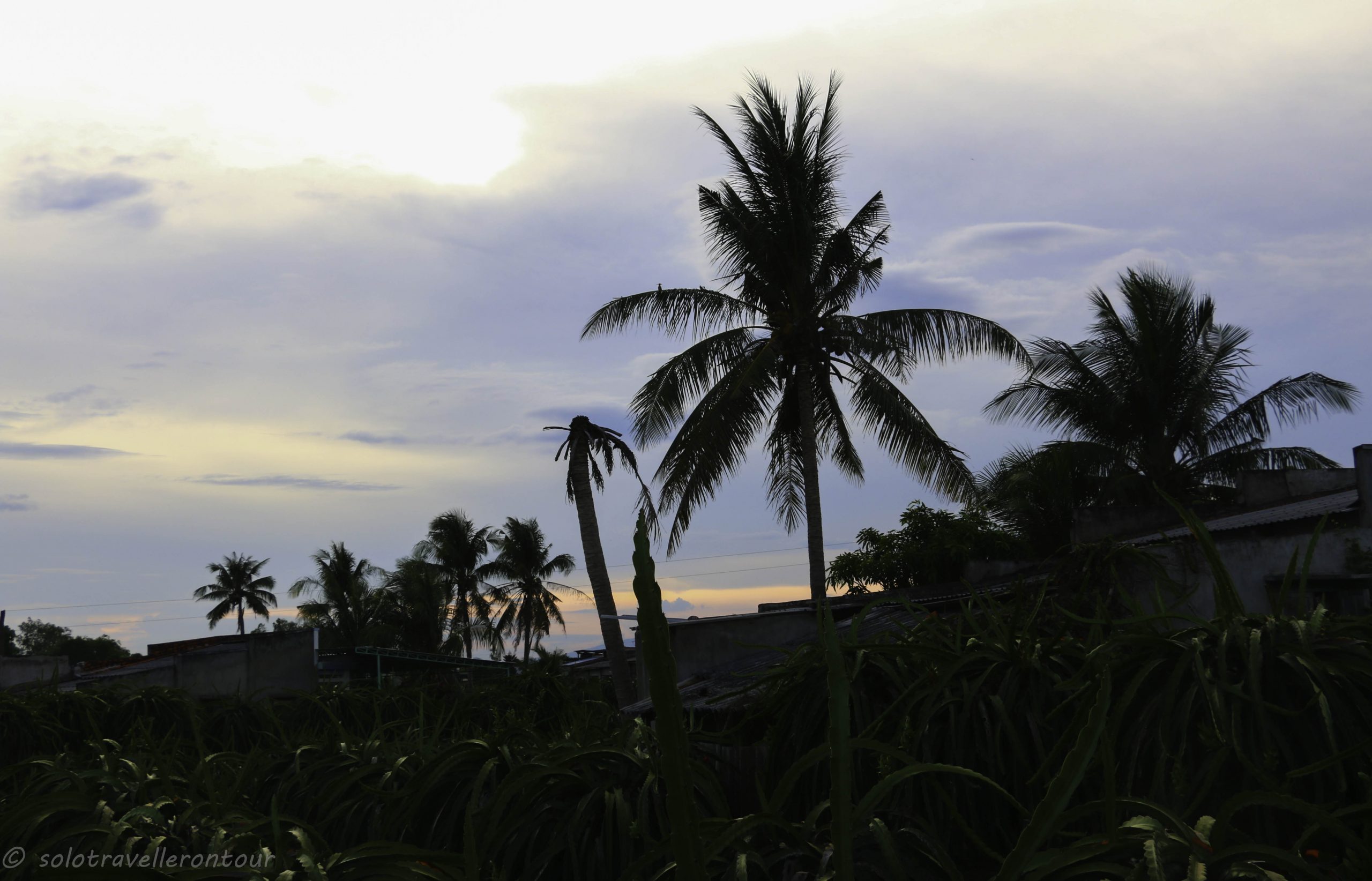 11. A real homestay in Phan Thiet 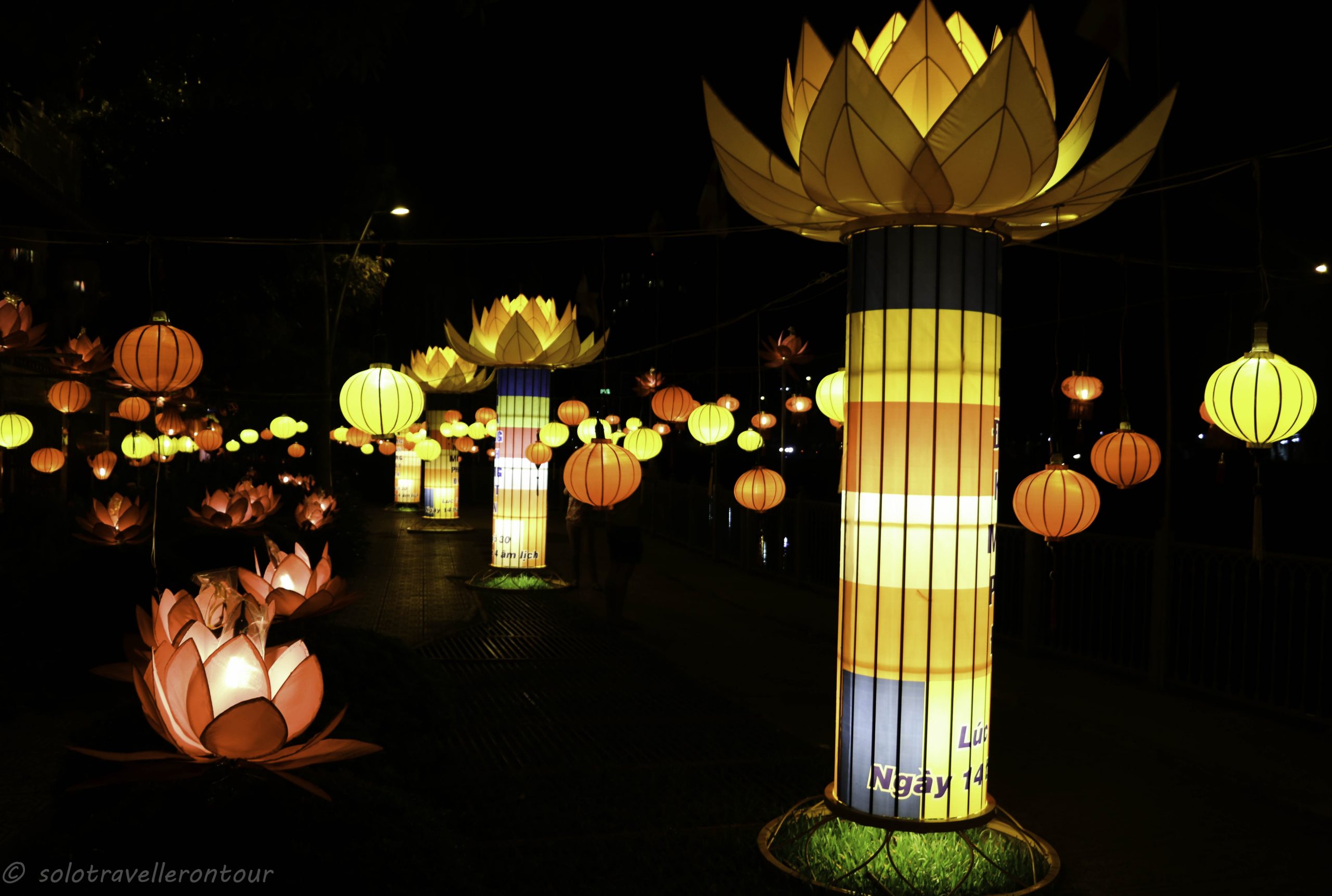