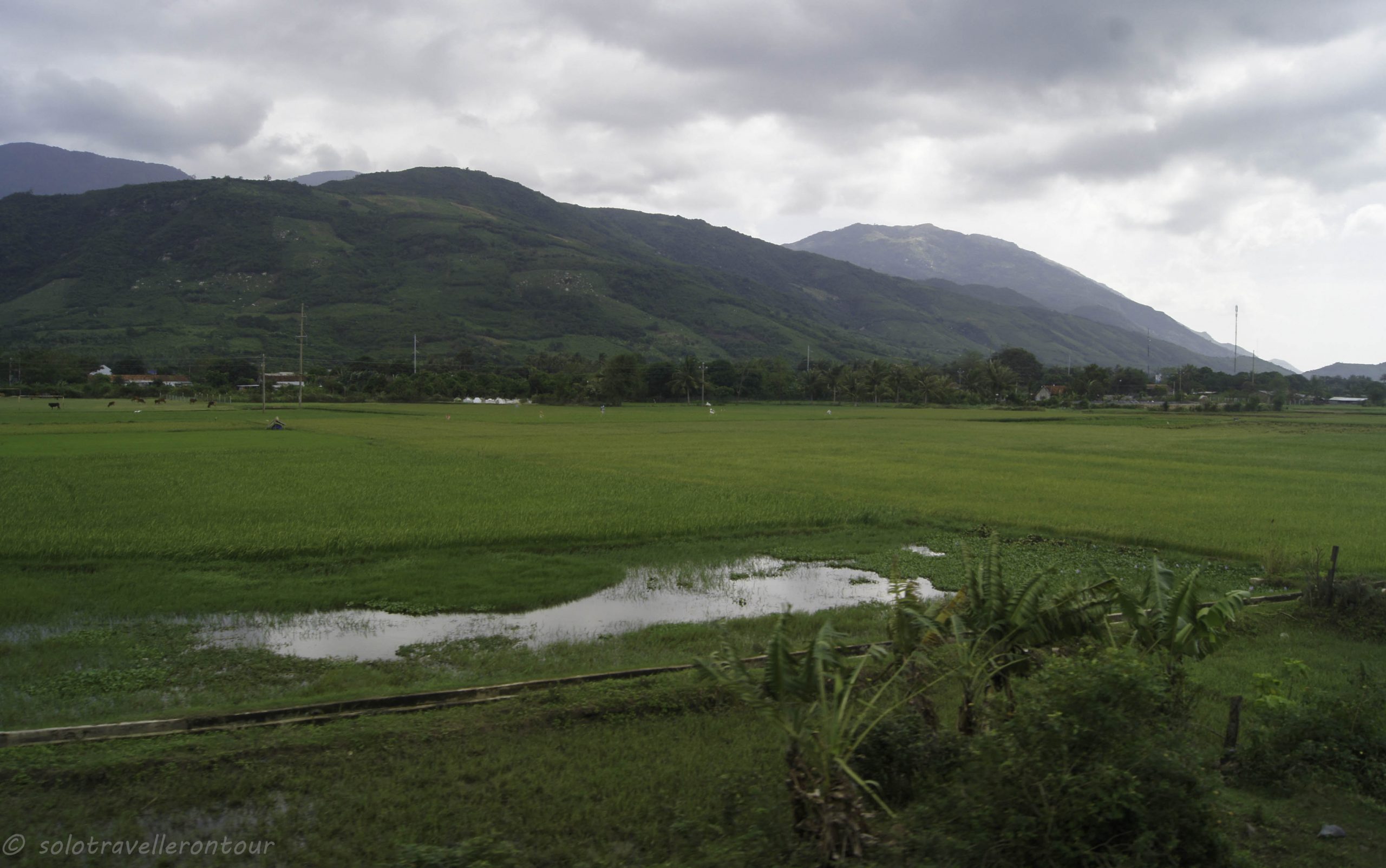 19. A very very very long train journey to the south

After my stay in Hoi An it was time to get to Ho Chi Minh. Instead of taking the easy way by plane I was lucky enough to get the last soft sleeper berth on the train leaving Danang at 01:30am. I took the last shuttle bus from Hoi An to Danang at 10pm. This minibus ride costs 200,000 Dong to the train station, and you get picked up from your hotel. 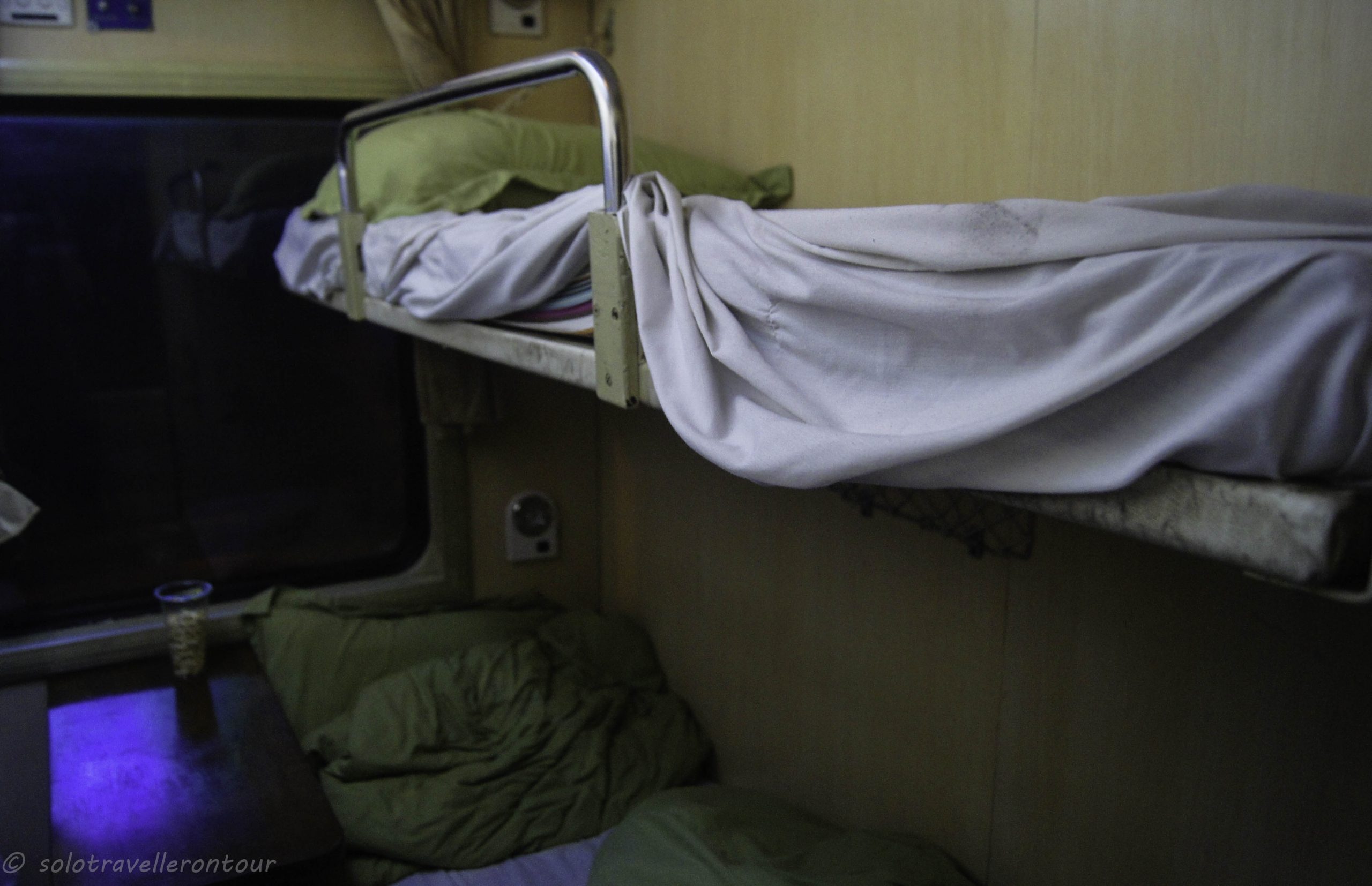 It was an uneventful journey of less than an hour, but at least I met another German couple (I have never met so many Germans during any of my previous trips…) who took the same train. At least I wouldn’t be on my own at the station.

We arrived just when the nearby shops and cafes closed, so there was no other option than making yourself comfortable inside the station. At least the shop was open for a bit longer to buy some snacks (you could also buy noodle pots and they had hot water if you need food). After that it was sitting around for 2 1/2 hours on typical metal seats. While I was reading the station got busier as more and more tourists arrived, waiting for the same train.

Finally the wait was over and the train arrived on time (once again). The usual search for the right carriage started, and I was glad to be finally on the train. Just before I went into my compartment one of the staff gave me a sheet – only a bit later I realised I should have asked for two. My bed was used during the previous part of the journey, and had to decide if I either wanted to lie on top or underneath a used sheet. I just used my new one and wrapped myself in it. So if you enter the train outside of Hanoi and HCMC make sure you ask for two new sheets, or bring one of the cheapish silk linen you can buy everywhere…

I managed to get my bag up to the space over the door without waking up any of the three Vietnamese I was sharing the cabin with. I should have gotten some bonus points for that feat.

I actually fell asleep quite fast, but during the night I realised why I prefer the lower berth. On the upper one you really feel most movement of the train, especially the bumpy bits, and in some instances I was shaken from one to the other side. Despite some of these wake-up shakes I managed to sleep quite a bit, and only after 10:30 I decided to stay up. I made myself comfortable to read for a while, and from time to time to enjoy the passing scenery. I must admit I actually enjoyed that down time. Throughout the trip so far I actually didn’t find time to just sit back and read. I had my quiet time in cafes, but never really just lied down and just do nothing or relax. So it was actually very pleasant to do so.

The facilities on the train was as usual. The Western style toilet was pretty clean (I assume as most passengers in my carriage were Vietnamese that the Asian style toilets was mainly used, and not the Western style one) and from time to time a woman came around with a trolley, selling some sweets, snacks, cold drinks and coffee. This was actually quite handy – especially for breakfast (I still had my Banh Mi for breakfast and lunch).

I also stretched my legs a bit walking along the corridor, or going to the little bit between the  carriages where you were able to open the window to enjoy the view or to take some pictures. The train passed some places that sounded quite interesting – like Mui Ne, Nha Trang or Quy Nhon. And the passing scenery was very nice – changing from mountains, the sea, cliffs, rice paddies and forests. It was great just to look out of the window – either from inside the compartment or from the floor. This actually offered some changes from just sitting back and reading. 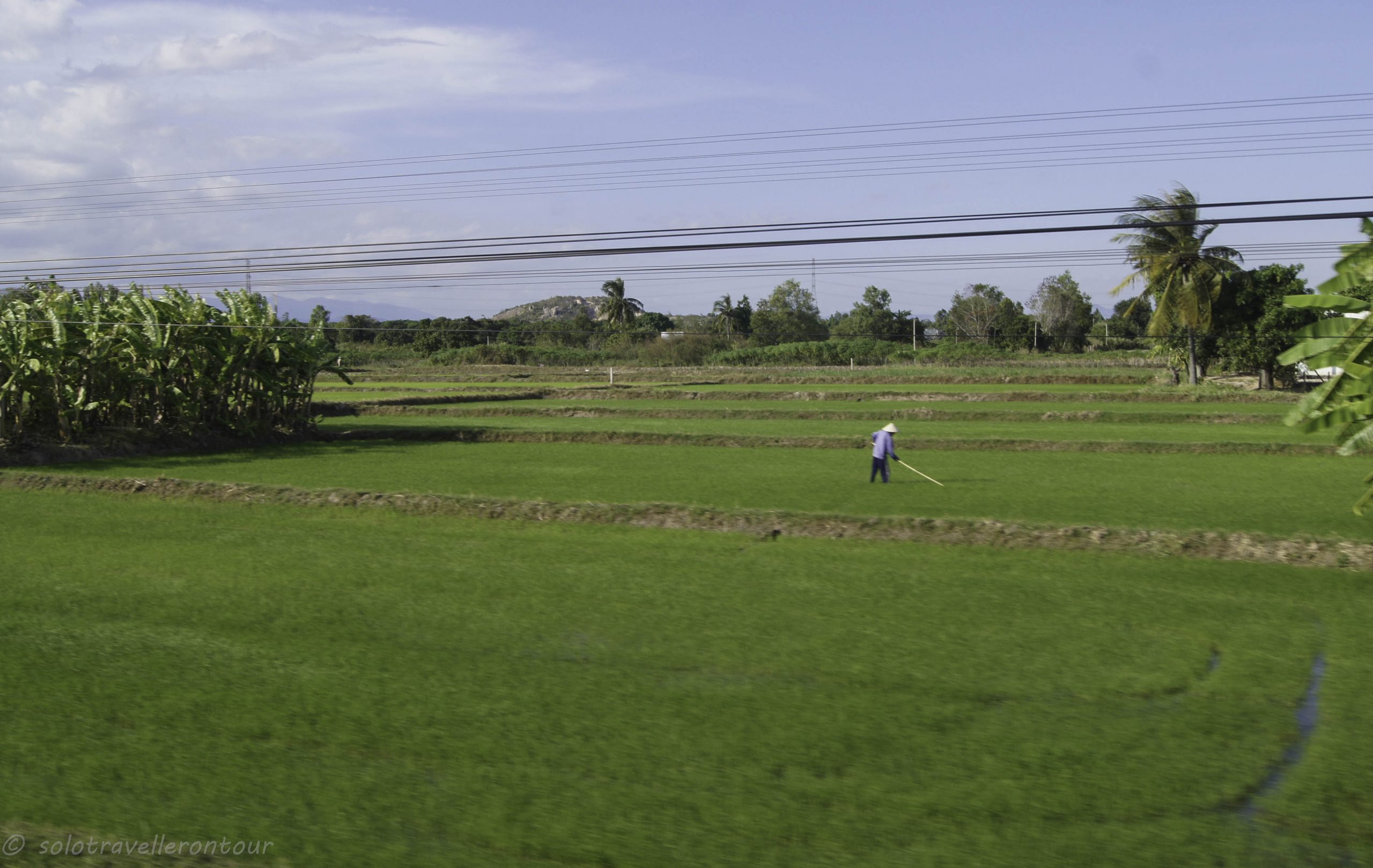 Another advantage of taking the train was getting to know some locals on the train. The other passengers in my compartment were all Vietnamese, but none spoke English, and a few of them departed the train (the younger ones helped some of the older passengers by carrying their bags when leaving the train – which was quite nice), just to be replaced by new local passengers. Around lunch time an elderly woman got to the lower berth I was sitting on earlier (it is acceptable on those trains for people who slept in the upper berth to sit down on the lower ones – except when someone wants to sleep there – as it is not possible to sit on the upper ones), looked up to me, and suddenly started to speak to me in Vietnamese with a slightly raised voice. I was looking around slightly confused and worried that I have done something wrong (did I break something? Did I offend anyone? – I had no idea). After I didn’t respond she repeated her words with her voice raised even more. Again – I had no clue what to say. She just shrugged and ignored me.
A couple of hours later a Vietnamese man passed our compartment and saw me, and started to speak to me in English. He asked the usual question where I am from, when I got onto the train and if I enjoyed Vietnam so far. It turned out that he was living in the US now and travelling through Vietnam to show his kids his home country. Seeing me speaking with him the elderly woman suddenly repeated her words to me. As before I looked absolute puzzled (well, maybe even more confused than usual), and the man was suddenly laughing. He checked if I understood what she said – I said of course not (as if my facial impression didn’t give me away!!!). He then translated for me saying that she thinks I am very handsome, and if I am married, and if I was heading to HCMC. Looking slightly worried at her (she was a “bit” out of my age range to be honest!!!!) I said No and Yes. One translation later the woman was throwing another wave of Vietnamese words into my direction – and again I had no clue. I patiently (but very worried) waited for the translation, and with a big grin the man asked if I would be interested to meet her grand-niece and would consider marry her – and that she was very attractive. Well – considering I thought I somehow upset her and that she wanted to kill me it was a slight different meaning. I thanked her and declined the proposal politely (well – after that I was thinking that the after three proposals so far that I maybe should check out the next one….it would be an expensive souvenir from a holiday though…). Well – at least everyone was having a laugh. I spoke to some other locals who were in the other compartment but came to mine, and suddenly I got a bowl of noodles and popcorn (both from the little trolley in front of me, courtesy of the locals throughout the carriage. It was actually a pleasant atmosphere. 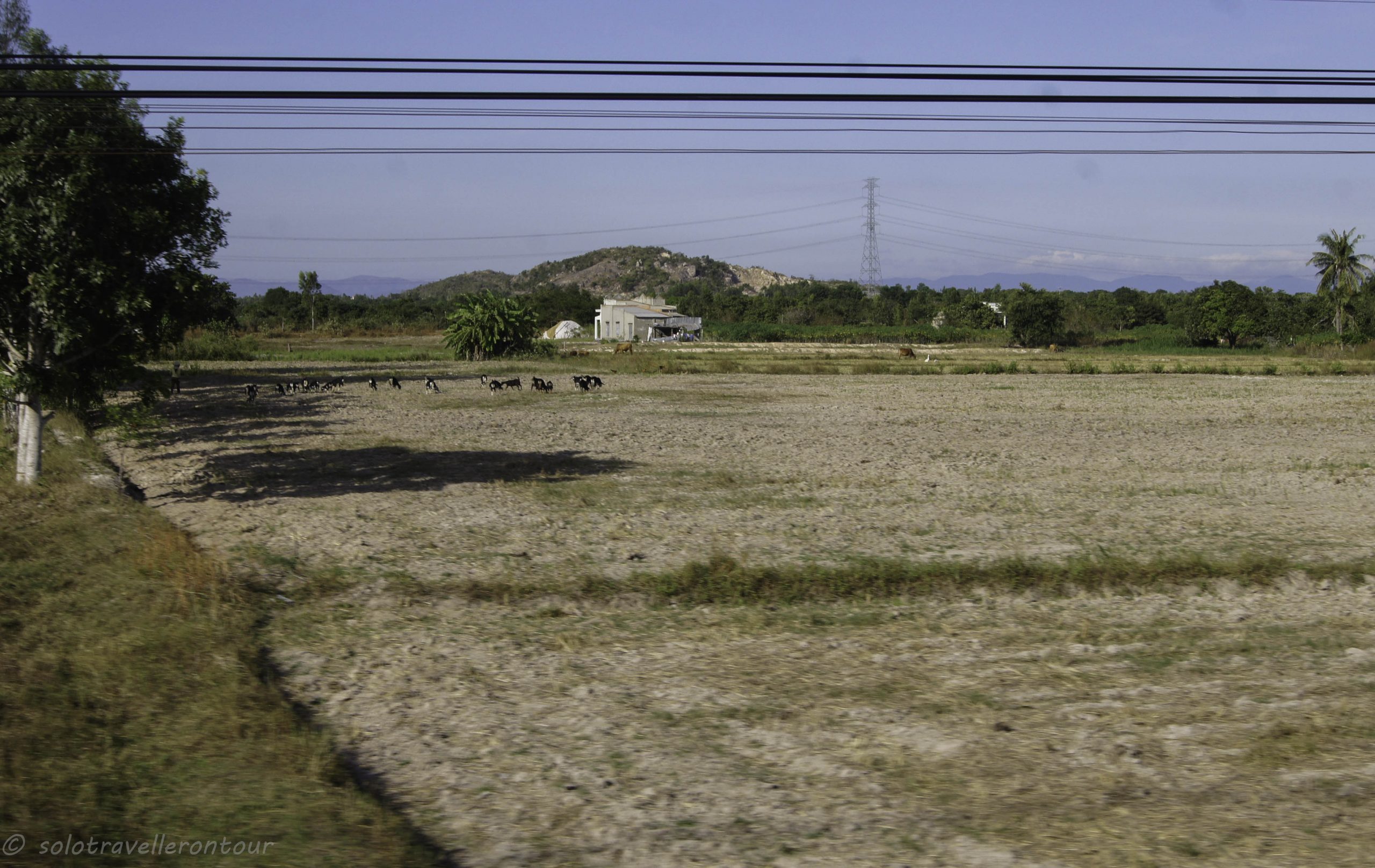 I was also able to relax a bit more as well, but after over 18 hours I started to see the outskirts of HCMC, and once again the train arrived on time – just after 8pm.

So here are my thoughts about this train journey:

Is being on the train for over 18 hours the most comfortable way to travel? Of course not.

Is it very uncomfortable? No – especially if you get the lower berth.

Is it a nice experience? You bet.

I really enjoyed it as I was able to switch off without feeling guilty for not doing anything. It was nice to meet and speak to some locals (well – it is better if they speak English…). Having a second new sheet would have been helpful, but I survived it. Toilets were surprisingly clean, and once again I didn’t see any insects near my bed – a big bonus.
So if you have time, it is a nice way to travel – even though it is much longer than flying. But very often it is not just getting from A to B, but actually to enjoy a new experience of the journey between A and B. Because of that I must admit that I enjoyed this very long train journey. And to be honest – it feels different if you walked out of train station into a brand new city – rather than arriving at an airport that looks the same all over the world.