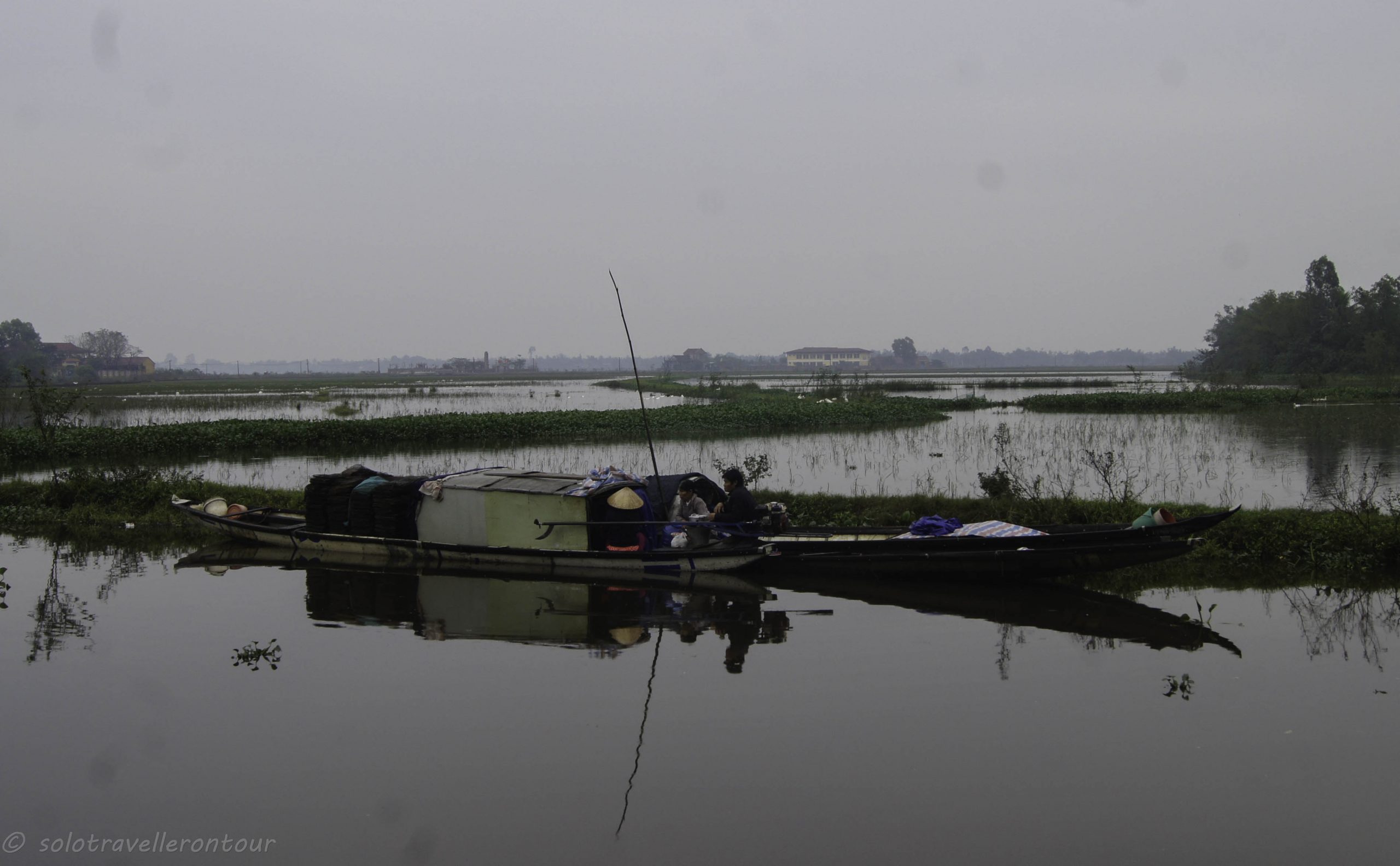 17. Breaking a habit – taking a tourist bus to Hoi An

After some enjoyable time in Hue, where I met lots of nice people (who I met again during my trip) it was time to leave Hue to get to Hoi An.

The recommend way to get to Hoi An from Hue is the train – apparently it is one of the most beautiful train journey in Vietnam, as the train travels on the top of the Hai Van Pass- which is the mountain range separating north and south Vietnam (not the old official border though) and is the cause of the different weather pattern in central Vietnam. The fast buses however, are not travelling through the pass, but through the tunnel – hence you would miss the great view.

However, I saw a flyer in my hotel advertising a tourist bus to Hoi An that was stopping at four places, which meant that you could get out, walk around and get a better view. 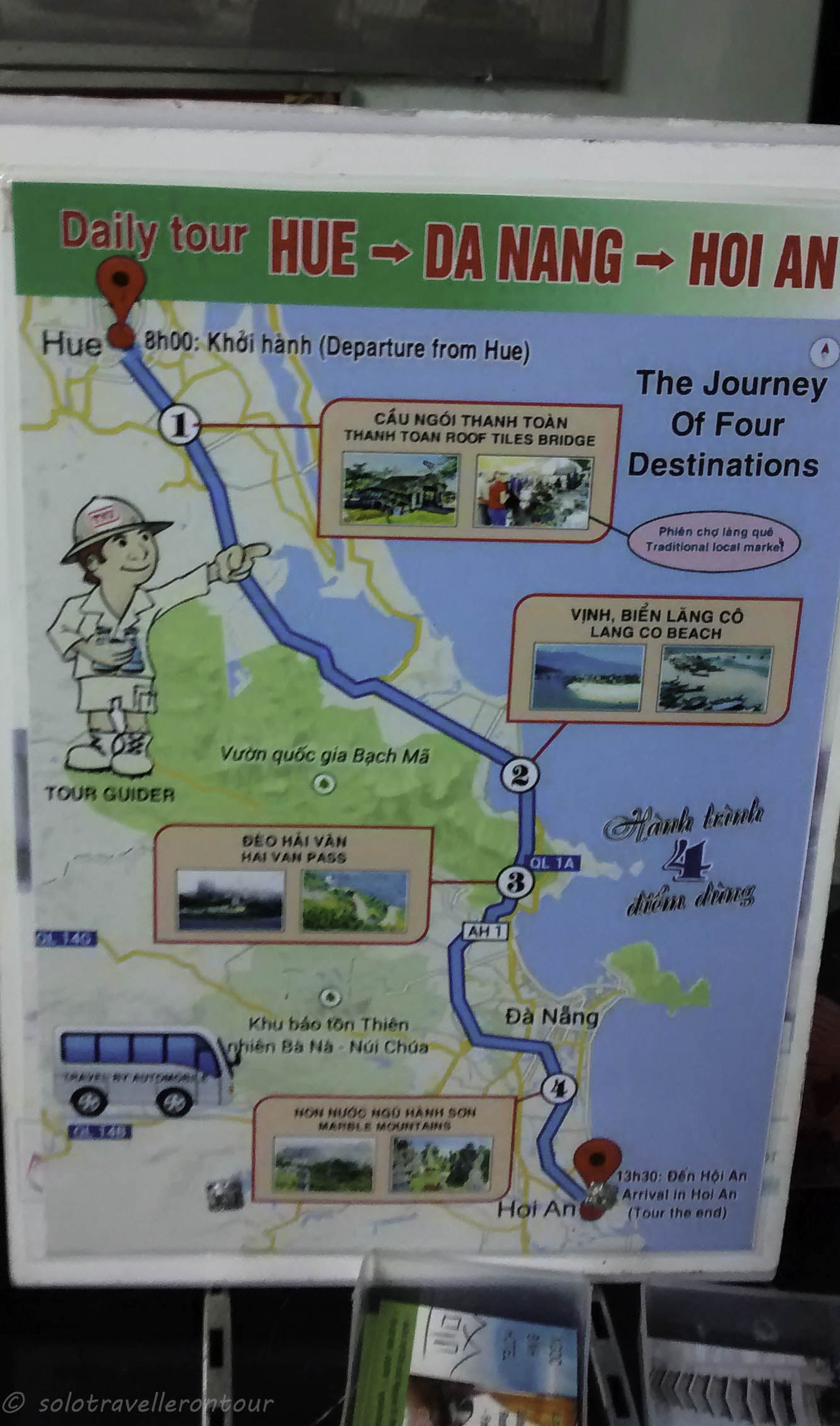 As it included a stop at the Hai Van pass, I decided not to take the train, but to take the bus. The disadvantage was that the bus would take half a day (the journey was advertised to take 5 1/2 hours), and the cost was higher as well (£12). However, at least I would arrive in Hoi An, and not in Danang.

So on time I was pickled up from my hotel (great service) around 8:30, and I got one of the single seats in one of the minibuses you can see all over Vietnam. The bus was not full after we picked up everyone, so we had enough space for our bags and it didn’t feel cramped at all.

So we headed out of Hue to our first stop: Thanh Troan Roof Tile bridge – approximately 30 minutes south of Hue. I think it is a popular stop for some day trips, so I was glad to see it as well. This old Japanese wooden bridge (which looked a bit similar to the Japaense bridge in Hoi An, but smaller) is situated in a small village and surrounded by some lovely fields and rivers.
Thankfully the rain stopped when we arrived, so we could walk a bit around. Our own guide showed us a bit around, explained a bit about the bridge, and we then headed to a little museum that had exhibits from the rural life. It included several items the locals used, from farming tools to old kitchen equipment. A local woman showed us around in the museum, and it was actually quite interesting. Afterwards we had a little bit time to explore the little market, and enjoying the surroundings. Our guide was always available to ask questions – or translating for us to find the bathroom in someone house’s. 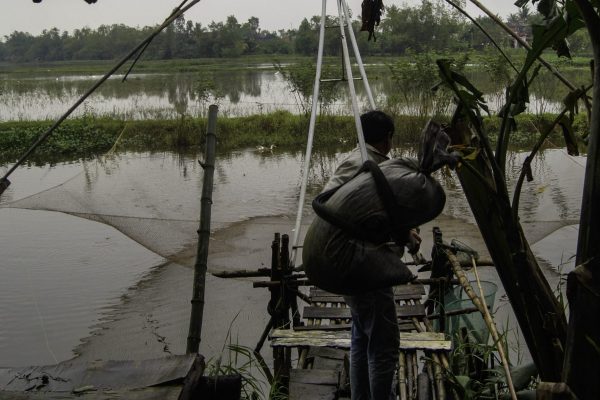 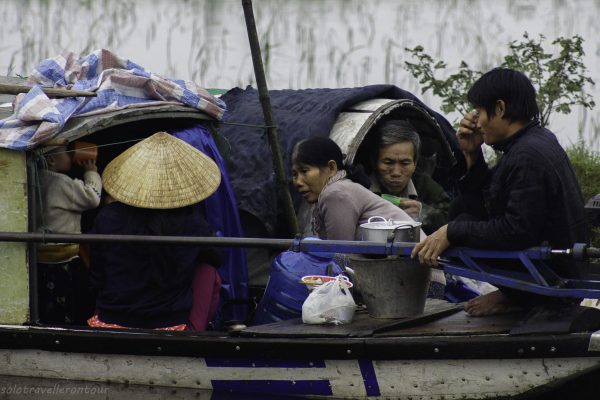 Family having breakfast on their boat 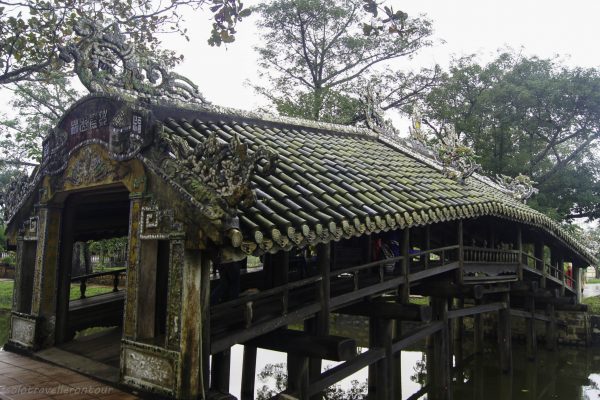 It was a nice place to stop by, but after 30 minutes we were back in the bus. Just in time – as it started to rain. We drove on a little path – with a lake on our right side. The view was actually very nice, seeing the locals fishing from their little boats – ignoring the rain. I took over the role as window opener – to allow everyone to take pictures and trying to keep myself dry. It was a great way to get to know the other people on the bus. Overall it was a good mix of people, and there was a nice atmosphere.

Going up and down some little hills soon we arrived at our second stop – the Lang Co Beach. You first stop at a tourist shop selling everything from pearls, paintings, sweets. Not buying anything we then headed through a hotel to get to the pool area, from where you could see the sea. It was definitely not beach weather. It was raining, the sea was rough – so we all just stayed on the view point. Nice view – but when it is raining the stop isn’t really exciting. I assume the tour company get some fees for stopping by.

However, the driver was very kind. He drove from the parking space as close as possible to the front door to help us keeping dry – yep the rain got worse.

We were then off to the stop I was really looking forward to – the Hai Van Pass. Being able to walk around there was the main reason to take the bus. We slowly climbed up the mountain, following a windy road. However, as it was my luck I saw only a glimpse of the view – as the fog on the mountain was quite strong.
On top of the pass you can walk up a little hill, where I spotted two old bunkers. the view from here on a clear day must be majestic. Well – I saw a bunker and fog. Since my trip to Sapa I became a fog expert, and after some checks and tests my assessment concluded that the fog was as annoying as in Sapa!!!
Next to the parking slots are several stalls of locals waiting for the tourists to arrive – and attempting to sell drinks, snacks and souvenirs. While some of the group check the stalls, I was lucky enough to get some kind of view on the other side of the pass. Unfortunately it was still not full clear. But I took anything I got. 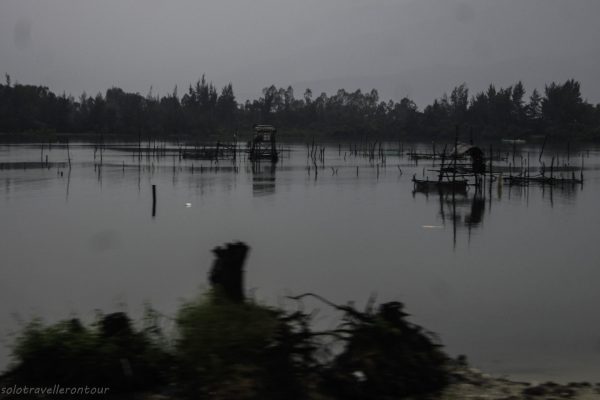 Passing quite a few rivers and lakes used by local fisherman 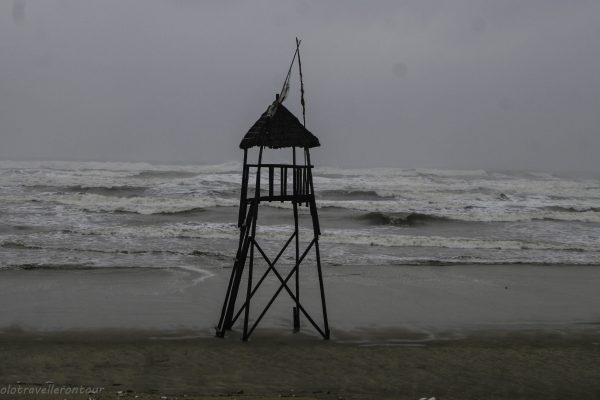 The beach was deserted thanks to the river 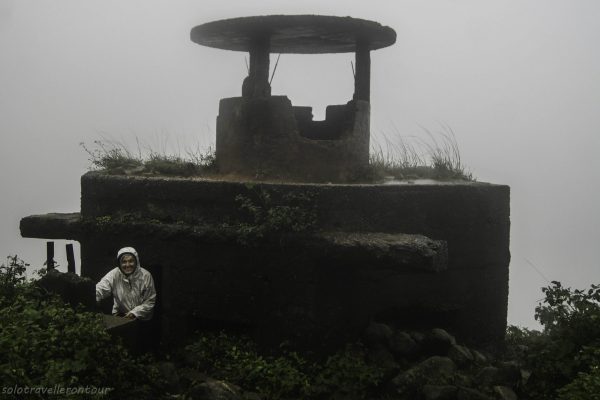 A bunker on top of the Hai Van Pass

Then it was time to head down again. The road was still a bit windy, and soon enough we were near Danang. The next stop was the Marble Mountain – or so we thought. But instead we had a brief stop at another big store, that focused on marble and stone statues. The products were stunning, massive (definitely not suitable for your hand luggage) and out of my price range. But it was nice to look around – but this stop was not needed at all.

We were then back on the road, passing the nice looking beaches of Danang (well – they must be lovely if there is no rain), and soon enough arrived at the Marble Mountain. Even before we arrived I knew we won’t make it to Hoi An by 13:30 – as it was already 13:30 and we had one hour time to explore the area, and then some time for some food. Thankfully I was in no rush, and I was actually looking forward to walk around.
The rain even stopped – but still I decided to be lazy (shocking news – I know), and took the glass elevator to the top of the mountain. Please note, if you want to use the elevator don’t buy the ticket at the stall next to the stairs, My excuse was that the stairs looked very slippery. So I rather paid the 5,000 Dong one way – in addition of an entrance fee of 15.000 Dong. Well – at least you get a great view of the surrounding area when stepping out of the elevator.
On the Marble Mountain you can actually find a collection of temples, shrines and caves on the mountain. The caves are not deep or small, but some of them are stunning, with some shrines embedded into caves. In addition there are several great viewing points. One of them cannot be reached by stairs, but you have to climb up some rocks – but the view was a great reward. I have spent 45 minutes there, and still have missed things. I could have stayed easily 1 1/2 hours there. Definitely worthwhile a visit if you are nearby. 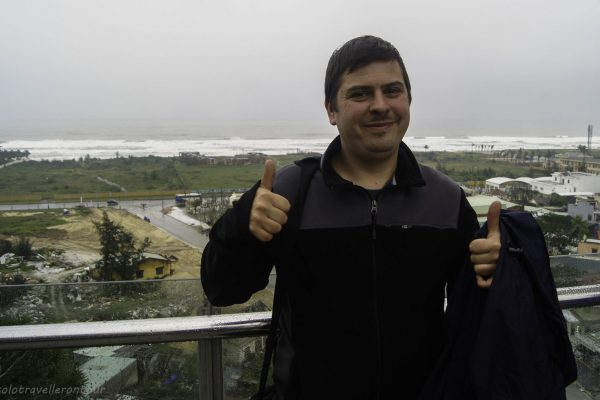 Thumbs up for better weather 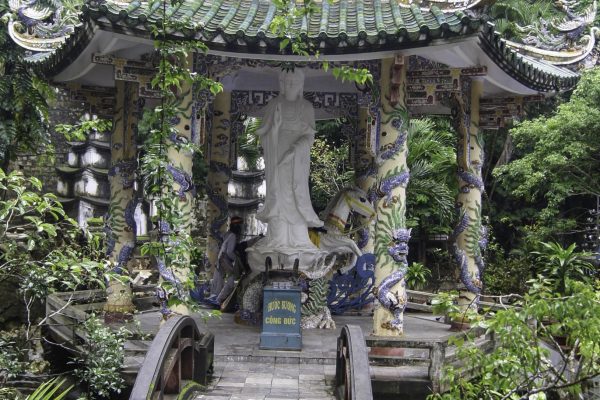 Little pagoda on the mountain 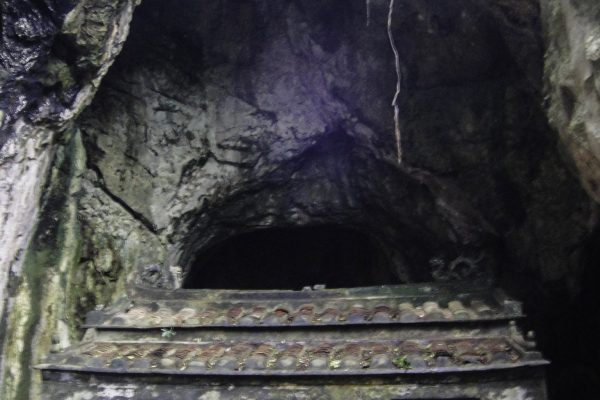 One of the shrines inside the mountain 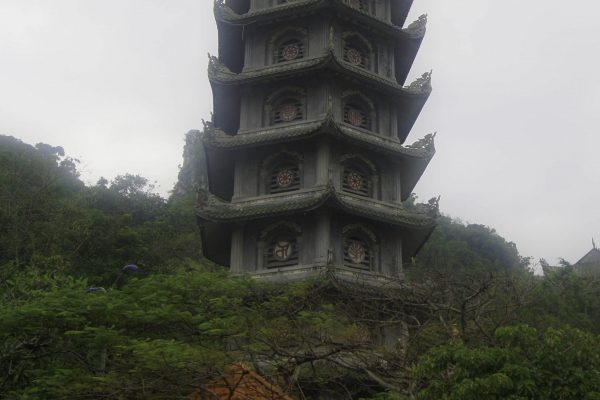 The temple on top of the Marble mountain 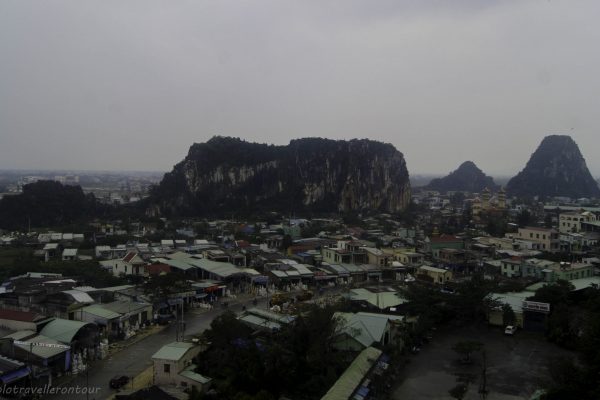 The reward for climbing slippery stairs and rocks

After all the walking I was surprisingly hungry, and we all met at a little restaurant opposite the entrance to the elevator. And a Pho soup was exactly what I needed.

It was then time for our last journey. However, we got a little surprise while we had lunch. Our guide asked us where we were staying, as a drop-off at our hotels were included. No one knew it – but it was a great extra.

The last part of the journey took us first through Danag (with some further explanation of our guide), and around 45 minutes later we finally arrived in Hoi An, which concluded my adventure in the Hue region, and the next one started.

Overall, I must admit it was actually a nice way to travel between Hue and Hoi An. I have missed a spectacular train journey, but I have seen some areas that I would have otherwise missed. While the stop at the beach and the other store was a bit of a waster (especially with the weather), I fully enjoyed the stops at the bridge, Hai Van Pass (despite the fog) and the Marble Mountain.
I didn’t expect to arrive 2 hours later than planned according their itinerary, but I understand that the rain slowed us down. But even in good weather there is no way they can make the whole trip plus the stops in 5 1/2 hours. Drop the stops at the stores and it might be possible.

Still, I think the journey is a great alternative to the 2 1/2 train journey between Hue and Danang. You get picked up at your hotel, and get into Hoi An – so you save a bit hassle as well. But especially in the summer it must be great to walk around on top of the Hai Van Pass – with an absolute great view. And that the train cannot provide.