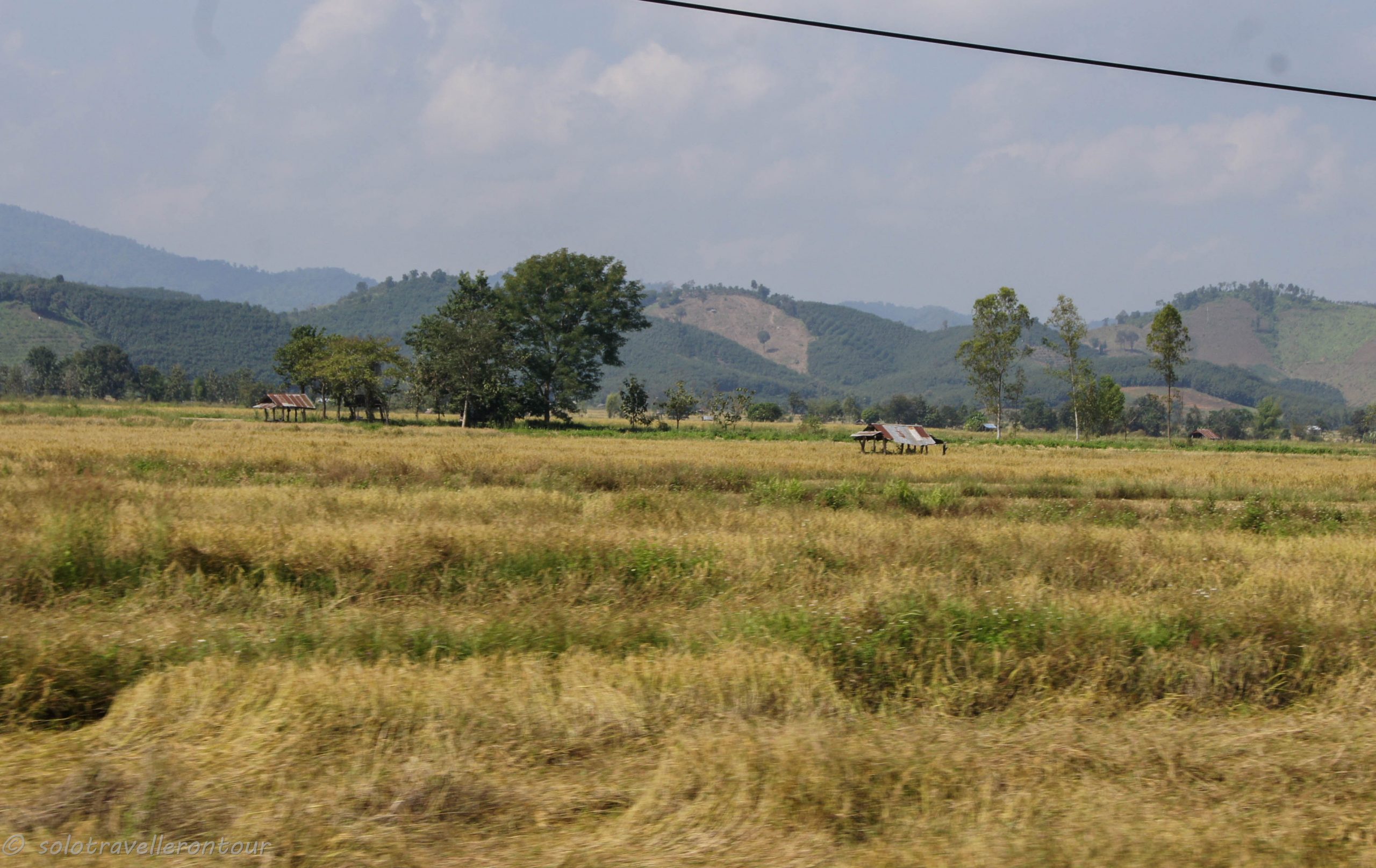 After two nights it was time to say goodbye to Thailand, and head into Laos. In the north the most popular border crossing is Chiang Khong – Huay Xai. I crossed that border two years ago – using a boat to get over the Mekong, which is the natural border in this area. It was straightforward, and no need for Tuk Tuks. Well, this has changed now. In 2013 the Friendship Bridge 4 has opened, which is a bit outisde of both Chiang Khong and Huay Xai.

From Chiang Rai you have two option to do this crossing. Option 1 is using the organised trips that is offered by all agencies. It includes a trip by minibus from Chaing Khong to Huay Xai, and the ticket for the 2 day slow boat trip from Huay Xai to Luang Prabang (not including accomodation in Pakbeng). The minibus leaves around 8am in the morning, and you get to the slow boat straight away – and you don’t have to worry about transport to and from the border. The price for the service is 1550 Baht. A possible disadvantage is that you arrive as one of the last person at the boat – meaning all good places are gone on the boat.

The second option is you use public transport to Chiang Khong, then Tuk Tuks to get to the border and to Huay Xai, and book your boat ticket in town. For this option you really have to stay overnight in Chiang Khong or Huay Xai. But it might be cheaper.

I decided to do it on my own – it sounded more fun. The buses to Chiang Khong leave every half hour from the Old station – every full and half hour. The journey takes around 2 1/2 hour, so in theory you could do a bit of sightseeing, and take the bus in the afternoon.

After having breakfast I headed to the bus station after 11am. For some reason most money exchange places were either closed or didn’t sell foreign currency. Well – I needed US$ for the Visa. I am sure there will be a money exchange at the border.

So off I went, bought my ticket for 65 Baht, and saw this lovely old bus again – without A/C but with a few fans around the bus and windows you can open – and the journey only take around 2 1/2 hours 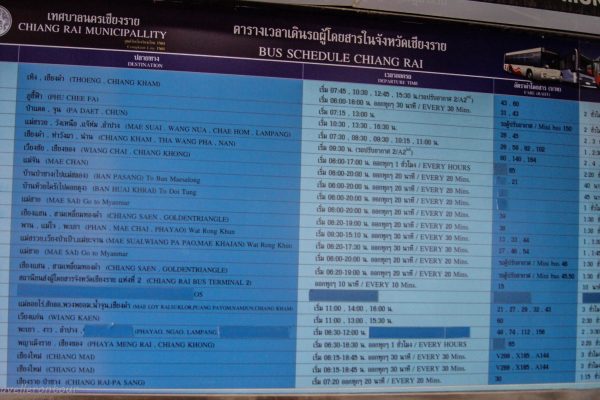 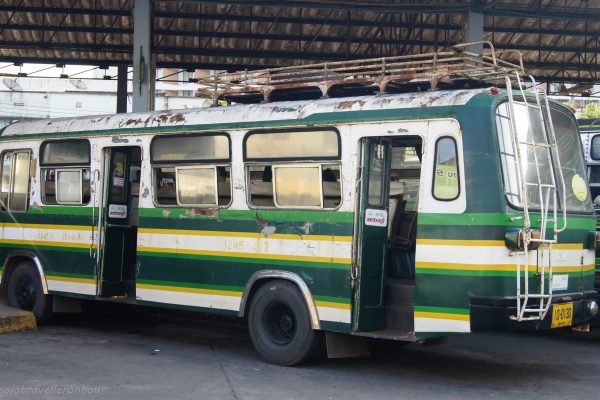 THe buses heading to Chang Khong

I took my seat, and as there was no place to put your small bag above you, it ended up on the seat next to me. However, the bus got busier, so I decided to sit in the single seat in the front, where there was enough space for backpack (the main one stored in the back). before we left the station I saw the bus leaving at Noon, and that one looked much more comfortable, and with A/C. Well – tough. We left on time with a full bus, and went our way to Chiang Khong. The route we used was very scenic. However, I realised quickly that I probably had a seat that would mean certain death in an accident – no seatbelt, directly at the front window, no space for my legs to put in front of the seat so had them sideways. In addition I had to open the side window for cool air, but it meant I had to be careful leaning against the seat, as I could literally fall out of the window (I decided falling asleep was maybe not a good option…). On the plus side – I had a great view during the drive. Unlike other bus trips we didn’t collect any more passengers, but only let people off the bus. 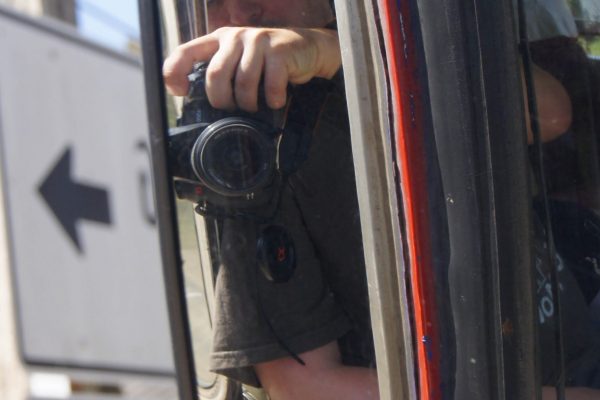 No leaning out of the window 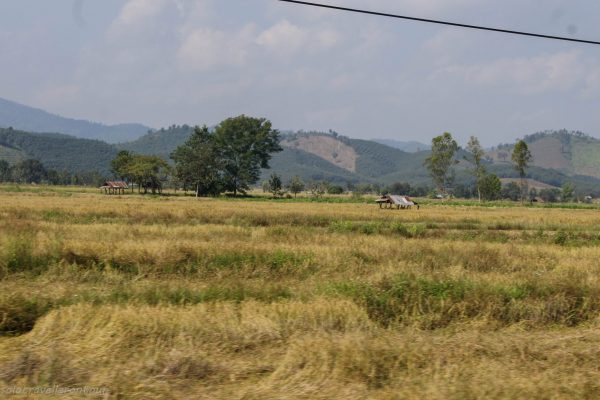 Scenery on the way to Chiang Khong 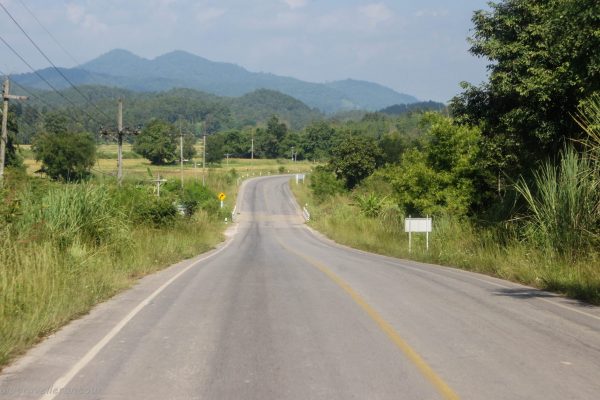 Perfect view from my seat

If you want to cross the border, but not heading in Chaing Khong the good news is that bus stops at the junction for the border – around 4km away. At this junction a few Tuk Tuk await, and will put a few people (in my case 2) in one Tuk Tuk and head straight to the border. No need to bargain, there is a sign at the stop indicating that the trip costs 50 Baht per person.

A quick ride later you arrive at the Thai side of the border. You can head straight to the passport checks, handing over your departure card. However, I was looking at the money exchange, but it was closed. I was told I can exchange money after the passport check.

After getting through all formalities you have to buy a ticket for the bus that takes you to the Lao side of the border – cost 20 Baht. The woman at the counter also asks if you have US$ for the Lao Visa, and I thought – great I can exchange money here. Lucky me? – WRONG!!! Clearly knowing you need US$ they try to rip you off. The current exchange rate was $1 – 32 Baht. Well they wanted 40 Baht for $1. When I highlighted the exchange rate she just told me it is more expensive to pay in Baht for my Visa. Well – I said politely I rather pay an official higher price over there then giving them an extra income. I got the impression they keep the official exchange booth closed, to make some extra money. I was rather pissed off with that attempt, and was actually glad to leave the country. It is one thing to get scammed by Tuk Tuk drivers, but by officials of a country is something different. Well – she was not happy I went for it – tough!

The bus journey only takes a few minutes, and you arrive at the Lao immigration. Here is the good news – you can get US$ here. So whatever you do – DO NOT exchange money at the Thai side.

As not a lot of tourist arrived at the border the waiting time was rather quick, and you then have to pay for the Visa – it was $30 for Germans, and $35 for Brits and US citizens (here is a summary of the various fees). After 5pm and on weekend you also have to pay either $1 or 10,000 Kip overtime fee. You even get a separate receipt for the fee – so it is not a made up fee (official sign at the counter as well).

After you get your passport back, just walk past the passport check, and a number of Tuk Tuks are waiting. They try to get in as many people as possible, and I heard a few tourists had to wait for a while until more people arrived. This was much better on the Thai side. You have to pay 20,000 kip per person. The ride takes around 15 – 20 minutes, and you will arrive at the main street where the old border crossing was – and the location for a number of guesthouses.

You can buy tickets for the slow boat in all guesthouses. I got mine at the BAP guesthouse, and paid 240,000′ and included the ride to the boat landing and as usual excludes accommodation in Pakbeng. If you buy the ticket at the boat landing it is only 220,000 Kip, but you still have to pay for the Tuk Tuk. This way makes it slightly easier.

Now it is time to compare the costs of an organised trip with the DIY trip.

So doing it yourself is around 400 Baht cheaper, however you have to stay a night in Huay Xai or Chiang Khong. If possible I would recommend crossing the border in the afternoon. It feels less rushed though, and importantly, you are on the boat earlier, and get a better seat (no one takes notice of seat numbers). The last people arriving on the boat came from Thailand the same morning, and only got plastic chairs – not very comfortable for a 7 hour boat ride. So if you have time, I would recommend the DIY trip (and enjoy a night in Huay Xai). If you have lack of time, the organised trip might be better as it saves you time.