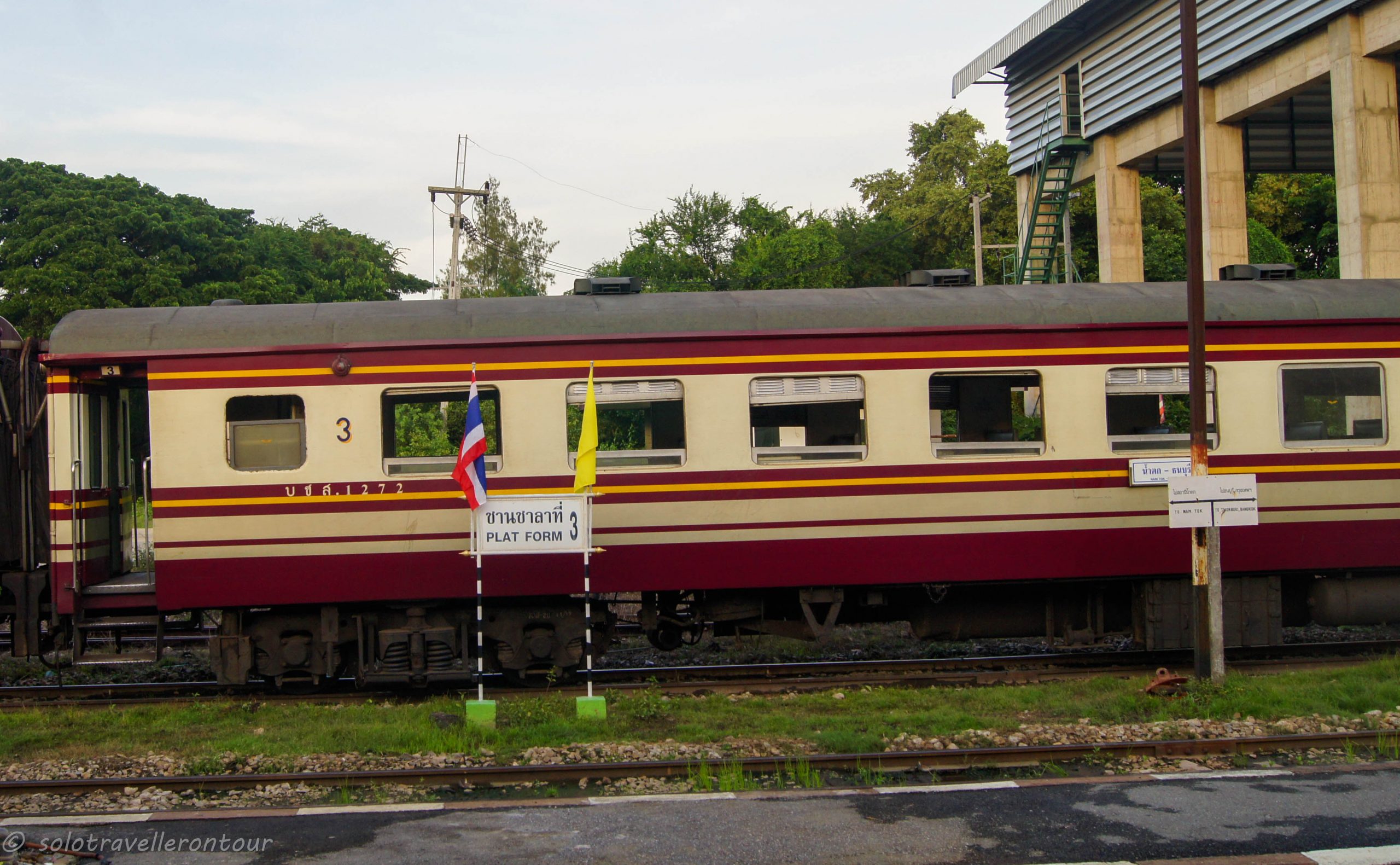 1. From the air to the water – the start of the journey

It was time, after planning my trip to SEA over the last two month it was finally time to enter the plane that will bring me from Europe to SEA – Thailand to be precise. I won’t bother to talk about the flight – as long it arrives in one piece, in time and with my luggage I am happy. And all three boxes were ticked.

So I was in Bangkok – again. Immigration was painless as usual (however, as usual I joined the wrong queue once again – it took much longer than the one next to me). At least no one asked for a return flight again – as it is in February questions might have been asked (one person I met was asked to book a flight that leaves in 20 days). I think my honest face must prevent such questions!!!

Like last year I decided not to stay in Bangkok, and headed straight to the train station. It only took 5 minutes and 2 people at the taxi counter to understand where I wanted to go – to Thanburi train station. Apparently I have lived too long in the UK – I pronounced Th like th – in Thai it is just T. Well – now I know after looking like an ignorant Farang (it won’t be the only time during my trip – I promise!!!).

Well – finally in the taxi, the driver tried the usual scam – offering me a good price for a friend and not using the meter. This is illegal, and shouldn’t happen if you get a taxi from the official airport line. Good price Mister – only 600 Bhat. Yes, I am sure I pay less than using the meter – nice try. Use the meter or I leave the taxi (having his ID number to report him as well). Well – he said his meter doesn’t work. But when I went for the door the meter went on by magic. It turned out the friend price would have been 50% more expensive. For all his trouble I was kind enough to give him 0% tip.

Arrving 1 1/2 hours before the train departs I thought I could get some food. But despite a market area next to the Thanburi train station there was no place to sit down and have lunch. The market was empty despite some stall owners having a nap and a few big rats running around. Thought it wouldn’t be a good idea to chase them for proteins. Instead a small cart appeared opposite the station, selling some great Papaya salad. Oh yes, how much did I miss that healthy food. Delicious as usual. 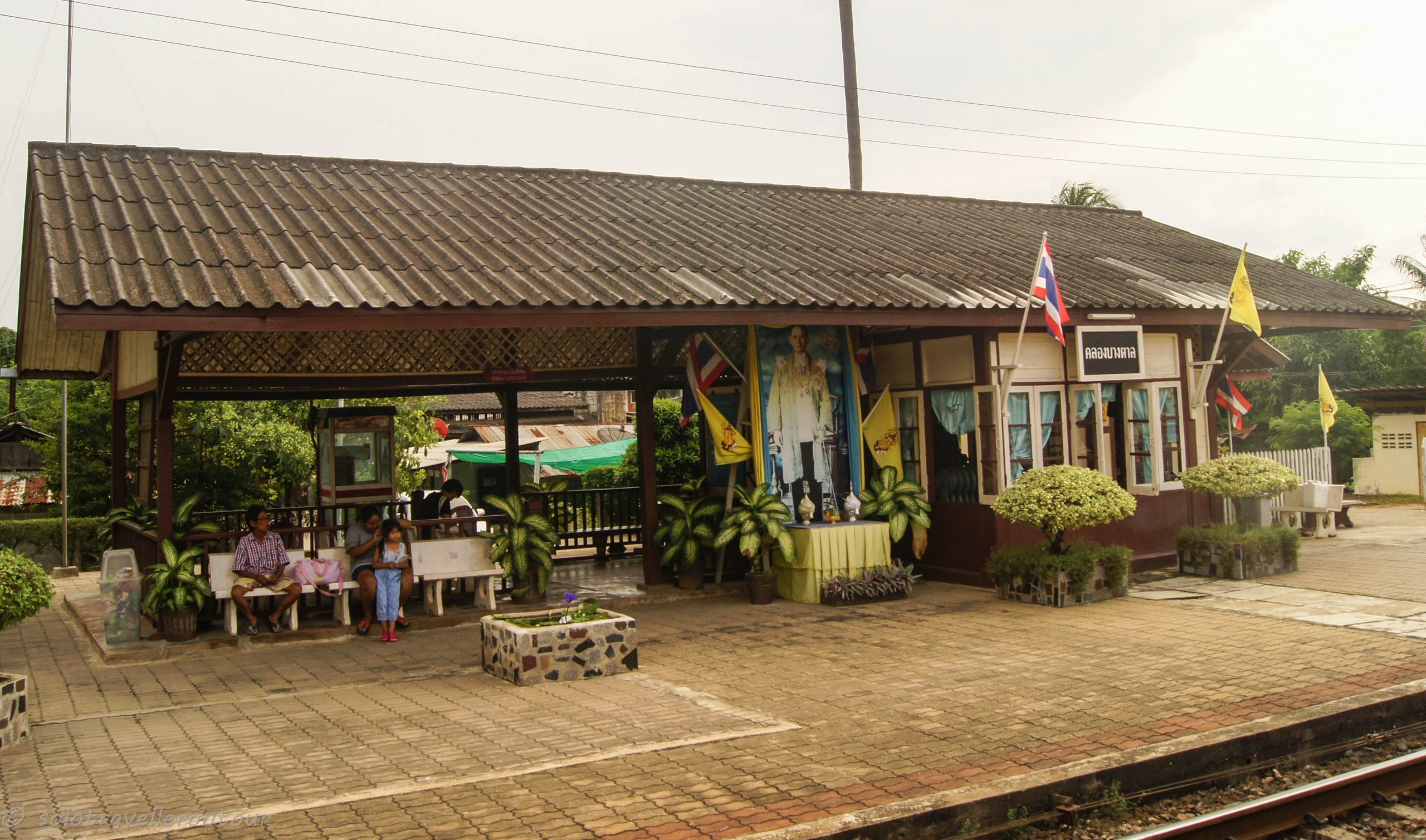 The ticket for the train leaving at 13:50 for Kanchanaburi was 100 Baht. The 3rd Class train has only hard wooden seats and no A/C, but with fan and you can open the window – when it is not raining. Which it did, of course. After a little fight I managed to close the window – unfortunately we were unable to open it again after the rain stopped and it became a little bit hot. A nice Thai tried to open it – without success. Then the train conductor tried – and managed it after 5 minutes. I was waiting for the earth to open for me, as I felt like an idiot – again.

The journey itself is very nice, with some beautiful scenery to enjoy while the train made its way to Kanchanaburi. As it is a single line we had to wait several times at some stations for the trains going the other way. As soon we stopped it was time for vendors getting to the train to sell food, fruit and drinks through the window. During one of the stops I hesitated a bit, but decided that some pineapple would be nice. So I was leaning out of the window – and obviously just at that moment the vendor drove off. Great – no fruit for poor me. Seeing my face the Thai passengers felt sorry for this unlucky Farang, and suddenly everyone offered me some fruits from the bag they bought in time. I accepted some with a big smile. This is just one the situations where you feel how polite and friendly people in SEA are. 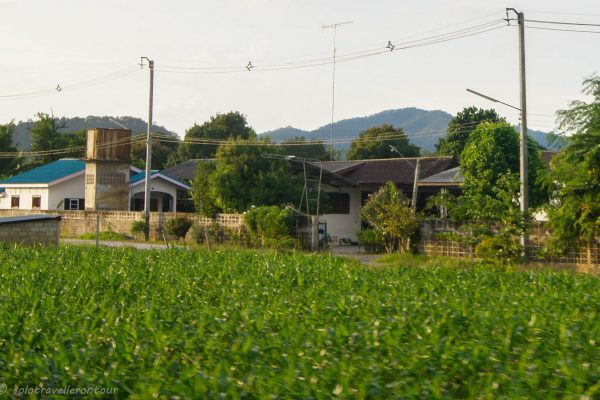 The train passed quite a few villages 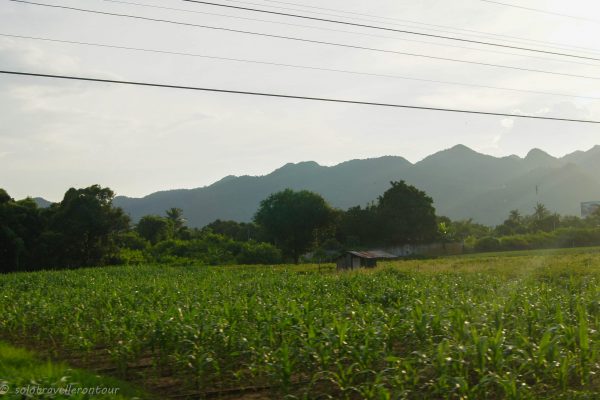 View from the train

Overall it was an enjoyable train journey,  with only 1 hour delay we arrived in Kanchanaburi just after 5pm. After leaving my flat 26 hours ago I arrived at my first stop of my trip. The journey through SEA has really started now.